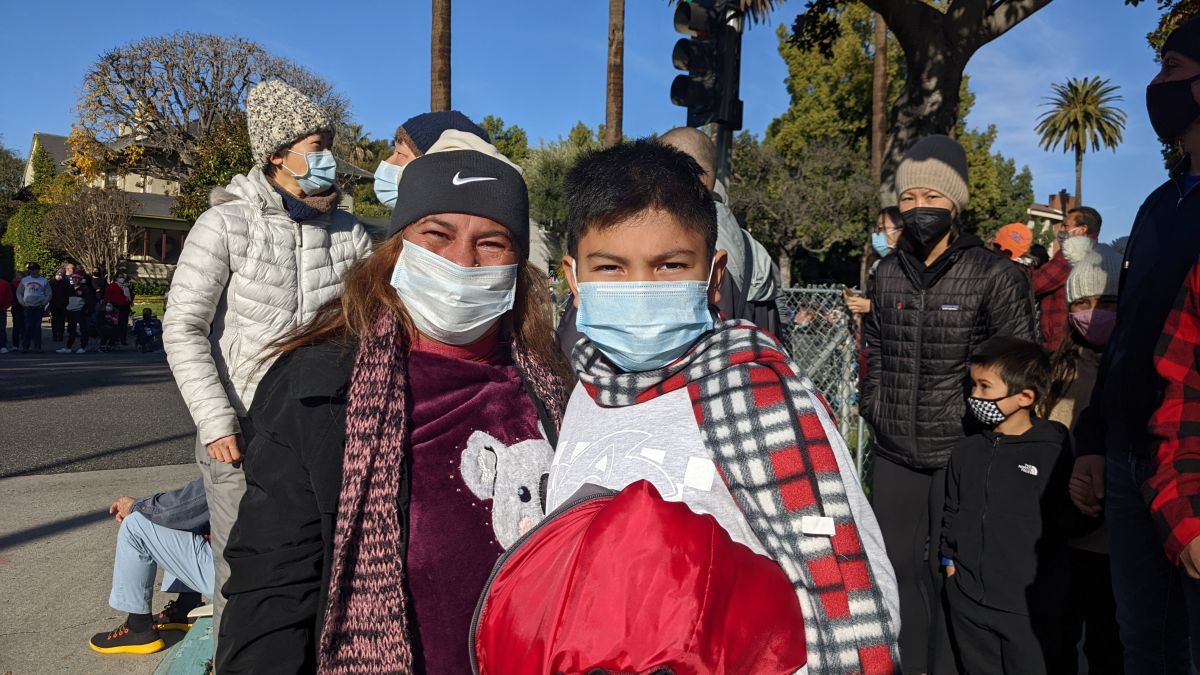 After a year without an audience in Pasadena due to the health emergency caused by covid-19, this January 1, 2022, the Rose Parade returned live and in all its splendor.

The parade featured 42 floats, completely decorated with flowers, organic material and seeds; in addition to 20 musical bands, 18 equestrian teams, among other groups, that traveled the five and a half miles on Colorado Boulevard.

Unable to contain her excitement and on the verge of tears, Mireya Cárcamo —who found a place almost at the beginning of the route— recorded the musical bands that passed by for the memory. Said she’s a parade fan and
who wanted to share it with his son, Jonathan Cárcamo.

“Last year we couldn’t come because they canceled it due to the pandemic… That’s why I’m very happy and glad to see it. [en directo]”, He expressed.

Cárcamo, like many other people, also feared that this year the parade would be canceled again because in the last weeks of 2021 the cases of covid-19 and its omicron variant increased significantly in Los Angeles County, which closed the last day of the old year with 27,019 infections.

Given this, representatives of the parade assured that they were closely following the situation and in the end they chose to carry it out.

The Gómez family was also in the stands, who arrived very early to get their seats. Family patriarch Alejandro Gómez said they were grateful that the pandemic had not been an impediment to carrying out the parade. He indicated that he was confident that with time, everything will improve but that for now it was key to follow the recommendations of the health authorities in massive events, such as wearing face masks at all times.

His wife Érica Gómez, a native of Pasadena, said that from a very young age she has been part of the audience and that now together with her husband, they share the tradition of the first of the year with their children.

“We are very happy to be able to come again and take care of the covid,” he said.

Her daughter Melody said she enjoyed seeing the horses, floats and dancers of the musical bands go by.

A short distance away was Paola Melgarejo who arrived with her family and said that the opportunity to be there was a miracle since they had never seen the parade in person.

“For so many years we have grown up watching the festival on television and seeing it live is like a dream come true and a blessing. We were lucky to receive these gift tickets and we are very happy ”.

Although this year musical groups from other countries did not perform, as is customary, Latinos were represented by the Los Angeles Unified All District Honor Marching Band, made up of students from all over Los Angeles and many of them Latino.

Gabriel Duarte, the group’s coach, said that the group has around 240 members and that they were very grateful to see the crowd supporting them.

“We are very excited to represent our community,” he said quickly as he went along giving instructions to the students.

Tanya Ortiz Franklin, a board member for the Los Angeles Unified School District (LAUSD), previously said the students were participating in a Los Angeles tradition.

“I think it’s really beautiful that kids from across the district and various schools come together to practice the songs they have learned and proudly represent our school districts,” he expressed during band training.

Tony White, director of the band, added that this was the group’s 49th participation in the ‘Rose Parade’.
“The children here represent the good things in our district,” he added.

One of the best moments of the event, and one that shook the excitement of those present, was seeing four Army paratroopers jump from a plane and fall in a specific place on the parade route.

They were also highly appreciated, the musical presentations of the Hot 8 Brass Band, from Louisiana, as well as the singer Jimmie Allen, who closed the event.

Wary against the omicron

Along the parade route, many people could be seen wearing the mask. In designated ticketed areas, people were not allowed to pass if they did not show their vaccination card or negative covid-19 test along with their identification.

Although the parade generally went smoothly, the Kaiser Permente Hospital – which presented its float entitled “A Healthier Future” – sent a last-minute statement announcing that the 20 front-line medical heroes who were scheduled to participate on top of the float and walking alongside, they would not participate.

“We must prioritize the health and safety of our front-line medical staff and ensure that we are able to treat patients during this recent surge in COVID-19 cases caused by the omicron variant,” the statement said.

This float presented children of different races studying science, in the fleet there was also a small bear that bore the name of ‘Booster’, similar to the reinforcement of the vaccine against covid.

Organizers of the parade said they did not regret running the parade in progress, especially since several of the floats were intended to honor the scientists, teachers and front-line workers who stepped up to tackle the pandemic.

One of the floats, the AIDS Healthcare Foundation, presented a fleet with the message ‘Let’s Vaccinate the World’, and decorated with flowers, it featured a figure with a vaccine in hand.

Thousands of people came to the parade of roses; It is estimated that about 40 million viewers followed him through different channels.

On the last day of the year, Los Angeles County closed with 27,091 new positive cases of covid-19 and 12 new deaths. The public health department estimated this to be an increase of almost twice the number of cases in two days and about 1 in 4 people testing positive.

Organizers of the parade said they did not regret running the parade in progress, especially since several of the floats honored scientists, teachers and front-line workers.

Thousands of people attended the parade of roses and it is estimated that around 40 million viewers followed it through different channels.