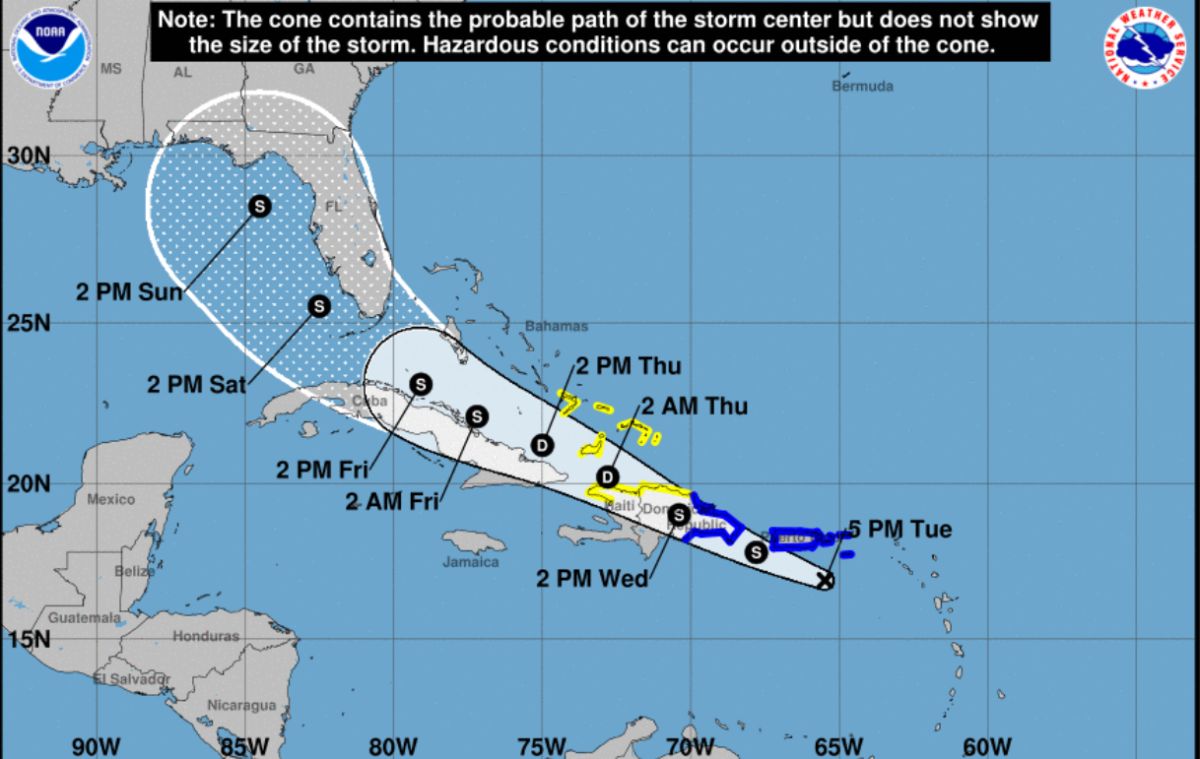 A localized disturbance in the eastern Caribbean Sea is likely to become tropical storm Fred tonight as it will bring heavy rain and gusty winds to parts of the Caribbean islands for the next few days.

Fundamentally, the impact it could bring to Florida if it becomes a tropical storm possibly during this weekend it has not yet been specified, but it will be possible to do so in the coming days.

The National Hurricane Center (NHC) has designated the low pressure system that spreads rain and thunderstorms in the eastern Caribbean Sea as “Potential Tropical Cyclone Six”.

Here are the 5PM AST Key Messages for Potential Tropical Cyclone #Six (# PTC6), which is still forecast to become a tropical storm over the northeastern Caribbean Sea tonight.

This “potential tropical cyclone” procedure allows the NHC to issue early alerts and warnings for a system that has not been organized well enough to be considered a depression or tropical storm, but is expected to become one, according to weather. com.

Puerto Rico, the Virgin Islands and the Dominican Republic they could also see 2 to 4 inches (locally up to 6 inches) of rain from this system, prompting the National Weather Service (NWS) to issue a flash flood watch for Puerto Rico and the Virgin Islands. until Wednesday night.

Haiti, the Turks and Caicos Islands, the eastern Bahamas and eastern Cuba are expected to receive 1 to 3 inches of rain, with isolated totals of 5 inches.

The official NHC forecast shows that this system is likely to become Tropical Storm Fred on Tuesday night, since it moves generally towards the west-northwest.

The system is forecast to become a tropical storm as it moves over the northeastern Caribbean Sea today or tonight. Tropical storm conditions are expected in portions of the US Virgin Islands and Puerto Rico beginning this afternoon. Https://t.co/meemB5uHAR for more. #Six https://t.co/igfKtTPHlT

Relatively low wind shear and warm water favor some short-term intensification, but the dry air lurking nearby should prevent it from rapidly strengthening.

The forecast also shows Some intensification of the system once it reaches the waters of southern Florida or the eastern Gulf of Mexico this weekend. But this forecast is highly subject to change given all the obstacles from wind shear, dry air, and interaction with the ground that we have described above.

Regardless, it seems that at least one surge of humidity will hit Florida this weekend, causing more frequent and concentrated areas of rain more intense than typical afternoon thunderstorms in the state.

It is too early to determine what other impacts, if any, could be in Florida this weekend.