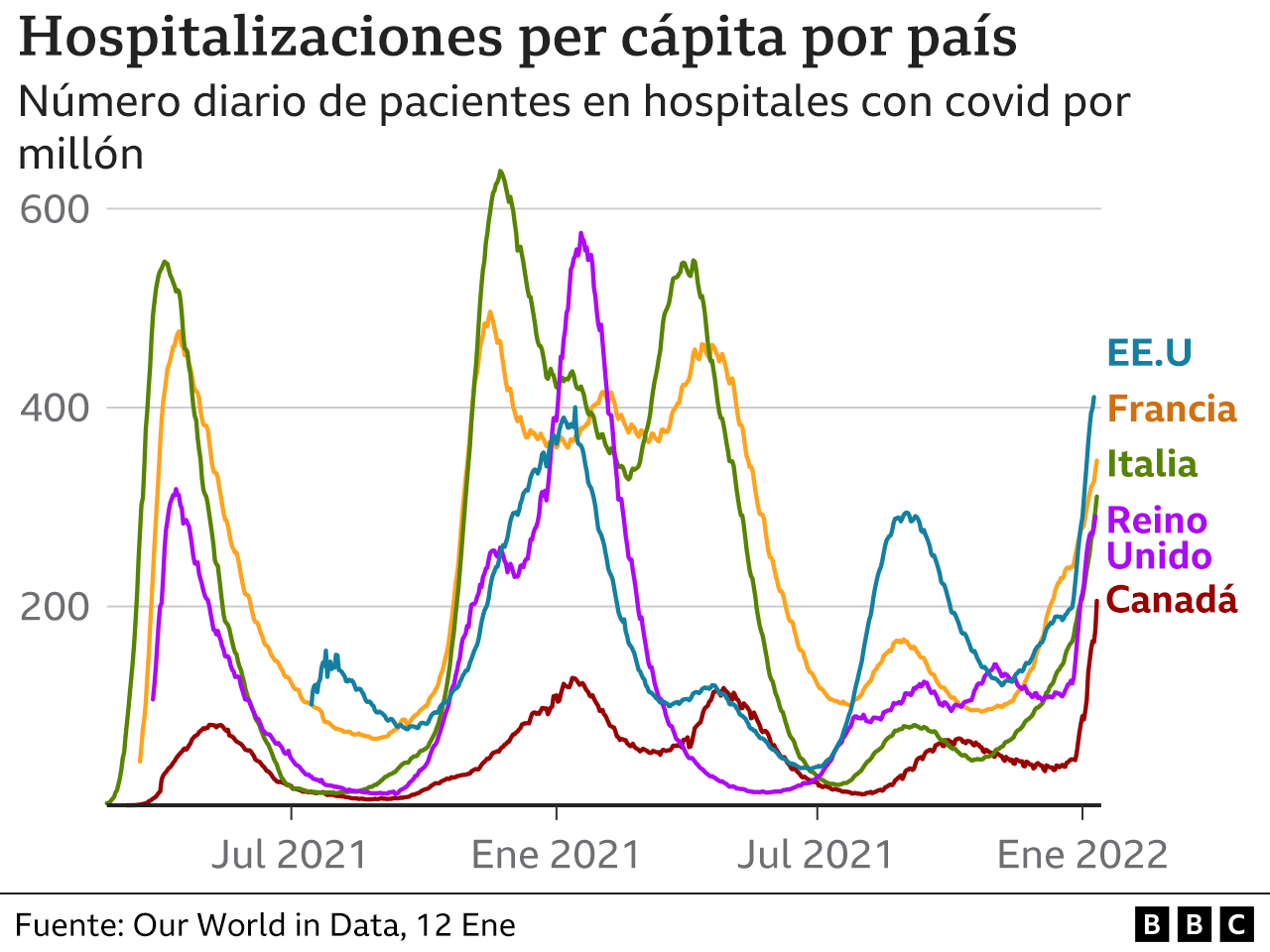 Although the omicron variant is spreading around the world, public health officials in some countries have found that, in most cases, the number of hospitalized COVID-19 patients remains significantly lower than in previous waves. of the pandemic.

But this is not the case with what is happening in the US, where the number of patients hospitalized for the coronavirus has reached record levels. According to official country data, 151,354 people were hospitalized with the virus as of January 14, surpassing the record set in January 2021.

The neighboring country Canada has also suffered, to a lesser extent than the US, an advance of the pandemic in recent days.

What is behind the difference between the North American experience with the current wave and what has happened in South Africa and Europe so far?

For the experts interviewed by the BBC, the US seems to be experiencing a “perfect storm” of the pandemic, with fewer people vaccinated, exhausted health teams, winter, the presence of the delta variant (more serious) while omicron spreads quickly; in addition to the difficulties of access to health units and a population with alarming levels of obesity and hypertension that increase the chances of having severe covid.

What do the US numbers show?

Let’s start with this graph that compares how many people in various countries were in hospital with covid-19 during the pandemic. The comparison has been adjusted for population size and represents a ratio of the number of infected hospitalized patients per million population.

The various spikes represent times when each nation has been hit by a new wave of covid, including the initial outbreak and influx of hospitalized patients, last winter’s spike (in the northern hemisphere), or the summer spike caused by the variant. delta.

The green line, for example, shows how much Italy was affected both at the start of the pandemic and last year, peaking at 638 infected patients per million inhabitants on November 23, 2020.

On the right side of the graph, all countries experienced a large increase in hospitalized patients infected with covid due to the omicron variant. What is interesting, however, is to compare the rate that each country is currently achieving with previous peaks.

For Italy, France, and the UK, we see that the number of hospitalized covid patients remains much lower than in previous waves. In the UK, 286 coronavirus patients per million were hospitalized as of January 13, 2022. Just under a year ago, the ratio was 576 per million.

Similarly, the data shows that in Canada, 242 people were hospitalized per million as of January 16, 2022, compared to previous peaks of 118 in April and 128 in January of the previous year.

What is the impact of the current wave on US hospitals?

Hospitals across the US have reported that the surge in infected patients has greatly increased the pressure on facilities already overwhelmed by the pandemic.

Juan Reyes, director of hospital medicine at George Washington University in Washington DC (which has one of the highest rates of hospital admissions per capita), said this increase “has been much more difficult” than previous ones.

“The challenge we’re facing now is that it’s happening at a higher volume and the structure is a bit thinner,” he told the BBC. “The difference now is that there is a lot of fatigue, in health professionals and in the general population.”

Lewis Rubinson, medical director of Morristown Medical Center in New Jersey, said the current increase in admissions “is about double” its previous record in the winter of 2020, despite less severe infections among patients.

He attributed the rising number of infections in part to increased testing of everyone who arrives at the hospital for any reason. In the US, UK and Canada, newly admitted patients are tested for COVID-19 regardless of what brought them to the hospital.

Still, the “overall impact on hospitals by the sheer numbers is tremendous,” he said. “If you remove even a third of them, that’s still a huge number of patients that we’re ‘treating.’

In the United Kingdom, the heads of the National Health Service (NHS) have estimated that this proportion of so-called incidental cases of covid are between 20 and 30% of cases.

What happened in South Africa?

In South Africa, where the omicron variant was first detected in November 2021, scientists found that people infected with this variant they are less likely to be hospitalized and more likely to recover quickly.

While up-to-date data on the per capita hospital rate of Covid patients is not available, many South African hospitals reported that the number was significantly lower than during previous waves of the pandemic.

The Steve Biko Teaching Hospital in the city of Tshwane, for example, informed the International Journal of Infectious Diseases that the number of infected patients was about half that recorded before mid-November.

The researchers believe that previous waves of Covid in South Africa and the relatively low vaccination rate meant that many residents had likely already been exposed and had developed some level of immunity to the virus.

Why is the US different?

Experts point to several reasons why the rate of hospitalized covid patients is higher in the US and Canada than in most other parts of the world?

David Larsen, an epidemiologist and professor specializing in global health at Syracuse University in New York, told the BBC that the US population is markedly different from that of Europe and South Africa.

“We have an older population than South Africa. Furthermore, the US has a similar age structure to Europe. But there is also a population that is less healthy than Europe.”

For example, Larsen points out that rates of hypertension and obesity (both comorbidities that greatly increase the risk of having severe covid) are higher in the US than in most other countries.

Larsen adds that “it’s incredibly frustrating” to hear Americans play down the constant omicron threat and believe that, like South Africa, the US may soon outrun the current wave. It also highlights the importance of the season.

“The seasonality is also different,” he said. “The omicron boom in South Africa was during the summer, but it’s coming to the US in the winter, when we know more people are gathering indoors and there’s more transmission. That’s going to be bad.”

Mark Cameron, an associate professor in the department of population and quantitative health sciences at Case Western University in Ohio, told the BBC that he thinks the US is experiencing “a perfect storm” of covid-19: comorbidities, unequal access to health care, and hostility to vaccines, masks, and other preventive measures.

“When this ‘perfect storm’ strikes, all these types of vulnerabilities unique to the US combine, resulting in an outbreak of the virus that can quickly lead from increased cases to more hospitalizations, overwhelming hospitals and teams. of medical care”.

Just over 63% of the US population is fully vaccinated, far less than the UK (71%), as well as Italy and France (both 75%), in Canada almost 79% of the population is completely protected, according to data from the Our World in Data portal of the University of Oxford.

Donald Vinh, an infectious disease specialist at the McGill University Health Center in Montreal, said that in Quebec and elsewhere in Canada, up to half of all new admissions involve people “inadequately vaccinated”.

“As a percentage of the population, it is a low number. Perhaps 10% of the population that could have received the vaccine is not double vaccinated,” he said. “They tend to cluster in dense urban areas. When there are highly transmissible variants that can affect an inadequately vaccinated population, that leads to continued spread and the high community transmissions we’re seeing.”

Like the US, Vinh believes Canada is plagued by “inadequate” public health policies when it comes to covid-19. “In other words, there is no single unified method of how we are going to do things in general,” he said. “It is more regional than national, so there are gaps. The consequences of that are hospitalized people.”

And the delta variant?

Doctors also warned that the high level of hospital admissions in the US and Canada may be due to the delta variant is more prevalent in many areas.

A study published last August by The Lancet Infectious Diseases which investigated 43,000 patients in the United Kingdom, found that the delta variant had more than twice the risk of hospital admission than the previous variants.

Monica Gandhi, director of infectious diseases and a professor at the University of California, San Francisco, told the BBC that she believes delta patients make up a significant portion of Covid-19 hospital admissions in the US. But it is difficult to determine. the actual number.

At the hospital where he works, Gandhi added, some patients “are sicker and some less sick, and it seems that both delta and omicron are there.”

What to expect from the pandemic?

In many countries, researchers believe the omicron variant has begun to lose steam, possibly signaling an end to the surge in hospitalized COVID patients.

Projections by researchers at the University of Washington, for example, indicate that the number of daily cases in the US will reach 1.2 million by January 19.

In the short term, however, experts believe that hospitals will continue to suffer from large numbers of patients in the US and Canada, even if they decline in other countries.

“The situation is dire. There really is no other word to describe it,” Vinh said of the pandemic in Canada. “I would love to start seeing a tipping point that tells us we are at the plateau, but now all I see is a slope. It is no longer a slope. It’s a wall.”

In assessing frontline doctors in the US, both Cameron and Gandhi said they believe hospital admissions could peak in February or March.

“It can still be a horrible winter,” Gandhi said. “In the next month, life will be very difficult in schools and hospitals.”