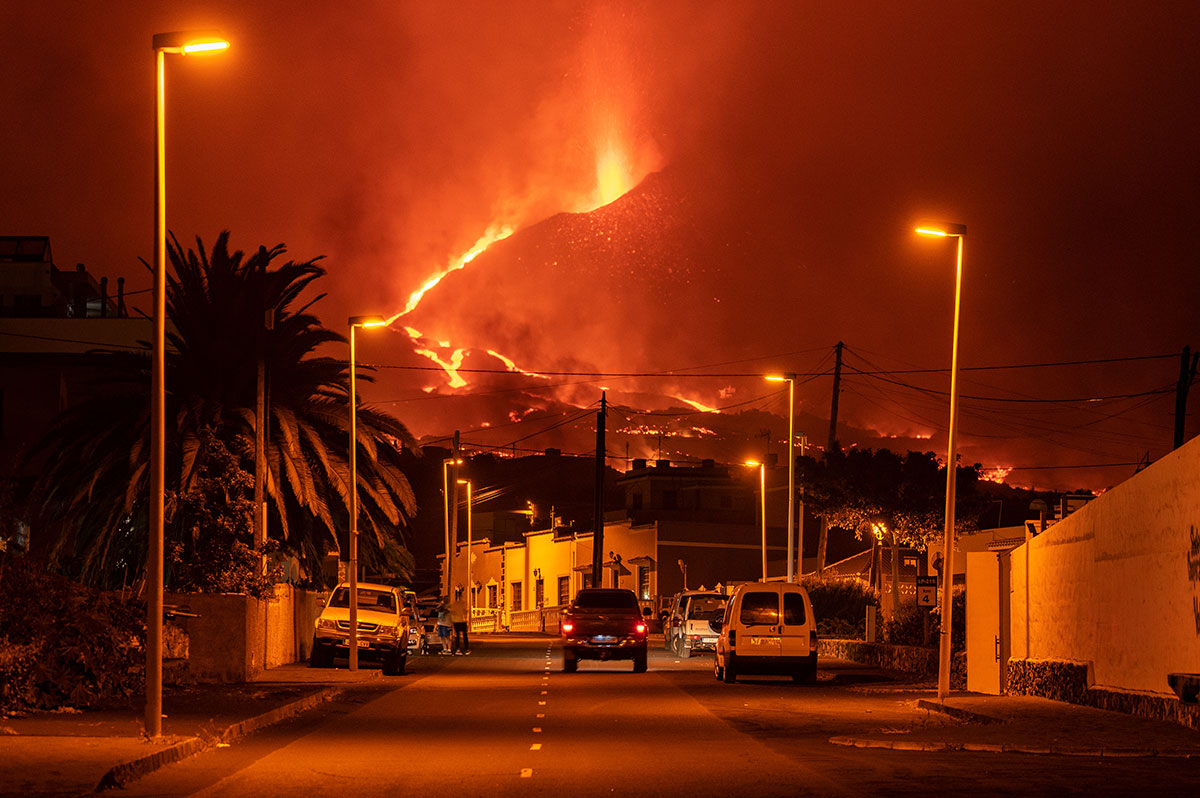 The Cumbre Vieja volcano on the Spanish island of La Palma continues to roar 26 days after the start of its eruption, with a seismicity that has been increasing in the last hours and with the slow but inexorable advance of the lava, which have forced new population evictions.

In the last hours they have registered on the island dozens of earthquakes, according to information from the National Geographic Institute (IGN) of Spain, of which three have been felt by the population.

The highest magnitude took place last morning with a magnitude of 4.5, at a depth of 37 kilometers, after another of 4.1, three seconds before the previous one and at the same depth.

The two arms of the most active lavage of the three that have formed since the eruption began They have slowed down their progress after entering the neighborhood of La Laguna, in the town of Los Llanos de Aridane, already completely evacuated, after taking over a supermarket and crossing the football field.

The technical director of the body that supervises the evolution of the eruption, the Volcanic Emergency Plan of the Canary Islands (Pevolca), Miguel Ángel Morcuende, explained this Thursday that the advance of this laundry in the last hours led to the preventive evacuation of the people who they had not yet been evicted, and according to the census there are about 400.

Also read:  The opposition in Venezuela announces that it will go en bloc to the regional elections in November

On October 12, another 800 had been evacuated with what those who have had to leave their homes at some point since the beginning of the eruption exceeds 7,000.

The director of Pevolca has insisted that these are preventive evacuations carried out with enough time “so that no one feels overwhelmed”, a decision taken after analyzing the traceability maps, but it is difficult to anticipate the place where the lava can flow or if Neighbors will be able to return if progress slows or stops.

In the monitoring of the volcano, no great news has been registered in recent hours, according to the scientific spokesperson of that organization, María José Blanco.

Seismicity continues to be located slightly south of the initial swarm prior to the eruption, with a somewhat lower number of earthquakes but with a somewhat higher magnitude, the maximum of 4.5, an earthquake located at great depth and felt throughout the island.

Also read:  Lava from the Cumbre Vieja volcano in Spain is very close to reaching the sea

Sulfur dioxide emissions from the volcano remain high, with values ​​of 15,995 tons per day, and the height of the ash and gas column reaches 2,600 meters.

The air quality in the last hours remains good or reasonably good, with some higher point measurements of sulfur dioxide or particles that continue to advise the use of masks in the Aridane valley, but for the first time in this episode a measurement has been registered elevated at the Izaña Atmospheric Research Center, on the neighboring island of Tenerife.

The wind on La Palma blows from the northwest, so that the gases and ashes are dispersed towards the southwest, that is, towards the sea, which is good for the operation of the airport.

As of Friday, an arrival of Saharan air is expected that will not affect air traffic, although the decrease in the level of thermal inversion may worsen air quality.

The latest data on the extent of the lava indicate that there are 674.5 hectares affected, 34.23 more than the day before., and the maximum width of the wash remains at 1,770 meters.

Also read:  Families demand the release of 21 kidnapped by the Los Machetes gang in Chiapas

Data from the Copernicus terrestrial monitoring satellites indicate that 1,600 buildings are affected, of which 1,548 are destroyed and 86 affected.

It may interest you:
· VIDEO: Soufriere volcano in San Vicente thus erupted; there are between 15,000 and 16,000 people affected
The chilling testimonies of those who witnessed the eruption of the volcano in New Zealand
· La Palma: what is happening on this Canary Island, the “tip of the iceberg” of a volcanic building 5 kilometers high