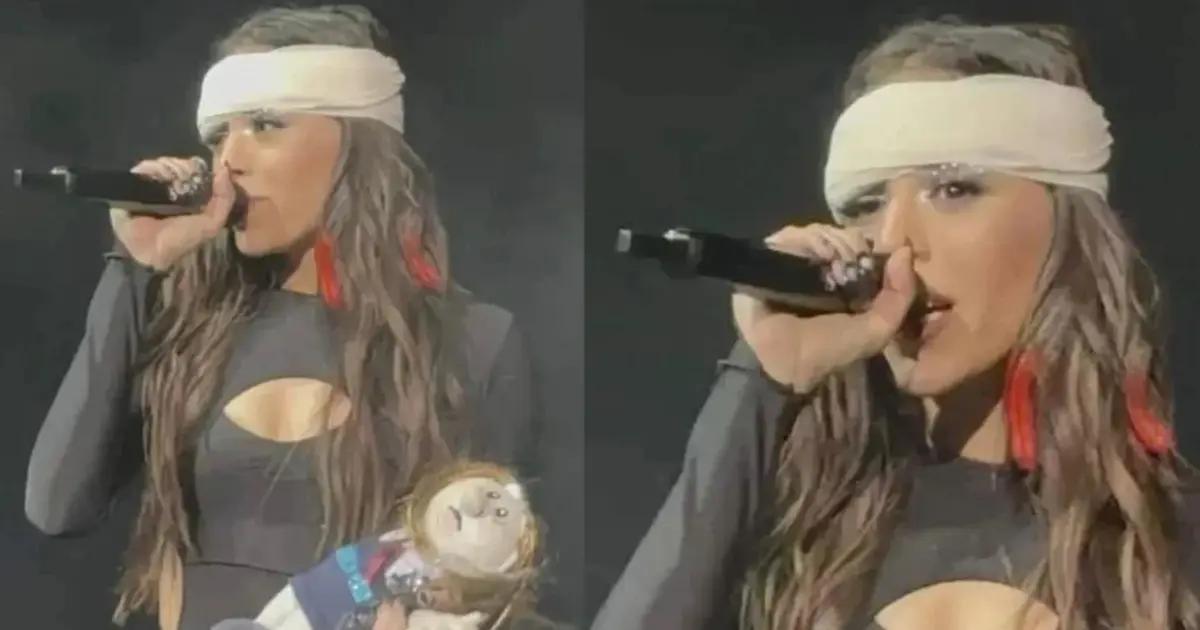 Danna Paola kicked off her long-awaited XT4S1S tour this November 11. The show that marked the beginning of the tour took place in Guadalajara. The singer finally met with her beloved fans after having postponed her presentations for several days due to suppliers not meeting the agreed deliveries for her dates in San Luis Potosi on November 4.

And when she finally started her big tour, she suffered an accident in the middle of the concert. Danna’s version is that she hit herself, and her eyebrow started to swell due to the strong blow, so she stopped the event for a few minutes.

“I split my eyebrow open, literally, no joke. I don’t know if the people in the front row saw it. I’m fine, I swear,” the singer assured her fans before requesting five minutes for the doctor to see her. When she returned, she addressed the audience again and explained what happened, “When I went backward, I think I hit my knee or something and my eye started to swell up. I stopped seeing, and I kept going.”

The presentation continued, and Danna Paola appeared with a bandage around her head that also covered her injured eyebrow and eye. Minutes later, her fans threw her a personalized Dr. Simi stuffed animal as a symbol of affection, a detail that made Danna very happy. Before the closing of her first concert of the tour, she dedicated a few words to her fans and left very grateful despite what happened.

Guadalajara, I’m going to remember this night all my fucking life. They just gave me the best opening night of my life. I’m leaving with a chipotle in my eye but happy, grateful, thank you for your energy, your love. We gave it our all, thank you

Once the first show of her XT4S1S tour ended, Danna apologized sincerely for shortening her set and published a story through her Instagram account where she gave more details about her state of health.

Guadalajara, infinite grace. It is very crazy that this has happened to me, they already put a bandage on me, I have to have cold compresses. But, the size of the bump, literally, of the bruise is this lump that is here. But everything happened, great opening night, XT4S1S tour

For her part, her current partner, the musician Alex Hoyer, gave her words of encouragement and congratulated her on the concert she gave despite her eyebrow injury.

I’m so proud of you and how you pulled this first show off. Congratulations on the start of this great tour that I know will inspire many people, I love you and admire you like you have no idea.

“Professional Danna Paola who opened her eyebrow and continued with her show, proud,” “With a broken eyebrow and half an eye but always fashion with the glitter bandage,” “All my respects to Danna Paola,” “Like the great one who es, she came out to give us more of her,” “A whole star,” “She needs a clean one,” these were some of the comments that her fans wrote on Twitter. Where they thanked him for continuing with the concert, they had been waiting for so long and wished him a speedy recovery.