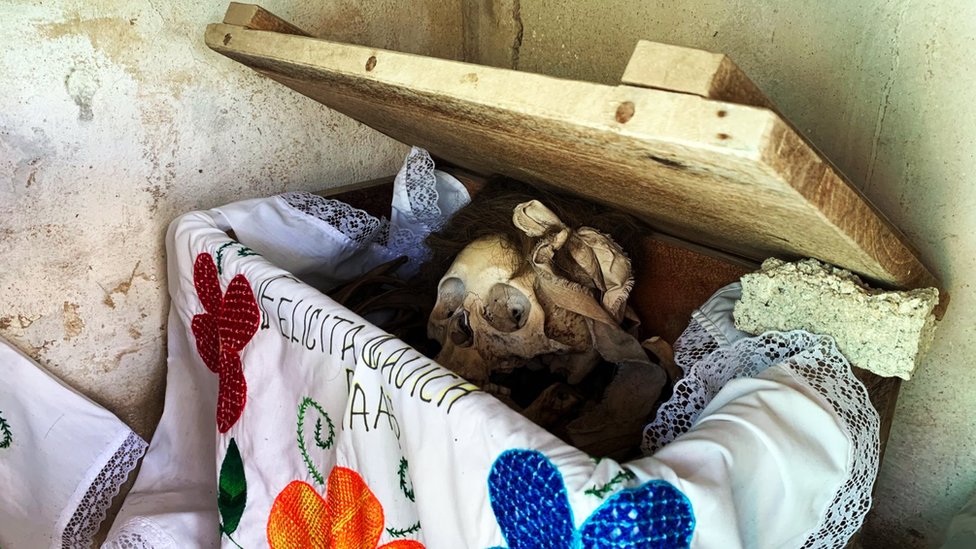 Attention: this article contains images that may hurt the sensibilities of some readers.

When you first enter the Pomuch cemetery you are likely to feel uncomfortable and even scared when you think you are being watched by the watchful eye of dozens of skulls.

Although, during those first minutes of the visit, the person who walks through the narrow and labyrinthine alleys of this cemetery may be even more worried about not touching, much less involuntarily throwing to the ground some of the boxes that contain -and show- the bones of the corpses.

Because if, in this town in the state of Campeche, in the Mexican southeast, the skeletal remains of the deceased rest all year round in ajar boxes that rest in their niches in the cemetery.

However, it is at this time of year, just before the Day of the Dead, when its neighbors star in another curious tradition that attracts hundreds of tourists: cleaning the bones of their relatives.

This ritual, which in Mayan is known as Choo ba’ak, has been celebrated in the town for at least 150 years, according to Hernesto pool, local promoter of this tradition.

“We are based on Mayan cosmology, which claimed that the dead had more than one life. With this tradition of worshiping the dead, we understand that there is life after death, that there is the passage of the underworld and then it returns again ”, he explains to BBC Mundo.

Pomuch belongs to the municipality of Hecelchakán, a hot and quiet place in the Yucatán peninsula.

The relaxed atmosphere that is perceived in its cemetery helps that, after a few minutes, that initial impact disappears during a first visit to the place.

Since mid-October, relatives of the deceased have come to clean the bones of their deceased and have them ready for October 31 and November 1, days when children and adults are believed to return respectively.

Families chat quietly with each other while doing it. Most bring flowers and candles to decorate the niche and also beautiful embroidered or painted cloth with flowers and the name of the deceased, on which the clean bones will rest and which will allow the removal of the one used the previous year.

“With cleaning it is as if they were bathed and with the new cloth it is like changing their clothes, because they are about to come to visit and they have to be prepared. The candles are put on so that they can see the way and can return with us, ”he says. Ricardo Yam, who works painting the niches and who is in charge every year of cleaning the bones of one of his twins, who died at birth 28 years ago and for whom he continues to get excited when he remembers him.

Some neighbors, however, find it hard to personally take care of cleaning the bones of their relatives, so they ask for help from people like Venancio Tuz, gravedigger of the cemetery.

With astonishing speed and tranquility, Don Venancio mechanically cleans the set of bones of those who ask for it in less than 15 minutes.

One by one, he removes the dust from each bone with the help of a brush and places them back in their box on the new cloth.

“The order to clean them is as if they were standing (standing), from the bottom up. That is why on the sides of the box are the ribs, then the leg and arm bones, and the last is the skull that goes up in the center. Hair, as you can see, is never lost ”, he tells BBC Mundo, without leaving his work for a minute.

The gravedigger tells that at least 3 years must pass from death of the person to be able to carry out the first cleaning of bones, once the body has decomposed.

Understand that your job is not suitable for everyone. He says that doing it “was difficult at first”, but that he is already more used to it after 20 years dedicating himself to it. During these weeks you can get to clean up to 15 bodies a day. In return, he asks for 30 pesos ($ 1.5 dollars).

In front of him, two young foreigners observe the ritual in silence while recording with their phone. There are more towns in the area with similar traditions, but it is Pomuch that attracts the most attention from tourists, especially since his practice was named Intangible Cultural Heritage of the state of Campeche in 2017.

The future of tradition

One of the bodies cleaned by Don Venancio is that of the brother of Carmen Naal. She says that her husband usually takes care of it, but that this year she decided to ask the gravedigger for help given the little time left until November 1.

“Also, this time they are dirtier than usual because last year we couldn’t do it because of the pandemic and because my mom passed away. So this year we couldn’t miss it ”, he shares with a smile.

This Pomuch neighbor speaks passionately about this tradition of which she takes great pride. For her, cleaning bones is a “very intimate and close moment, you feel like you are hugging your family with love again ”.

The visit to this cemetery is also marked by the cheerful and striking colors that decorate the niches, many of which are painted again before the Day of the Dead.

“They are painted and cleaned like a miniature house. It is as if the dead moved from home and you have to visit them ”, compares Naal.

She is hopeful that the tradition will not disappear with the new generations and assures that she has instilled in her children that she wants them to continue the tradition with her once she dies, but the truth is that they hardly look young in the cemetery.

One of them is María José, a teenager who accompanies her mother and who assures that the tradition will continue when she is gone.

His mother, Ligia Pool, attend one of the most impactful cleanings: a baby.

Of his daughter, who died just born three decades ago, few remains are preserved but their age is guessed by their size and some small cloth boots that she looks like when cleaning.

“We talk to them, it’s as if we have them with us. His body died, but the person is still with us and these days are to celebrate them. That is why parents instill this tradition in their children. I tell the girl: ‘this is your sister, here she is 30 years old, as if it were yesterday …’ “, she says, holding back tears.

When Hernesto Pool is asked if he understands that many people do not understand his tradition, he answers without hesitation. “This is not something macabre, it is not something scary. In Pomuch death is not worshiped, it is respected and given the value it deserves, which is the step of life ”.

Be that as it may, those who occupy this cemetery will continue after the Day of the Dead showing part of their skulls from their boxes as a symbol that “they are under surveillance, pending from us with his gaze forward and looking towards our world ”, according to the local promoter.

It is in that position that they will wait for 12 months to be meticulously cleaned by their loved ones. “And it is that I believe that the dead of Pomuch they don’t die until we forget them. That is why the importance of this tradition ”, concludes Pool.