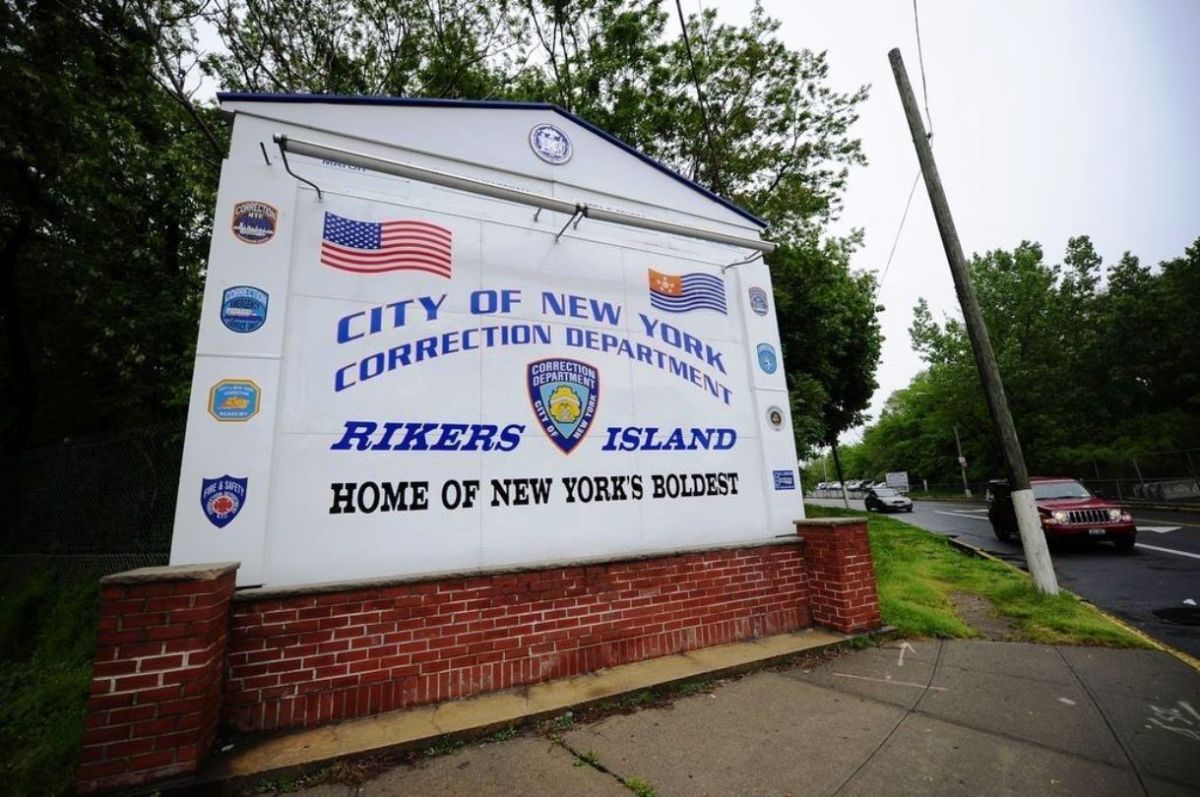 Last august 10 the list of dead prisoners in the jail of Rikers Island so far in 2021 increased to 7 cases, after reporting the death of Brandon Rodríguez, 25. The young man, who had barely been in prison for a week, was found dead in his cell, in the middle of what critics of the infamous prison qualify as one more example of the humanitarian crisis, low personnel, mismanagement and violation of the human rights of the inmates that governs the penitentiary, for which they demand that it be closed immediately, and not until 2027, as planned .

New York political leaders, activists and advocates for inmates, joined together to make a call from different sectors so that the De Blasio Administration reconsider the program Rikers phasing out Island, what currently has 5,847 inmates, and they ask that the closure be ordered once, because violence there and the lack of care and protections are the order of the day.

The intern Brandon Rodriguez he had been arrested on August 4 and was facing a misdemeanor charge of “criminal obstruction of breathing or blood circulation” against another person. A judge had set him a bond of $ 3,000 and a bond of $ 10,000, which he did not pay, for which he had to remain withheld in Rikers, where he died.

Organizations dedicated to the defense of inmates, such as Brooklyn Defender Services, The Bronx Defenders, Legal Aid Society, Neighborhood Defender Service of Harlem, and New York County Defender Services, raised their voices to call for prompt action and solutions to the Rikers crisis, which includes hundreds of prisoners held in dire conditions and health risks due to the COVID pandemic. Among them they demanded to release inmates.

“We are deeply saddened by the death of Mr. Rodríguez in the custody of the DOC (Department of Corrections), and we demand the immediate release of New Yorkers currently detained in unacceptable conditions on Rikers Island and in all New York City jails, ”the organizations said in their joint letter. “As advocates, we have been raising the alarm about the attention substandard and inhumane treatment in these places for many years, but conditions have continued to deteriorate. The pandemic has exacerbated and exposed the deplorable circumstances in which our incarcerated neighbors are forced to live ”.

The defenders highlighted that the prison staff is reduced, affecting the provision of services and care to the prison population of the prison, which has increased by almost 10% since the pandemic.

“Rikers Island is dangerously overcrowded. The prison population has surpassed pre-pandemic levels, while the failure of DOC staff to show up for work has left many of our clients without adequate food, medical care, or access to the basic services that the City has. legal obligation to provide ”, they warned in their complaint. “The solution is obvious: The City must immediately reduce its prison population or cruelly risk more deaths in DOC custody.

They also called on the prosecutors for the way they are proceeding.

“There is simply no reason for prosecutors to continue to seek bail (as was the case with Brandon Rodríguez), which amounts to a possible death sentence for pending charges. We call on the city’s district attorneys and the courts to recognize the role their position on bail plays in exposing people to life-threatening conditions and human rights abuses, ”they said.

The State Assemblywoman Jessica Gonzalez-Rojas regretted the way things are still handled in Rikers Island prison and after warning that the death of Brandon Rodriguez It could be avoided, he demanded that the City not continue to turn its back on what is happening in that prison, and that it order the closure of the jail now.

“Rikers Island is still a stain on our city and an example of how our prison system targets and leads to the death of low-income communities and communities of color. Rikers should be shut down immediately, ”the political leader of Queens, while urging the municipal and state legislative corporations to advance in law protections for inmates.

“At the state level, we must pass laws like Elder Probation and Fair and Timely Probation and the Clean Slate bill, which would reduce the population in Rikers and in our state’s prisons. At the City level, solitary confinement must be completely abolished and not simply continued under another name, ”added the legislator. “It is the least we can do for the families who are suffering. how the Rodríguez family is suffering because they lost Brandon ”.

The Assemblyman Kenny Burgos He insisted that the most recent fatality on Rikers Island should be the last in a prison that clearly should be closed without delay.

“I am outraged to learn of the recent death of another detainee, Brandon Rodriguez, on Rikers Island. He was only 25 years old and was detained for a week. This is just another long list of human and civil rights abuses that are being committed in this failed facility, ”said Burgos, demanding answers for the inmate’s death and the errors of the criminal and legal system. “As a state representative for Rikers, I’m looking for answers about what caused Mr. Rodríguez’s death and the officers who were in charge at the time. The public deserves to know how detainees are treated, as well as the insecurity at this facility. This most recent tragedy is a judicial error and is exactly why Rikers must close. “

Kenyatta Muzzanni, Lead Organizer of the Prisoners Advocacy Group “Katal Center for Equity, Health, and Justice”, after noting that the death of the Hispanic inmate is “Reprehensible”, and extend his condolences to the family, questioned the City for turning a blind eye to the violation of the rights of inmates in that jail and not ordering its immediate closure, and directly lashed out to the mayor De Blasio and the head of the Municipal Council, Corey Johnson, among others.

“How many deaths will it take before the City takes meaningful action to save lives and quickly shut down Rikers once and for all? Do our city’s Black and Latino communities have to wait before real crisis-level action is taken to address this abomination called Rikers? Do youWhere is the moral outrage and corresponding action from the Mayor, City Council and state leaders? There is no reform to this monstrosity, ”he said. Muzzanni. Rikers must be closed as quickly as possible, before another human being dies unnecessarily here. “

The complaint about the abuses against inmates, and the urgent call for the closure of the prison, comes at a time when health organizations are preparing to present a report this Monday, August 16 on the escalation of violence on Rikers Island, not only in the cells and courtyards, but in the health units of the penitentiary center against workers.

With the support of New York health care unions Doctors Council SEIU, New York State Nurses Association (NYSNA) and 1199 SEIU, prison employees, victims of violent acts, even with prisoners’ weapons in their throats, demand from the City solutions to that crisis and protections to address prison conditions and violence.

“Every day, health workers reporting to work at Rikers face chaos and violence from inmates, who are detained in substandard conditions. At such a critical time for New York City, we must ensure that all frontline healthcare workers who provide care to prisoners are protected, including the courageous nurses, doctors, and medical assistants who have heeded the call to attend. to those incarcerated on Rikers Island, ”prison workers said in a statement. “We are looking for a safe and effective solution for colleagues who face great personal risk for the simple fact of fulfilling their professional duties. They work in fear of losing their life or being attacked and fear for their health and safety every shift ”.

Given the complaints and demands that the prison be closed due to the abuses that have been perpetuated in Rikers, the De Blasio Administration, through the Department of Corrections (DOC), defended the performance they are having and the questions were raised.

“We are striving to ensure the physical and emotional well-being of all the people in our care. and working diligently to close Rikers and create county jails. This will be the first step in helping to create a safer and more humane prison system that has state-of-the-art programming and opportunities for true rehabilitation, ”he said. DOC Commissioner Vincent Schiraldi.

The Department of Corrections said that to reduce the culture of violence, they are working on implementing a plan to divide the homes of the gangs, starting with young adults, they are increasing collaboration with the Bronx District Attorney to re-arrest people in custody who harm staff or other incarcerated persons and concentrate efforts to accelerate criminal cases of incarcerated persons that result in high levels of incidents, assaults and use of force.

On the death of Brandon Rodríguez, The DOC confirmed that the death was reported on August 10 at 12:40 a.m., in the Otis Bantum Correctional Center (OBCC), which was announced last year that it would close on Rikers Island. The agency assures that the officers discovered that Rodríguez was not responding in his cell, administered life-saving measures (CPR) and requested the support of medical personnel who declared him deceased, although it will be the Office of the Chief Medical Examiner of the City that will determine the cause. of death.

“We are working closely with all relevant agencies to investigate the cause and circumstances so that we can better understand how this happened. The family and friends of Mr. Rodríguez have our deepest condolences, this is a terrible and painful tragedyDOC Commissioner Vincent Schiraldi said about the event.

Facts about Rikers Island and its closure plan