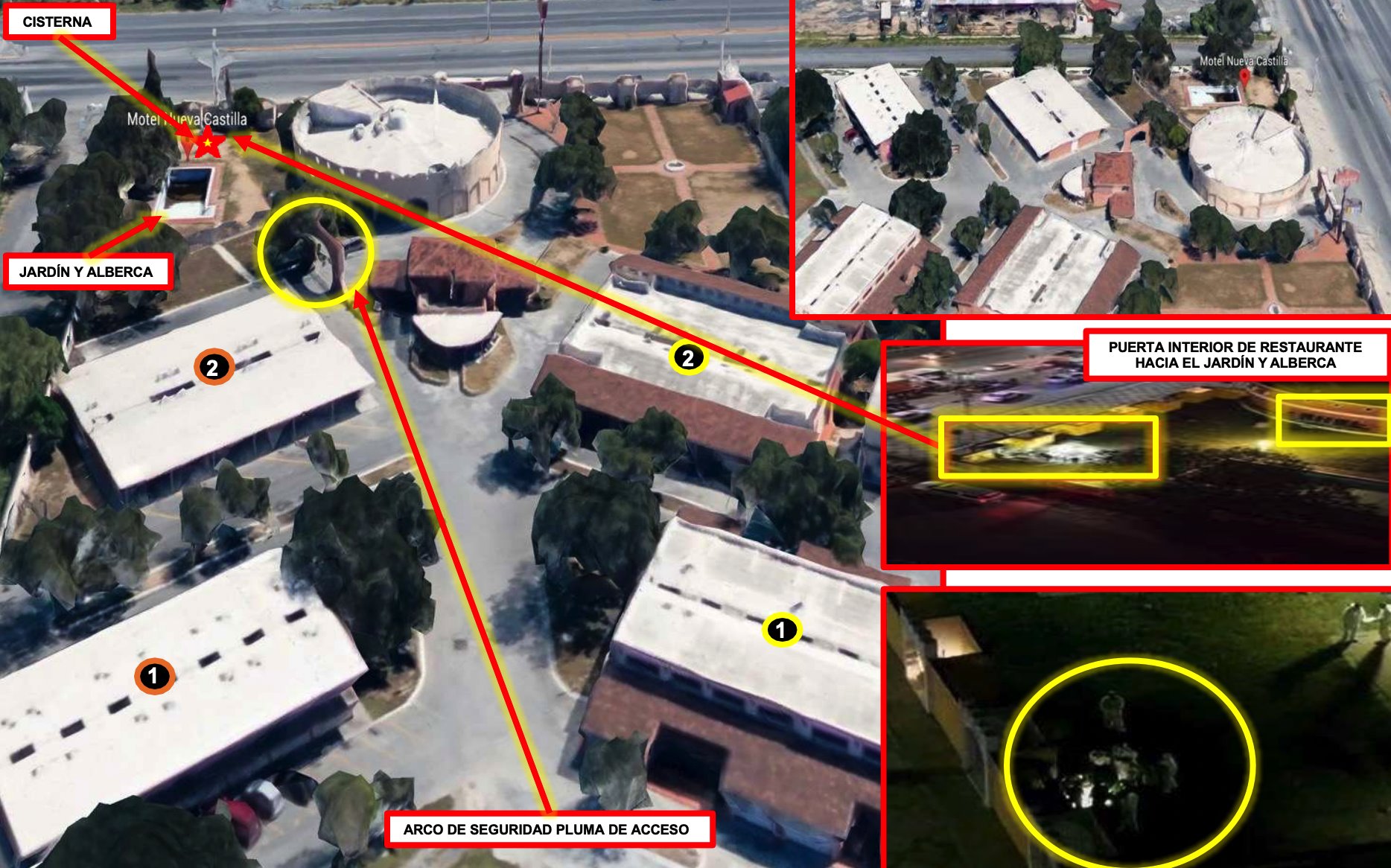 The family of Debanhi Escobar, the 18-year-old girl who has been missing in Mexico for almost two weeks, confirmed that a lifeless body found this Thursday is that of her daughter.

He did so based on the clothes that Debanhi was wearing before he disappeared in Escobedo, in the northern state of Nuevo León, ahead of the results of the tests officially revealing his identity.

“The scientific tests carried out allow us to communicate that the body found is Debanhi Susana, being the cause of death deep skull contusion. We offer our condolences to his family and loved ones,” she expressed.

“It is important to note that, at this time, no line of investigation is ruled out in this case. We will put all the resources in our hands to determine the facts that have happened and, if these indicate a crime, will be prosecuted with the full force of the law“, he added.

However, this confirmation does not clarify various doubts and unknowns that surround andhe casewhich achieved great media coverage and interest from the population that followed the events since the young woman disappeared on the night of April 8 to 9.

There are so many questions that the state governor, Samuel Garciahad already asked the Prosecutor’s Office hours before to release the videos, photos, searches or other evidence on the case.

“We have the right to know what is in that investigation so that the truth comes out,” he said.

Even the president of Mexico, Andres Manuel Lopez Obradoroffered help from the federal government to the authorities of Nuevo León so that this matter can be clarified as soon as possible.

Debanhi’s case shows “irregularities, doubts and questions that the Prosecutor’s Office is not answering,” he tells BBC Mundo Leticia Hidalgofounder of the organization United Forces for Our Disappeared in Nuevo León (Fundenl).

These are some of the questions that the investigation is expected to clarify.

1. Why was the body not found earlier if it was meters from where Debanhi disappeared?

The body located on Thursday was a very short distance from the place where Debanhi disappeared on the Monterrey-Nuevo Laredo highway, commonly known as “highway of terror” for the cases of kidnappings and forced disappearances registered in it.

Specifically, the body was in a water tank in a motel, just 110 meters from a transport company in front of which Debanhi was last seen thanks to security cameras.

This area is where her phone signal was located before contact was lost. For this reason, the search operations focused especially on this area and the hotel facilities were searched up to four times. But they never found the young woman.

It was not until this Thursday that the authorities found his body, and only after the motel staff alerted the police due to the strong smell they perceived in the area.

“This is our greatest pain, they had her here close (…). Why did it take so long? How many times have you been here?” said the girl’s father, indignantly. mario escobar.

“I am devastated inside because they killed my daughter, they killed her (…). I am going to continue with that fight to find the culprits, ”she assured.

The Prosecutor’s Office confirmed this Friday that in the place where the body was found, a previous inspection was carried out in which different institutions and the family itself participated, which “did not allow the now located body to be found”, without offering more details of the reason.

Meanwhile, the Secretary of Security of Nuevo León, Aldo Fasci, He admitted that in the search efforts there was a “massive human error” by the authorities involved, although he assured that his troops had not participated in the search of the motel facilities, reported the Milenio newspaper.

For her part, the founder of Fundenl harshly criticizes “inefficient and ineffective” methods search for the disappeared by the authorities, both in this and in other cases in Nuevo León.

In the Debanhi trial, “it wasn’t even the investigators who found her, but rather the hotel employees who reported it. Everything is wrong, they show a total incapacity even when this case has been so mediatic and they know that what they do is being closely followed, ”she points out.

2. Why did Debanhi’s father suggest that the body could have been placed later and rule out that it was an accident?

After assuring that he felt completely disappointed by the work of the State Prosecutor’s Office, Debanhi’s father asked the media how it was possible that the investigators had not found the body if it was there from the beginning.

“Four times they have searched [la zona]and why does it appear on the fifth? Question: did they plant it? Question: how did it arrive?“He asked this Friday.

“This is not a circus, my daughter is killed by incompetent people (…). Let whoever has to fall fall, ”she criticized sharply.

After knowing the official cause of death released by the authorities, he declared: “Well, they hit him in the head then. What they tell me is a lie. You all know that they killed it or planted it, planted it. Do not tell me now the questioning of what the Prosecutor’s Office said (…). They planted it and killed it, and we have to do justice for all the people who have gone through that and so that it doesn’t happen again.”

louis castellanosspokeswoman for the organization Buscadoras de Nuevo León that participated in the search efforts, also shows her surprise at what happened.

“At different times we were at that fence [el muro perimetral del motel], behind the back of that place, for 30 or 40 minutes. The temperature those days was 35 or 40 ºC, which would have already facilitated the process of decomposition of the body. It is very strange, ”he tells BBC Mundo.

“The number of people on the search was quite large. For almost two weeks they searched there, in the same place, with rescue dogs, and it turns out that Debanhi was not there. And from one day to the next, he is. It is something absurd that leaves us many doubts“, agrees Hidalgo, from Fundenl.

Since the appearance of the body, users of social networks made comparisons and placed as a trend “Paulette”the name of the girl who disappeared in Mexico in 2010 and whose lifeless body was found a few days later after countless searches in her own room, between the mattress and the bed frame.

Other trends that stood out in Mexican networks is “It was not an accident”, promoted by who dismiss the theory that it could have been something fortuitous.

Some of the versions heard in the last hours pointed to the possibility that Debanhi could have accidentally jumped the hotel wall and fallen into the four meter deep cistern.

But the girl’s father assured that, due to the height of the structure, the girl “could not have climbed the fence herself.”

“It’s a lie, it’s totally a lie, and you have to go to the last consequences so that this doesn’t continue to happen,” he answered when asked by journalists if his daughter could have slipped, and before the Prosecutor’s Office reported that the cause of death was a heavy blow to the head.

3. Why did the taxi driver leave Debanhi in the middle of the night and take a picture of her?

One of the parts of this case that raised the most questions from the start was a photo of Debanhi on the night of her disappearance, alone in the middle of the road.

The young woman had attended a party that night with two friends who had gone home earlier. According to Debanhi’s family, her friends called a “trusted contact” who works in taxi apps to pick her up, although the trip was made outside the platform.

When that last photo of Debanhi was released, the family confirmed that the image was real, which was taken by the taxi driver and sent to the girl’s friends.

These were shared with Debanhi’s parents, who immediately denounced them and began the search.

One of the unknowns was to understand why the driver had taken that photo. The girl’s father stated that he would probably have done it to show that she was in good shape when he left her.

But the biggest question about this part was knowing why Debanhi never got home in that taxi and why the driver left her alone on a highway at 4:25 in the morning.

This Friday, her father revealed that the Prosecutor’s Office has videos in his possession where the man is seen trying to touch the young woman’s breasts and blamed him for his daughter ending up alone at night.

“Debanhi complained that she was being sexually harassed and that’s why he got out” of the taxi, said Mario Escobar, who assured that he will seek to initiate criminal proceedings against the man for harassment.

The taxi driver was already questioned and, according to the Prosecutor’s Office, showed his willingness to collaborate at all times. After the famous photo, a security camera recorded Debanhi minutes later in front of a transport company, apparently trying to communicate with someone, although he was unable to speak to anyone.

Some people, including Debanhi’s own father, criticized the fact that the girl’s friends had left her alone at the party that night. The Prosecutor’s Office said that Debanhi boarded the transport alone “due to apparent differences with local people.”

But according to Hidalgo, from Fundenl, “blaming friends is not the right thing to do. We should be able to walk day or night, alone or accompanied, without fear of something happening and no one should have the right to make us disappear“.