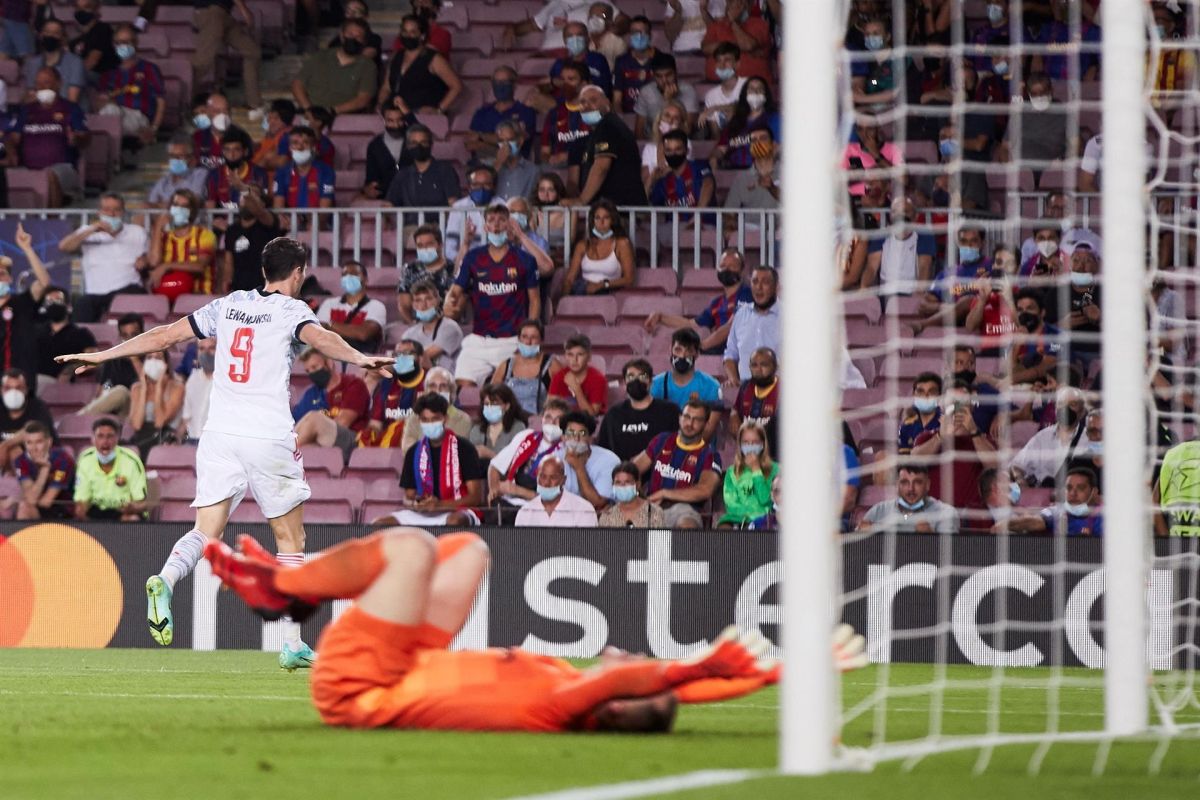 The Barcelona failed to get past her appointment with exposure therapy to the dreaded stimulus at the beginning of the Champions League and lost in the Camp Nou by 0-3 against Bayern Munich, with two goals from Robert Lewandovski and one from Thomas Müller, the night in which 13 months of the anniversary of 2-8 in Lisbon were completed.

Bayern’s physical and tactical might was too much for a Barça team far from being a fearsome rival against the colossi of Europe, but one that put young players on the field of play in the second half who give them hope for the future.

The Camp Nou started the game on fire, singing the Barça anthem a cappella, putting pressure on the rival, going crazy when Memphis went to take corners and singing songs as if, instead of 40,000 spectators, 100,000 souls filled the Barça temple.

During the first 20 minutes Barça gave their fans some reasons for the merriment, playing Bayern face-to-face, lightly pressing the German ball exit, reaching Neuer’s area timidly and keeping Lewandovski, Müller and Sané away from the danger zone.

The very young Jamal Musiala, the replacement for a ‘headdress’ Serge Gnabry, He was one of the few that managed to overwhelm the Barça defense in the early stages, but there was always some help to avoid greater evils.

But reality little by little was imposed and Sané had the first clear chance of the meeting. In the 19th minute, a volley from the German player forced Ter Stegen to show off, who rejected the ball between his left hand and his face, to prevent Bayern from already screaming a goal. Musiala could also have done it eight minutes later, but Piqué hit the ground in time.

The smooth reply came on the next play, when Ronald Araujo sent a header deflected into a Memphis cross from set pieces. The influence of Luuk de Jong, although despondent, was noticed by the constant lateral balls that looked for a reference in attack that many times did not exist.

Fortune, one of the Barça hopes of the night, did not ally with Barça and a shot from the edge of the area by Müller in the 34th minute touched Eric Garcia enough to catch Ter Stegen off-foot and become 0-1. A wave of resignation swept the Camp Nou.

Koeman had rebuilt the losses up front with the 3-5-2 scheme, which incidentally served as an excuse to reinforce the midfield in order to short-circuit the muscle of the German colossus, a chimera. Sergi Roberto and Jordi Alba acted as lanes in an eleven in which Eric Garcia served as third center-back.

The second half began with a serious Barca warning. Sergio Busquets, in an unprecedented way, tried his luck in the 49th minute from the edge of the area and the Bayern defense diverted the attempt enough for the Camp Nou not to celebrate the tie. Instead, what he celebrated two minutes later was a magical stop by Ter Stegen with his right foot shot by Sané.

The azulgrana goalkeeper could do nothing in 56 when Lewandovski, to empty goal and before the passivity of Araujo, put the tip to make the 0-2 taking advantage of the rejection of the stick to a distant shot from Musiala.

It was the demonstration that logic was Bayern’s best weapon, so Koeman bet on being brave and going off script. Very early, in ’59, he gave entry to ‘Gavi’ and Yusuf Demir by Sergio Busquets and a whistled Sergi Roberto, a victim of his low level of play and of being the only captain who has not yet signed the salary cut.

These two additions, together with the return of Coutinho to the pitch after almost nine months, encouraged Koeman’s team, which managed to live on the Bayern pitch for the first time in the match.

Precisely A thread from the Brazilian footballer was the best occasion of the match for the Catalans, that they still had to see Jordi Alba relapse from his muscular discomfort and how Lewandovski made it 0-3 in 85 after getting rid of Piqué inside the area.

Barça did not lose the initial match of the Champions League since the 1997-1998 season, when under Louis Van Gaal they lost 3-2 to Newcastle United. Since then, the Catalans had won 17 wins and 5 draws. The streak ended.