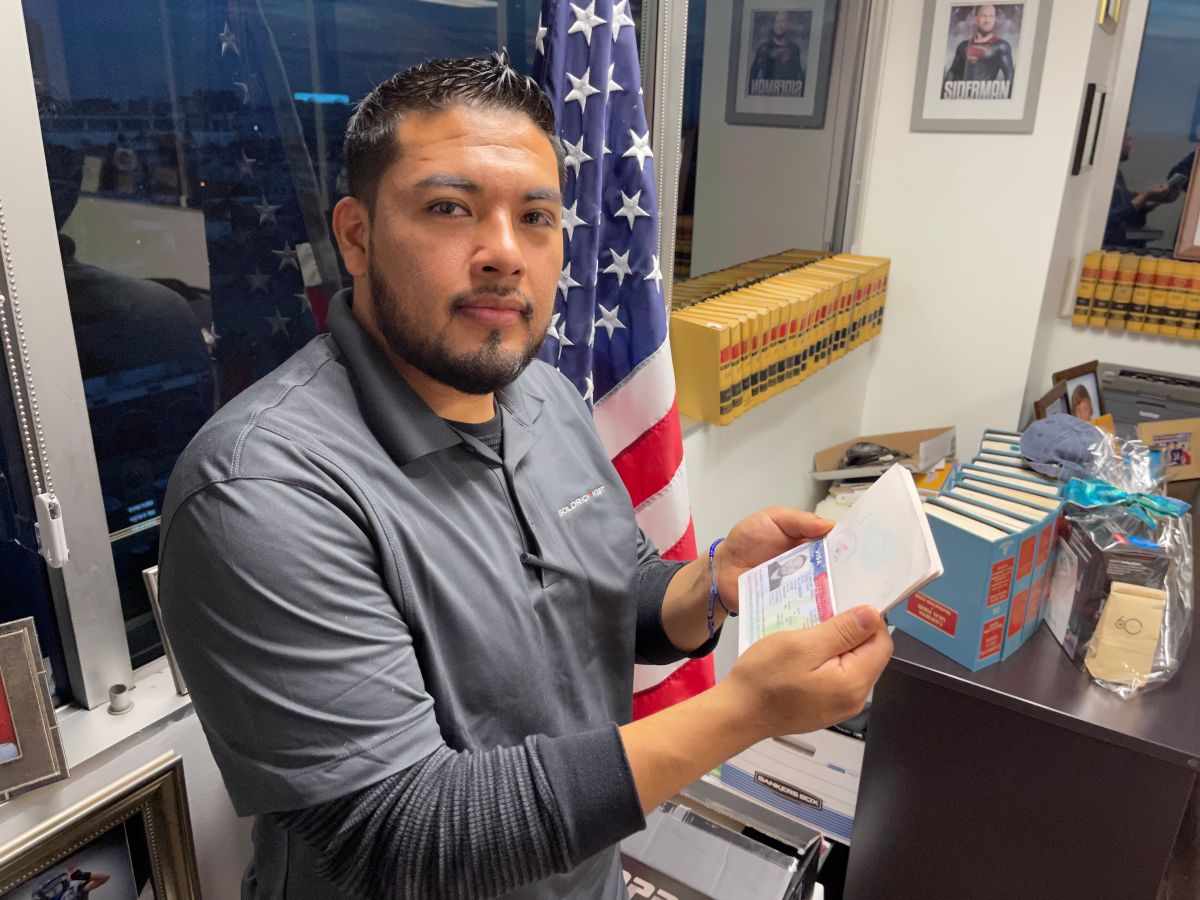 Arturo Bello could not have a better Christmas than 2021, since just a few days ago he received his permanent residence. However, his happiness is not complete because the one who most longed for him to become a resident, his mother, died of covid-19.

“I would have liked so much for her to be alive so that she could see that I finally achieved residency in the United States “, He says.

His mother Guadalupe Mondragón Franco died on January 16, at the age of 54, as a result of covid-19 in a hospital in Los Angeles, without her family being able to say goodbye.

“They just tell you that he’s already died, and you can’t say goodbye.”

It was precisely his mother who brought Arturo to Los Angeles.

“I was born in Acapulco. I reached 11 years old. We came to meet my dad who was already here working. “

Since he was a child, Arturo knew he was undocumented, and when he started working as an electrician at 18, he ran into problems for not having social security.

The Deferred Action for Childhood Arrivals (DACA) program changed his life in 2012 because it removed the specter of deportation and granted him a work permit to be renewed every two years.

“From there, I had more opportunities to seek employment where I could receive benefits. Two years ago I was certified as an electrician, ”he says.

The trip to Ciudad Juárez

A year after obtaining DACA, in 2013 he met his wife, who is born in the United States.

“We got together in 2015 and in 2016 we got married. As his mother had been deported and given a punishment for 10 years, my wife was the one who proposed to help me to obtain residency ”.

It was until the end of 2017 that they began the entire residency process with the immigration lawyer Sergio Siderman.

“For economic reasons, it took us a while to submit the residence application, and everything was delayed by the pandemic.”

An unavoidable requirement to obtain residency is that Arturo had to travel to the US Consulate in Ciudad Juárez to hold an interview with the immigration authorities, prior to having obtained a pardon for entering without documents.

“I had not returned to Mexico since I left at 11 years old. Everything was so different, ”he says.

Last month, he arrived very nervous for his appointment for the residence in Ciudad Juárez.

“You always have the fear that anything could happen and leave your whole life here. In itself, when you do not have papers you always live with the stress that everything will end at any moment“.

He says that lawyer Siderman gave him a lot of confidence, but was honest when he told him that even if everything was fine, there was a 1% probability that he would be denied residency and would not let him return.

Arturo had no criminal record. His life is one of work, dedicated to his wife and two children, a 6-year-old boy and a 3-year-old girl.

“There were like 5 questions that they asked me during the interview, such as in what year had I arrived in the country, where did I arrive from? How many childrens had?”.

When the immigration officer told him that he had approved the interview and would be given residency, Arturo wanted to cry very much.

“There were many mixed emotions, especially great happiness.”

“I still can not believe it. I became a resident 22 years after coming to this country. Now I am 33 years old ”.

He only regrets and is saddened that his mother is no longer there to celebrate together. “She was never able to fix her immigration status; Y it was his illusion to see me as a resident. He always scolded me because I did not rush the procedures, but because of the covid everything stopped. I had an appointment in Ciudad Juárez in August of last year. They rescheduled it until last month ”.

As a US resident, Arturo says he wants to get his license to be a general construction contractor. “Being a resident gives you many advantages, especially having a good job.”

But he also talks about the fact that because he did not have a residence, he was denied a loan to buy a house.

“My dream was to buy my house to take my mother to live with us.”

He also wants to fulfill his wish to return to Acapulco to visit his family. “There I have my older brother, his children, my cousins, my grandparents.”

So her greatest dream is to travel to Mexico to meet her maternal grandparents.

“I want to take my mother’s remains to be buried in a chapel in the town of Guerrero where she was from. In life she always told us that when she died she did not want to be cremated, but with the pandemic we could not fulfill her last wish ”.

Attorney Siderman explains that Bello obtained his permanent residence through his wife, Reyna Verónica, who was born in the United States.

“As a DACA beneficiary, Arturo already had a file with USCIS (Citizenship and Immigration Service) which made the adjustment of status process easier.”

And he points out that he had to go to Ciudad Juárez because his entry into the country was not detected when he was 11 years old. Before leaving, he had to request an advance pardon to be able to attend his appointment at the United States Consulate.

What risks does going to Ciudad Juárez represent?

“The main risk is going without the necessary preparation, information and documents. You have to prepare for your Appointment to deal with the costs of transportation, accommodation, food, important procedures such as medical examinations and a letter of no criminal record in Mexico“.

And he explains that this time of pandemic, the time of the in-person interview is shorter to avoid prolonged contact even with a healthy distance.

He specified that to avoid risks, the immigrant has to appear twice.

“The first time to deliver documents; and the second time for the interview ”.

“If you are approved, you have to wait for your immigrant visa for a few days and then you can return to the United States safely, observing the health protocols.”

“Correct. With a legal entry to the country and with the benefit of DACA, the interview for the immigration adjustment through his wife, would have been in a USCIS office in Los Angeles ”.