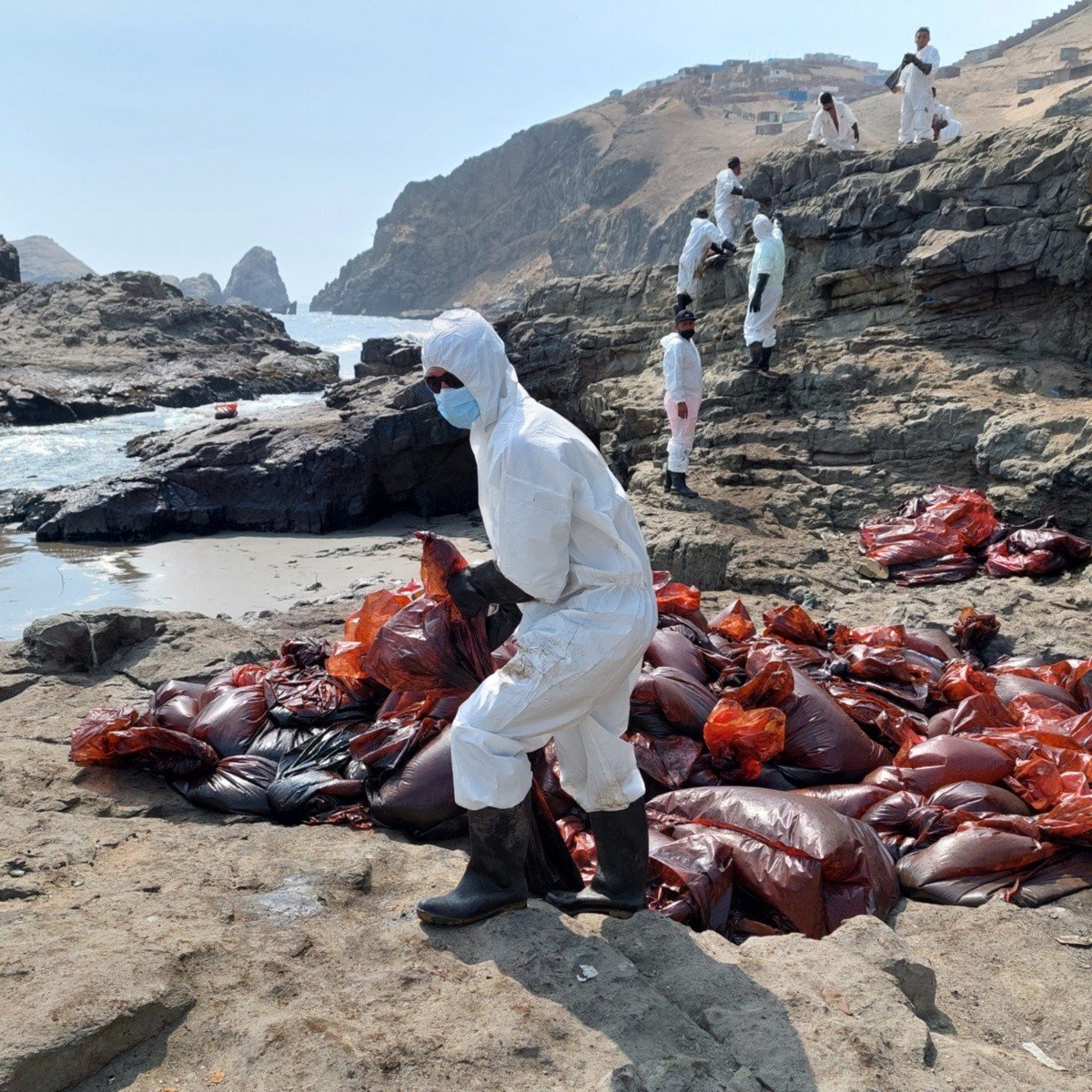 Peru demanded this Wednesday to the Spanish oil company Repsol to answer for the spill of some 6,000 barrels of crude oil in its central coastline, attributed by the company to the waves caused by the volcanic eruption in Tonga.

“The Repsol oil spill in Ventanilla is the worst ecological disaster that has occurred in Lima in recent times., and has caused serious damage to hundreds of fishing families. Repsol must compensate for this damage immediately,” the Foreign Ministry said in a message posted on the social network Twitter.

According to the office, “this terrible situation has endangered the flora and fauna in two protected natural areas” that include the National Reserve of the System of Islands, Islets and Guaneras Points, Islets of Fishermen and the Ancón Reserved Zone.

Peruvian authorities found various marine species covered in oil, many of them dead while others were rescued alive.

The spill occurred on Saturday at the La Pampilla Refinery, located in Ventanilla, a district of the El Callao province, in the region of the Peruvian capital, during the process of unloading the tanker “Mare Dorium” -with an Italian flag and loaded with 985,000 barrels of crude oil – presumably due to the violence of the waves.

Consulted by RPP radio, Repsol’s spokeswoman in Peru, Tine van den Wall Bake Rodríguez, said “we cannot say who is responsible” for the spill, adding that “we are extremely affected” by what they consider “an unfortunate incident”.

Repsol’s representative, in her account of what happened, said that last Saturday they contacted the Peruvian Navy after learning about the explosion of the volcano in Tonga “to see if there was a tsunami alert, (but) they confirm that there was no type of alert for the Peruvian coast, and that we could continue with the unloading of the ship” that had begun on Friday.

The company had initially communicated that a “limited spill” had occurred with an approximate volume of 7 gallons of crude oil (0.16 barrels).

Van den Wall Bake Rodríguez explained that initially no large volume spill was perceived, but “only iridescence in the sea”, and attributed that the almost 6,000 spilled barrels were not initially reported because “the abnormal waves caught the spill under the ship and transported it very far”.

The crude spread over at least 18,000 square meters.

Repsol reiterated this Wednesday in a statement that it is “executing the work of remediation of the coastline and cleaning of beaches after the situation generated by the high tides recorded due to the volcanic eruption in Tonga.”

“Containment barriers have been deployed that cover all the affected areas and brigades with specialized teams by sea and land,” he added.

On Cavero beach, in Ventanilla, dozens of workers with personal protection equipment used shovels to collect crude oil on the coast for the third day, while members of the Navy guard the beaches, AFP found.

Javier Vega, one of the workers, said that “the work is hard, we are working from 6 in the morning to 6 in the afternoon collecting the oil.”

The operation is carried out under the inclement sun of the southern summer, with temperatures exceeding 25 degrees Celsius and with a strong smell of hydrocarbons.

Workers use long sponges, like sausages, to collect the oil from the beach, which shows a dark and viscous tone, impregnated with oil. They then use plastic bags and buckets to store the collected oil.

The Peruvian prosecutor’s office opened an investigation for the alleged crime of environmental pollution against the legal representatives and officials of the refinery. Fines could reach $34.5 million, he warned.

For his part the Power regulator ordered that operations be suspended at the marine terminal where the spill occurred.

Communities of fishermen and residents of the area appeared these days in front of the refinery’s headquarters, demanding actions to stop the environmental contamination that prevents them from carrying out their work, and to demand responsibilities.

The La Pampilla Refinery has a processing capacity of 117,000 barrels per day, more than half of Peru’s total refining volume.

Repsol participates in four natural gas and associated liquids exploration and production blocks in Peru, with an extraction of 46,000 barrels of oil equivalent per day, which represents 12% of the country’s production and 7% of Repsol’s extraction, according to data of the Spanish company.

This includes the Camisea Consortium, whose gas field -the most important in Peru- has 14.3 TCF of reserves, and where Repsol has a 10% stake.