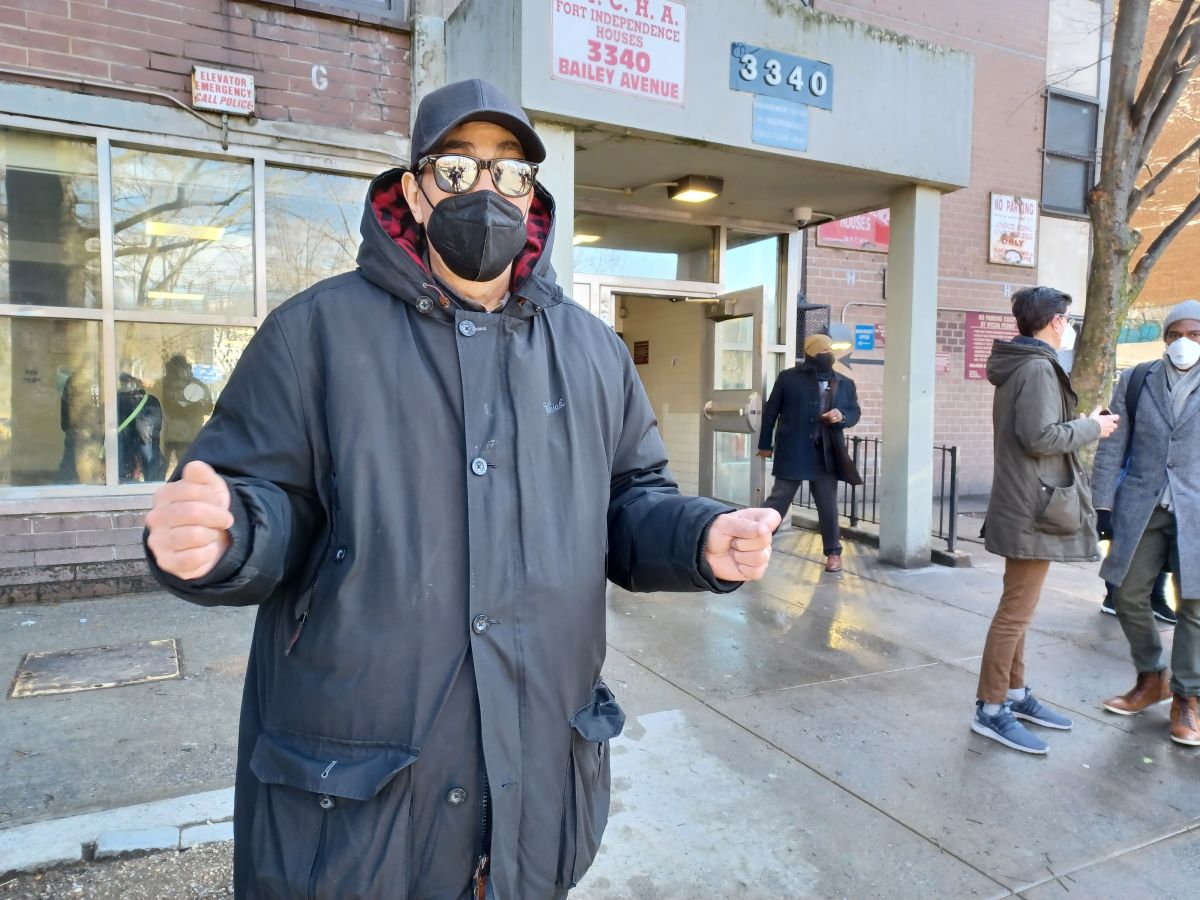 The discomfort and panic of the Cuban Caridad Hernández62 years old, who resides in Fort Independence Housesin the Bronx, a New York City Public Housing Authority (NYCHA) complex is just one voice among more than 350 thousand residents of the Big Apple who live in these residential units across the city, who in times of freezing temperatures, generally have a worse time than usual: During the whole winter we have not had hot water or heating!

And it is that for the second consecutive day, complaints from residents of the largest public housing system in the entire country, forces us to look at service problems accumulated for decades, but that in this winter season, adds the risk that the domestic maneuvers and the use of electrical and gas devices, to procure heat, end in fires like the one registered at the beginning of the year in Tremont, also in the Bronx.

“I confess something to you. Sometimes I have had to turn on the stove and get closer to be able to warm up. Many residents I know are looking for other means. And that is a risk that exposes us to fires every day. It is reported and reported and nothing happens”, said Caridad at the doors of the building where she has lived for eight years, located in the 3340 Bailey Avenue in Kings Bridge Heights.

Charity’s complaint and the 715 families residing at Fort Independence Houses It is not an isolated incident.

This Monday, the residents of Carleton Manor on Beach Channel Drive in Queensanother NYCHA complex, also came out to protest because they have been without hot water since November.

Also last week at Woodside Houses community in Queens It was reported that more than 2,900 residents since the passage of Hurricane Ida, five months ago, have their heating plant damaged.

The same drama has been reported by more than 10,000 residents of Fulton Houses in Manhattan and Lincoln Houses, made up of 14 buildings in Manhattan.

The retired Puerto Rican, Jorge Dávila, 65also lives in Fort Independence House and explained that the deterioration of this residential complex characterized by leaks and elevator failures, takes on greater force these days, when temperatures have dropped significantly in the city.

“There are many elderly people who are sick and They’ve been here all winter freezing. It is reported, the inspectors come, and there is no solution. This is dangerous. People look for ways to warm up. And that’s when the fires come.” the islander recalled.

Faced with pressure from residents like Jorge and his neighbors, this Tuesday the Ombudsman Jumanee William and the President of the County of The Bronx, Melissa Gibson to learn about the series of failures that is actually just “a drop in the ocean” in the NYCHA complexes, where several balances show that the 90% of its buildings in the five boroughs require repairs and renovations.

After visiting the Fort Independence Houses, Williams issued a series of recommendations aimed at reforming the “inadequate and inefficient” repair process at these public housing complexes.

“NYCHA is the worst landlord in town: heat and hot water outages in all five boroughs are unacceptable and completely predictable given NYCHA’s history of mismanagement and chronic underfunding,” Williams said.

Faced with this limitation, the Ombudsman proposed creating a rating system where the most serious cases are prioritized and resolved in a shorter period of time.

In short, he proposed naming a class A letter for non-hazardous reportswith a B the dangerous ones and with C highly dangerous emergencies.

In the opinion of the Dominican Esther Cáceres, who suffers from leaks, lack of heat and crosses his fingers every day that the elevator on his floor works, in this case the Fort Independence House, I would gather the three letters on each floor.

“Here we have almost the entire alphabet. They repair things and days are failing again. I pay the rent on time. I’m not delinquent. But I still live like those who never pay”, Esther reacted.

NYCHA spokespersons told The newspaper that in the specific case of this complex they suffer from structural failures accumulated over the years and that efforts are being made to restore the hot water and heating systems “as soon as possible”.

“It is the replacement of valves and a series of pipes that are damaged that require a major engineering work. We wait resolve it soon, to the best of our ability.” the source said.

For his part, Mayor Eric Adams, who since the first weeks of his administration has had to face several “thousand-headed monsters” such as armed violence and the escalation of the omicron variant of COVID-19, given the endless sequence of complaints in the last few days in public housing units, announced that his team is working to create “NYCHA Stat.”

It is an alert system that marks buildings with most serious problems and prioritizes them so residents don’t have to wait months for a repair.

According to the crossroads of several reports condensed by the Citizen Budget Commission (CBC), almost 90% of NYCHA’s housing units are deteriorated, and the worst thing is that if drastic changes are not made in the next 10 years, they could reach the risk of being affected beyond the point where it is unprofitable and impossible to repair them.

Faced with this calamity described as a humanitarian problem, New York Senator Charles Schumer, leader of the Democratic majority in Congress, who toured some towers of this housing system last fall where the poorest of the city reside, concluded that it “has fallen into such a state of deterioration, that the only solution is through action big, bold and transformative by the federal government”.

President Biden’s $2.2 trillion spending bill, known as Build Back Better, was the hope to have funneled billions of dollars to NYCHA, before stalling in Congress.