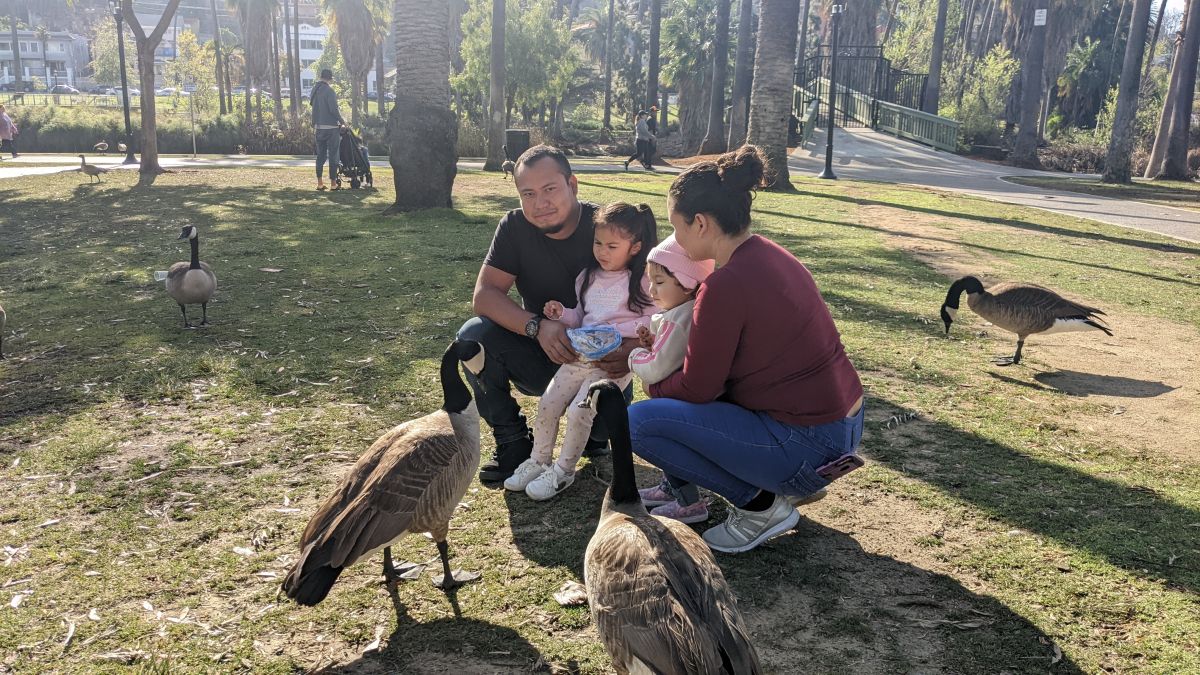 The spring time change this Sunday was not an impediment for many people to get up early and go to Echo Park in Los Angeles to exercise and walk their pets. Others played with the children in the games or in the garden, or simply admired the sunrise while having a coffee while the birds of the place walked around them.

In that calm environment there was also Luis Martínez, who along with his sister Alicia Martínez, tried to teach their girls how to feed the geese.

“I am very happy with how the park turned out,” said Luis, looking around him and acknowledging that the homeless people, who previously had their tents set up there, prevented families from feeling free and safe to visit the place.

For her part, Alicia commented that she really likes how the park looks now and especially because they can walk without worries. So much so that she says it’s worth the trip from Tujunga, the neighborhood where she lives in the San Fernando Valley.

A few steps away, Luis Gutierrez walked with his pet, Alegro, and took photos of the lake. Like the Martinezes, he agreed that the park is now much safer and cleaner.

“Before there were syringes lying around and drugs were common here… It was dangerous even for our animals,” said the visitor, who lives around the area.

For her part, Andrea Marínez, 72, who has lived in Echo Park all her life, said in an interview with La Opinion that she was very happy with the cleanup and removal of the ‘homeless’ that occurred in the park.

“[Antes] there were many people with mental and addiction problems and many Hispanic families stopped going to the park,” he said. He explained that not everyone has a garden at home and that the only rest and distraction was going to the park, but during the pandemic they had to stop doing it due to the homeless who entered the place.

With the change, Marínez says he has now returned and visits the park frequently. “I go with my husband and the dogs, I also meet there with my friends. We even get on the boats that are there and go to the cafeteria that is in the place”.

Meanwhile, a group of vendors who come every weekend to sell their products on Echo Park Avenue, near the park, also said they were very happy with the area’s arrangements.

They further confirmed that the police can now easily be seen taking care of the park and its surroundings and that even inside the park there are rangers.

“Now the homeless can no longer come to sleep during the day or spend the night. Before the park closes, the ranger makes his rounds,” added Isabel Salazar, a plant vendor.

Another point that many people mentioned was the fence that surrounds the recreational space. For example, Luis Martínez said that he would like to see a prettier one because the park is very famous.

However, he indicated that the one that is there for now does not bother him since it helps prevent the homeless from getting in an uncontrolled way from all sides.

Paula Villalba, who sells Mexican handicrafts, accepted that “the park is beautiful but they have fenced it and now it is difficult for people to enter and leave.” She also said that street vendors cannot enter, so now they settle near the four entrances to the place.

While Mrs. Marínez said she was satisfied with the fence. “It seems good to me, in all the big parks in the world there is one to take care of the place.”

The office of Councilman Mitch O’Farrell, representative of the area, explained to La Opinion that during 2020 and at the beginning of 2021 Echo Park had become a dangerous place. Four deaths were reported at the Echo Park lake, including the overdose of an 18-year-old woman and a recovered drowned body found on New Year’s Eve, said Dan Halden, a spokesman for the councilman. Rampant drug use and reports of human trafficking and sexual assault were also reported.

Therefore, the park closed completely in March 2021 for a period of two months to revitalize it and reopened to the community at the end of May of the same year.

As for the homeless, O’Farrell’s office said it had worked with various entities to find homes for almost 200 people who lived in the park. Some were placed in transitional housing, others returned home, including out of state; a group of them did reject the help completely.

Currently you can see around the park a few cars with people living inside them.

Halden noted that since Echo Park Lake reopened, it has been safe for local families, and crime in and around the park has dropped significantly.

“Since the park reopened, there has been less damage, fewer repairs needed in the park, and there has been a decrease in graffiti and gang activity within the park boundaries,” Halden explained.
“There is also less garbage inside the lake.”

Now the park has become a safer place to the point that you can see more family gatherings and community events including the graduation of Logan Street Elementary, which took place last summer.

With information from Mey Lyn Mitteenn