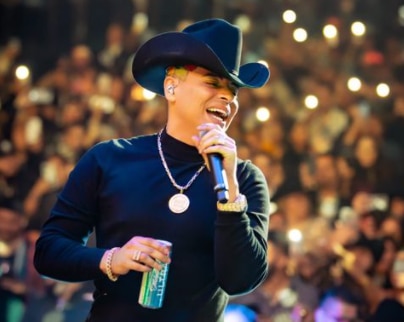 The vocalist of Firm Group, Eduin caz, has become one of the most important artists not only in his musical genre, but in all of Mexico, But since the end of 2021 he has been in constant controversy within his family and health environment.

On January 4, the singer-songwriter from Culiacán, Sinaloa, shared some moments with his partner, Daisy Anahy and her little daughter. Later, through his Instagram account, the Mexican interpreter pointed out that he was in the United States enjoying a family moment in the Six Flags California, when suddenly their stories cheerful they became serious and complaint of discrimination to the security personnel of the multinational amusement park.

“Hey family, Today something very strange happened to me here at Six Flags, I came to Six Flags here in California. My assistant dropped a cell phone, a cell phone of mine. We were going in a game and it fell, we looked for it, we found it and A security told me ‘At 8 I’ll give it to you’. He looked at him, we took pictures of him and everything, I stayed, I had to leave early”, He explained to his more than 5 and a half million followers.

The loss of the device was not the most serious, according to Eduin, if it was not the treatment given by the personnel in charge of protecting the safety of the attendees: “We were all day at Six Flags doing nothing […] But I got here and a gringo attended to me and I know that because I’m Mexican he didn’t give it to me, I swear“Caz stressed about the treatment suffered at the amusement park in California.

Later and to end the subject, the interpreter tagged the amusement park brand in his stories and continued with his public complaint with his followers: “He looked at me, I looked at him and he made me ugly face. So, he did not give it to me and I feel that because he saw me then Mexican. That courage“Said the interpreter of In your bitch life.

However, after the rumors and the concern of his fans, the group to which he belongs released a statement explaining that Eduin Caz went to the hospital to perform a laryngeal stroboscopy, with the objective of visualize your vocal cords, where the doctors found “suggestive data”, for which they gave him treatment.

Later, the interpreter who released the song before closing in 2021 Every Who (2021) together with Maluma, he denied the possibility of having Covid-19: “I’m going to have COVID! … no, I don’t have COVID, lie, that is totally false. My true fans know that the cold kills me because I have asthma, “he said.

To end that controversy, Eduin Caz took with grace the recent scandals in which he has been involved with the hypothetical help of “Mía Colucci”, a character he played Anahi from 2004 to 2006 as part of the hit telenovela Rebel: “I’m realizing that everyone gossips with me. How difficult it is to be me, I would say ´Mía Colucci´ “, he said with a laugh and with the background of And I am a rebel.

Another of the most famous complaints via said social network, was when the Sinaloan interpreter attacked the “Billboard Latin Music Awards” for censoring the moment when he and his group they won the category of Regional Mexican Song of the Year: “Well yes, if we win family, but they did not pass it, that mamad * is thatthat’s why I didn’t go I’m not interested in the awards […]”, said on December 24 in his stories.

“Eduin Caz for a while”: Grupo Firme vocalist reappeared in networks after his hospitalization

Eduin Caz, vocalist of Grupo Firme, alarmed his fans with a photo from the hospital

Eduin Caz admitted infidelity towards his wife: “I solved the problems with my wife, I accepted my guilt”