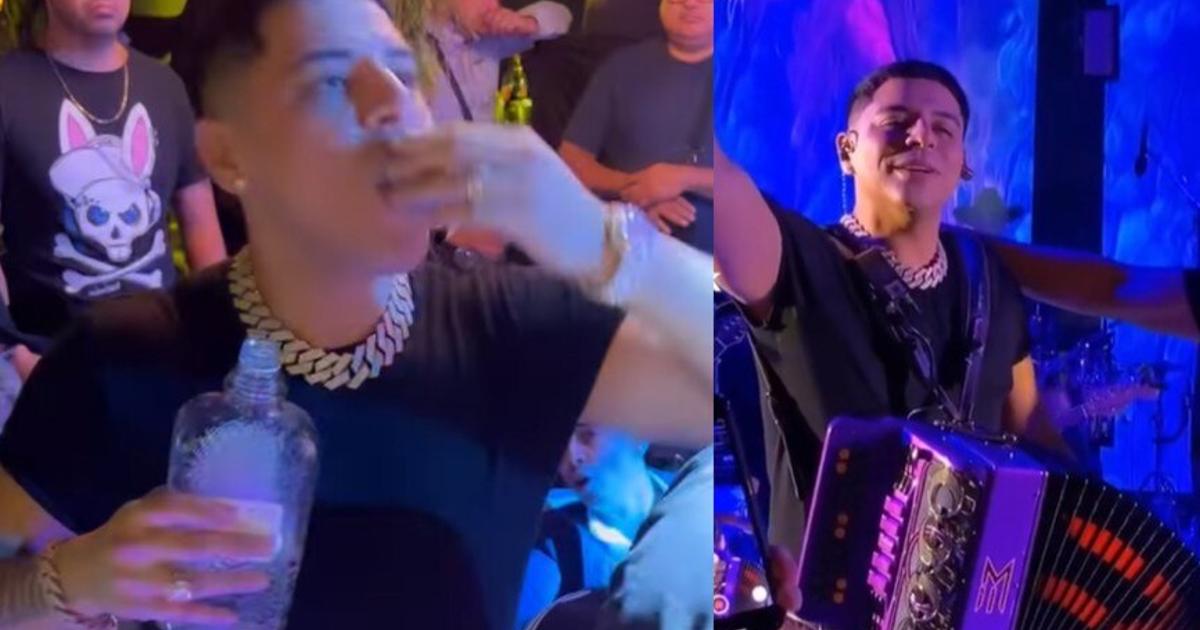 Eduin Caz already proved that he is good at getting drunk, and going to Beto Sierra’s wedding didn’t limit him to just getting drunk with shots and then having a jam session with other singers.

Eduin Caz, 28 years old, was just one of the luxury guests at Beto Sierra’s wedding to Marcela Tlamayo Sarmiento in Los Mochis, Sinaloa.

However, the singer’s marriage didn’t stop the Grupo Firme member from sipping his shots of tequila solo and singing, a little inebriated, to the couple.

From the first moment, Eduin Caz opened the classic “this is our first drink at Beto Sierra’s wedding” as the TikTok trend, everything got out of control.

From having drinks with other guests at Beto Sierra’s wedding, the singer from Sinaloa ended up having a few shots alone.

And this time, Eduin Caz himself uploaded the moment to his Instagram stories, where he said, “this is where it was all worth it.”

The video shows him pouring a shot straight into the top of the tequila bottle, which he immediately drinks and even makes another person next to him drink.

And although here we only see Lefty Sm and MC Davo as spectators. In another part of 26-year-old Beto Sierra’s wedding, he got on stage a little too drunk.

Eduin Caz, with too many glasses, sings to Beto Sierra at his wedding

Eduin Caz confessed that having a few shots of tequila served by himself led him to get out of control, and then he went up to sing for Beto Sierra at his wedding.

The Grupo Firme singer shared little of Beto Sierra’s wedding. However, he was shown by other guests at the wedding and baptism celebration.

Even Eduin Caz has the accordion and the microphone, but at certain moments he prefers to lean on Pancho Barraza not to lose his balance.

Likewise, the singer tries to keep track of the song but is seen joining the chorus of Pancho Barraza’s hit late.

But not only that, but at one point during Beto Sierra’s wedding, the Grupo Firme member preferred to wear the slippers given to the women guests.

“The shoes are already tired of me.”

Finally, Eduin Caz dedicated “El Mundo a Tus Pies” to Beto Sierra and his wife, one of Grupo Firme’s most romantic songs.