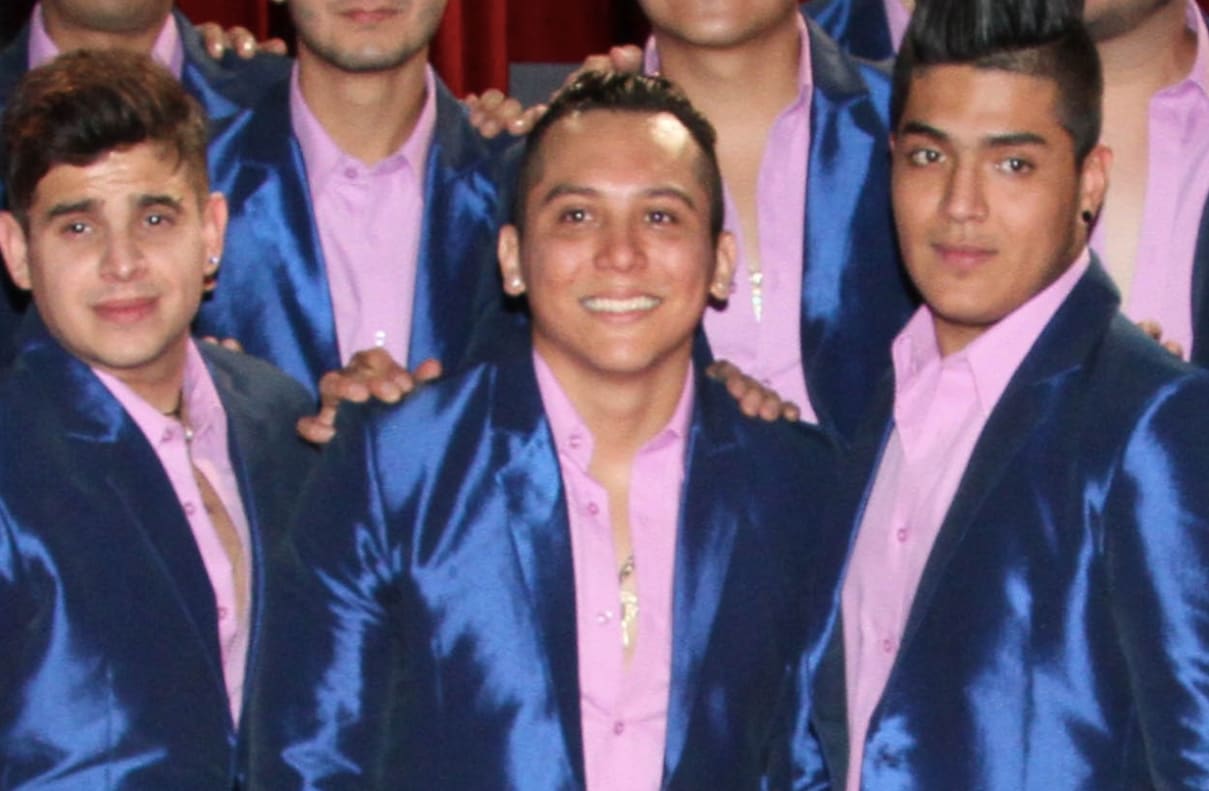 An alleged lover of Edwin Luna, who was also a great friend of Kimberly Flores and with whom her husband allegedly cheated on her, is revealed through social networks, is that why the member of the group La Trakalosa of Monterrey Didn’t he blame the model for his alleged infidelity with the actor Roberto Romano at the Casa de los Famosos?

Go that things do not seem to be very good in the marriage of Kimberly Flores and Edwin Luna, and it is that since the model entered the reality show of the Casa de los Famosos both were placed in the public eye after the Guatemalan was related sentimentally with the actor Roberto Romano, unleashing endless rumors that pointed to an alleged infidelity on the part of Kimberly.

And, is that, in a recent interview that Edwin Luna had with the program Red Hot, Many followers were surprised by the relaxed attitude that the singer of the Trakalosa of Monterrey faced with this situation, arguing that he really trusted his wife and that she would never do anything against their marriage.

This attitude took many viewers by surprise, and even during the interview, since it was incredible the attitude that the singer from Monterrey had before these rumors of infidelity, as a result of this, several followers of the program maintained that Edwin had surely him done a worse thing to her, and that is why he was “tolerating” these kinds of situations, is this theory true?

Weeks after this interview was released and a follower commented on his opinion, the Instagram account of @ chamonic3 brought up a direct message that one of his followers had sent him, which in the words of the girl, Edwin Luna had been unfaithful to Kimberly Flores with her, when they were even married.

In Chamonic’s publication, several photographs of the supposed lover that the Mexican singer had can be seen, and it is not only that, since the woman in question was also a friend of the Guatemalan model, Kimberly Flores, causing that after this betrayal , their friendship will clearly end without any possible arrangement.

Was Edwin Luna’s supposed lover a friend of Kimberly Flores?

According to the direct message that reached Chamonic, the girl comments that the name of Kimberly Flores’s former friend is Isa and that not only that, but also that this woman in question was Edwin Luna’s supposed lover when she was already with the Guatemalan: “She is Isa, the former friend of Kimberly Flores, with whom Edwin cheated on her”, you could read at the bottom of several photographs where Isa supposedly appeared with Kimberly.

After this, the girl who sent the direct message to Chamonic told how the infidelity on the part of Edwin Luna supposedly happened: “They were good friends and on the day of Kim’s baby shower, they say she found them, I don’t know how. but that she took her out of her house that same day ”.

Edwin Luna’s supposed lover appears. Is that why he forgave Kimberly Flores?

After these statements, he commented that after seeing them “together” the Guatemalan took her former friend out of her house and it was from there that endless problems began to unleash between Edwin Luna and Kimberly Flores, all from the fact that The model found a supposed lover for the singer: “From there they had problems and Kim stopped talking to the girl and they stopped following in networks.”

This was where the follower of Chamonic commented that that is why it was very likely that Edwin Luna tolerated the rumors that there were about Kimberly Flores with another man and that is why he kept calm about the situation: “All this was according to why he cheated on her with her several times, that is why now that she entered a program, and in that program she makes a kiss with another, that is why he did not say anything because he knows that he would not be ashamed to complain ”.

“Now it turns out that she is the saint”; Edwin Luna’s supposed lover appears. Is that why he forgave Kimberly Flores?

Faced with these strong statements, various followers of Chamonic began to arrive, where the comments were divided, many arguing that they wanted to see Kimberly as “holy”: “Now it turns out that the Kimberly saint and victim ajaaaaa”, “Now it turns out, with such not to look bad they even invent that, rather I think he is from a closet ”.

“She talked about it at the house she was in, although she didn’t give a lot of detail but she talked about something like that”, “Oh, if he was angry, hurt, disappointed, he wouldn’t go around advertising the woman’s single, that’s a marketing plan. Everything is already more than said, done and prepared! ” in the Chamonic post. Could it be that all this is true and did Edwin Luna really have a lover when he was already with Kimberly Flores?

After seeing how he was unfaithful, Edwin Luna went to get Kimberly Flores out of the House of the Famous

On September 10, yesterday, the departure of Kimberly Flores, Edwin Luna’s wife, from The House of the Famous , the program where she was becoming one of the most controversial figures because of how ‘affectionate’ she was behaving with another of the participants and it was even mentioned that she was even unfaithful to her husband. Filed Under: Edwin Luna’s alleged lover appears. Is that why he forgave Kimberly Flores?

The situation got out of control when it was reported that Edwin Luna had gone to visit his wife Kimberly Flores in the vicinity of the program. The reactions were immediate, when it was reported that the woman would leave the reality show and the characters that remain inside the house, have not hesitated to express their opinion about the reason for her departure, involving Roberto Romano.

The announcement of his farewell

During the broadcast, we could see all the members gathered in the main hall of The House of the Famous It was there when the departure of the Guatemalan woman was announced. Some were extremely surprised at the end of the controversy, plus Roberto Romano who covered his face with both hands and could not believe what they were mentioning.

“I want to notify you that due to a personal situation, Kimberly has left The House of the Famous . I want to clarify that it is nothing that has no solution, they are situations that she needs to resolve. I will give you more information later, thank you very much and good evening. “, Was heard in the recording that gave the information about the departure of Flores. Filed Under: Edwin Luna’s alleged lover appears. Is that why he forgave Kimberly Flores?

Edwin Luna came to the show

The personal situation? It seems that everything started because Edwin Luna found himself quite upset with Kimberly Flores. It was for this reason that the member of The Trakalosa of Monterrey to go to the place where the reality show is being filmed and express to the producers that they urgently need to speak with his wife. Filed Under: Edwin Luna’s alleged lover appears. Is that why he forgave Kimberly Flores?

They were off the air for more than half an hour

On Instagram, the Escandalo account reported that since the arrival of Edwin Luna, the program’s cameras were suspended for more than 25 minutes and that everything was part of what was happening with the Luna-Flores marriage. The official talk has not been released and users report that it will be until this Monday that it will be mentioned whether or not there is a divorce, while other people have said that it is all about a ‘theater’ because Kimberly premiered a song.

“So the cameras 25min ago of @lacasadelosfamosostv after knowing that Edwin is there to talk with Kim and according to 24/7.”, He mentioned the account of Escandalo, assuming that the producers have put the cameras without signal or only in a position to prevent them from finding out that it was the marriage talk. Filed Under: Edwin Luna’s alleged lover appears. Is that why he forgave Kimberly Flores?

The rumors among the colleagues of the reality show, began to say the ‘why’ Kimberly left the program and one of the most affected by the departure and the comments of his companions, was Roberto Romano. The actor began to complain to Cris, one of the members, saying that they should not specify a situation for having seen her speak with the former Miss Universe, Alicia Machado.

“(…) I say it and I maintain it, we are not 15 years old and when you suppose or speculate, you speak the opposite things. And if you keep your assumptions in your head, well… You have to speak up front. Romano commented on the broadcast. “I heard that Cris told Alicia ‘We all know why it was’”, to which the young woman corrected, telling her that things have not been like that. “The only thing I said was ‘how good that he left, so that they fix things,'” said the woman. Filed Under: Edwin Luna’s alleged lover appears. Is that why he forgave Kimberly Flores?