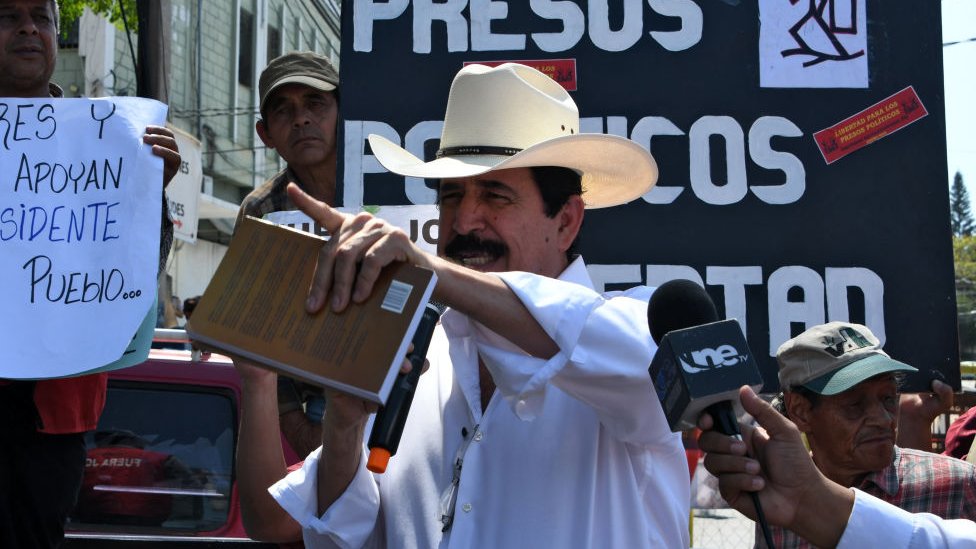 The presidential candidate Xiomara Castro, of the left-wing Libertad y Refundación (Libre) party, surpassed her main opponent, the mayor of Tegucigalpa, Nasry Asfura, of the ruling National Party (PN), in the presidential elections of Honduras on Sunday night. .

According to the counts published by the National Electoral Council (CNE), with more than 50% of the records scrutinized, the wife of former President Manuel Zelaya had obtained more than 53% of the votes, while Asfura took little more 33%.

If the victory is confirmed, the arrival of Castro to the presidency would put an end to three consecutive terms in power of the National Party.

Of the total votes counted in a preliminary way, the Libre candidate had a difference of more than 340,000 ballots compared to the ruling party candidate.

According to the official, the country reported a “historic” level of participation with more than 68%of the 5.1 million enabled by the suffrage.

In a distant third place is Benjamin Rosenthal, of the Liberal Party, with 9.24% of the votes

The authorities highlighted that the elections were held without “incidents to regret”, although civil rights organizations pointed out the lack of electoral material, flaws in the voting system and other minor problems.

If the trend is confirmed, a Castro victory would not only become the first woman to rule the countryIt would also end 12 years of conservative rule and return the Honduran left to power for the first time since Zelaya was deposed in a coup in 2009.

Images broadcast on local television showed Castro sympathizers celebrating the first results, although both the PN and Libre had proclaimed themselves winners even before the preliminary counts were known.

“We are going to form a government of reconciliation, peace and justice. We are going to start a process to guarantee a participatory democracy, a direct democracy, ”Castro, 62, said in a message to his followers after learning about his advantage.

Thank you people! We turned 12 years of tears and pain into joy. The sacrifice of our martyrs was not in vain. We will initiate an era of prosperity of solidarity through dialogue with all sectors, without discrimination and without sectarianism. 🇭🇳 ❤️

“I will call for a dialogue starting tomorrow with all sectors of Honduran society so that we can use points of agreement and, for this, form the minimum bases for a next government,” added who was first lady between 2006 and 2009.

The candidate, dressed in red and black, ended her speech with the phrase “Ever onward to victory“, One of the most used by the Cuban revolution.

Meanwhile, local press reports indicate that supporters of the PN left the outskirts of the campaign headquarters after learning the preliminary results.

Castro’s project proposes a “Refounding the country”, with a government program that seeks to reform several laws from the previous mandate and to convene a Constituent Assembly to modify the Magna Carta.

Born in September 1959, Castro’s name began to sound nationally along with that of her husband, who came to government initially presenting himself as a center-right candidate of the Liberal Party (PLH) and then took a further turn. toward the left.

This Sunday’s elections, the eleventh since the return of democratic order in 1980, are held in a difficult moment for the Central American nation, shaken by the coronavirus pandemic, waves of migrants and various natural disasters.

But also for various political scandals.

The PN, of the outgoing president Juan Orlando Hernández, has been at the center of several complaints of drug trafficking and corruption, something that the president denies.

In fact, Hernández’s brother was sentenced to life imprisonment this year in the US for drug trafficking and the outgoing president himself runs the risk of being extradited and put on trial in the United States after leaving office for the same reason.

In addition to the president, Hondurans were summoned to elect 3 vice presidents, 298 municipal mayors, 128 deputies to the local Parliament and 20 to the Central American.

In accordance with Honduran electoral law, the candidate who obtains the simple majority of votes, without possibility of ballot or second round.

The only president who has repeated in office after the return of democracy has been Hernández, who returned to the polls in 2017 after a controversial Supreme Court decision that enabled him to compete for a second term.

The presidential term in Honduras is four years without the possibility of reelection and the president takes office on January 27 of next year.