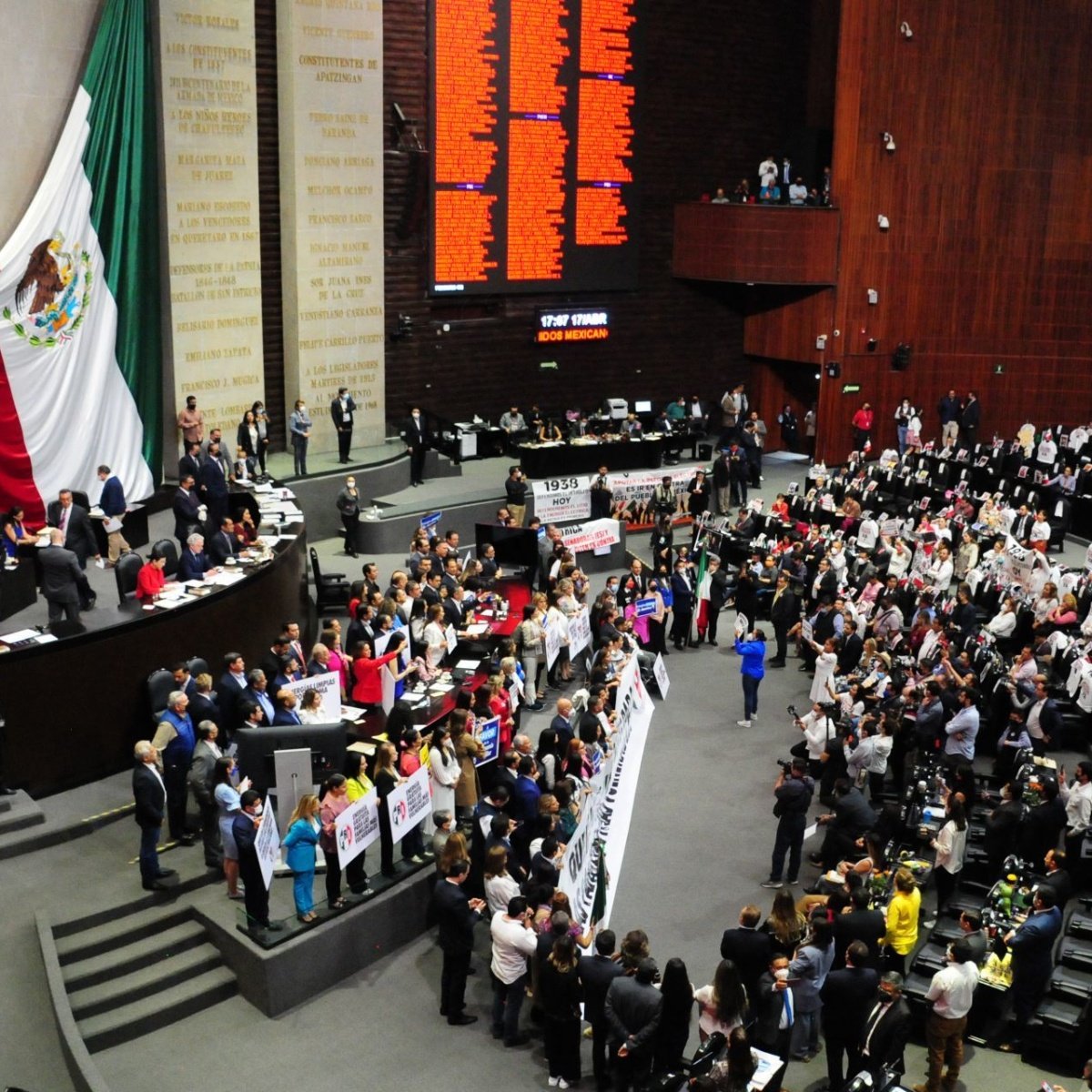 After several months of discussion and accusations between the president Andres Manuel Lopez Obrador and the opposition legislators, it was time to debate the Electrical Reform in San Lazaro.

From the early hours of Sunday, the atmosphere of defeat was felt between Morena and her allies, the PVEM and the PT, who did not have two thirds of the votes needed to endorse her.

There were 498 legislators in the session hall. The Citizen Movement bloc was the first to arrive, followed by PRI, PAN and PRD, thus concretizing the total assistance of opposition legislators, willing to reject the initiative.

The session began 50 minutes later than scheduled and first a protest was taken from the alternate legislators of some deputies who had requested leave. A 30-minute break was then ordered, but it would not be the only break.

When returning to session, the Morenista legislator Andrea Chávez confronted the PAN member Margarita Zavala and asked her to excuse herself from voting due to an alleged conflict of interest, since her husband, former President Felipe Calderón, collaborated with the Iberdrola company.

The case had to be analyzed and a recess was called that lasted more than an hour. In the end, the request did not proceed.

With a reform in agony, the moment of positioning arrived and it was Jorge Herrera, Alejandro Moreno and Luis Cházaro, parliamentary leaders of the PAN, PRI and PRD, respectively, who stressed that the reform would not pass.

The highest point of the discussion would come when the PRI told the Morena legislators that they were “morally defeated”, a situation that provoked the anger of the ruling legislators.

Sunday’s session lasted more than 12 hours and legislators from all parties participated, who maintained the signs and slogans of “it will not happen”, on the one hand, and “traitors to the country”, on the other.

With the session still in force in San Lázaro and knowing that the result of the vote would not favor the Electricity Reform, President López Obrador announced that he had sent an initiative to reform the Mining Law with which he will seek to shield lithium from private interests.

The deputies discussed the Electrical Reform initiative whose objective was to modify articles 25, 27 and 28 of the Mexican Constitution. It was rejected with 223 votes from the opposition, 275 from the Morena bloc. I needed 332, because 2 deputies were missing.

The session was attended by 498 deputies from the Morena, PAN, PRI, PVEM, MC, PT and PRD parties.

The session took place in the Chamber of Deputies in Mexico City.

Key Points of the Reformation

Luis Espinoza Cházaro, parliamentary coordinator of the Party of the Democratic Revolution (PRD)).

“Rebel, revolt, vote against!” It was the call that he made to the deputies of Morena, announcing that the entire vote of the opposition bloc would be against the Electricity Reform.

“Who are digging your political grave are you, on this day, at this moment, you are handing us the presidency of the republic again in 2024,” he assured after reiterating that his votes would be in favor of the Reform and accused opponents of being traitors. .

“We failed, we were wrong to give SENER the opportunity,” he said, assuring that they were “deceived with Peña Nieto’s Energy Reform and that now they would support the reform proposed by AMLO.

“Many were betting that the Va x Mexico coalition was going to dissolve, because today we tell them that we are more united than ever,” he said, insisting that the PAN members would vote against the Energy Reform.

“A planned and orderly transition to clean energy will be guaranteed with the participation of the private, public and social sectors and sovereignty will be preserved,” he commented, reiterating the support of Morena’s legislators for President Andrés Manuel López Obrador.

It only happens in Mexico

The Chamber of Deputies advanced with the debate on the Electricity Reform without Laura Fernández, today the candidate of the PRD and the PAN for the Governorship of Quintana Roo. Her substitute could not take her place because she was already a deputy. Santy Montemayor was appointed by the TEPJF on the Green Party’s multi-member list.

The Sonoran deputy of the Labor Party belonging to district 2, Ana Laura Bernal Camarena, was the only one who did not attend the session without any justification. The former model was simply absent and her absence was evidenced on the voting board in the session room.

The PRI legislator, Norma Angélica Aceves García, attended the session in San Lázaro in a wheelchair and with oxygen. The member of the Human Rights Commissions attended in these conditions since in previous days she faced pneumonia.

The MC bench protested against the initiative with anti-gas masks, considering that it is “toxic” for the country. He stated that if approved, 129 percent more coal will be burned and carbon dioxide emissions will increase by up to 65 percent, which opposes the fight against the climate crisis.

Marco Antonio Flores Sánchez, deputy for Morena and singer, did not attend because he had another commitment: to offer a concert in the US with his “Banda Jerez”. He requested permission to separate for the period from April 15 to 19, so at the beginning of the session his substitute, Jeu Ramón Márquez, made a protest.

Andrea Chávez asked Margarita Zavala to excuse herself from voting, accusing her of a conflict of interest, since her husband, former president Felipe Cálderon, collaborated with a subsidiary of Iberdrola. “My husband has never worked at Iberdrola and my spouse’s activities are not decisive for my activities.”

Legislator Andrés Pintos decided to leave the PVEM minutes before starting the discussion. As the Green is allied with Morena and the PT, the deputy set out his clear position of rejecting the initiative and joined the Citizen Movement to vote against it. Days ago, the PRI Carlos Aysa joined Morena.

Timeline of the Electrical Reform session.

9:00 The first deputies arrive – the Citizen Movement bench are the first

9:15 Legislators from the PAN, PRD and PRI enter the venue

9:30 Buses arrive with protesters in support of the Electricity Reform

9:40 Legislators from Morena, PT and Verde arrive at the venue.

10:00 Coparmex, Concamin and Canacintra set positions against the Reform on their social networks.

10:30 All the opposition legislators are present in the San Lázaro precinct, with the absence of Morena, Verde and PT.

10:45 The session does not start and the congress channel broadcasts a special Covid-19 program instead.

10:50 With 50 minutes of delay, the session begins between shouts and slogans.

12:00 Substitute opposition legislators are sworn in.

12:20 During the recess Gerardo Ferández Noroña, Sergio Gutiérrez Luna and Mier leave the premises to speak with protesters.

12:30 The session resumes and it is confirmed that Marco Antonio Flores, deputy for Morena, is absent from the session to give a concert with his band “Jerez” in the United States.

12:40 Before the start of the discussion, Andrea Chávez, deputy for Morena, asks that Margarita Zavala excuse herself from voting due to an alleged conflict of interest.

12:55 PAN deputy from Yucatan, José Elías Lixa asks to continue with the order and advance to the discussion of the Reform.

12:45 They decree a new recess and it is confirmed that there are 498 deputies in plenary with the only absences being Ana Laura Bernal from the PT and Laura Fernández from the PRD.

1:30 Sergio Gutiérrez Luna meets with PRI deputies in the Political Board prior to the discussion of the Electricity Reform.

1: 55 PRI deputies accuse Morena of prolonging the session of the Reform

3:05 Resumes the session of the Electricity Reform

3:30 Luis Chazaro, leader of the PRD takes the floor and sets the position of the opposition, they will vote against the reform.

3:57 Jorge Álvarez Máynez, MC deputy, sets the position of his caucus against the Reform.

5:20 Jorge Romero Herrera, fixes the position of the PAN.

6:15 End of the first round of interventions.

6:20 Start second round of positioning.

11:17 Second round ends and voting begins.