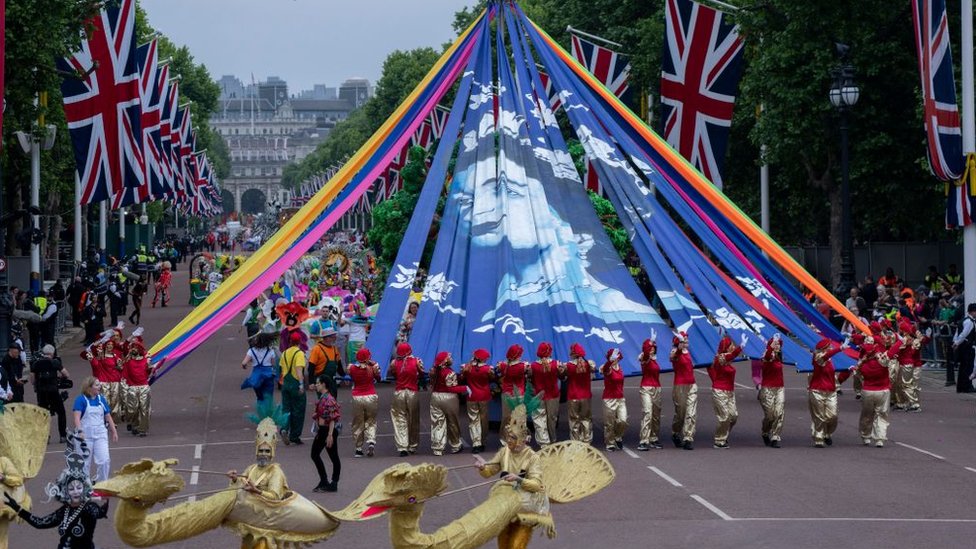 There were four intense days of celebration and reflection in the United Kingdom to celebrate the seven decades of Queen Elizabeth II on the throne.

The Platinum Jubilee activities were varied: a military parade, a special Thanksgiving service at St. Paul’s Cathedral in London, and a pop music concert at Buckingham Palace. The celebration ended on Sunday with a parade and a carnival in the British capital, while there were street parties across the country.

In a letter of thanks after a closing parade in London, Queen Elizabeth said she was “honored and deeply moved” for the celebrations and assured that she remains committed to serving as monarch with the support of her family.

“My heart has been with all of you,” he said.

BBC Mundo brings you some of the most memorable royal moments from the long jubilee weekend.

The celebration began on Thursday June 2, under dazzling sunshine, with the traditional Trooping the Color military parade, in honor of the Queen’s official birthday, which drew huge crowds to Trafalgar Square and London’s famous The Mall.

Although the crowd was delighted to see the 96-year-old monarch on the balcony of Buckingham Palace, her 4-year-old great-grandson Louis, son of the Duke and Duchess of Cambridge, was the real star of the show.

As British Air Force planes and helicopters roared past in a special flyby, he covered his ears and seemed to let out a scream. Waving to the crowd and making funny faces, the young royal amused the crowd and cemented his place as the center of attention.

But the young prince still managed to delight the crowd with his daring faces.

2. The queen lights a beacon

On Thursday night, Queen Elizabeth switched on a chain of lights from Windsor Castle to Buckingham Palace, as thousands of headlamps were lit across the UK and Commonwealth of Nations countries.

The main lighthouse, the Tree of Trees sculpture, representing the million trees planted in the Jubilee year, illuminated the palace gardens.

Others were lit at historic sites, the four highest peaks in the UK and in the 54 capitals of the Commonwealth of Nations. Historically, lighthouse trails were used for long-distance communication, but today they represent solidarity between places.

3. The Duke and Duchess of Sussex reappear

Prince Harry and Meghan Markle, Duchess of Sussex, had not been seen together at a royal event since they left the UK for the US two years ago.

They were briefly seen in the window of a building overlooking the military parade on Thursday, but made their official appearance when they arrived hand in hand at St Paul’s Cathedral to attend a special service honoring the queen.

The royal couple brought their two children with them to London and they are said to have stayed in a cottage on the Windsor Castle estate. It will be the queen’s first chance to meet her great-granddaughter Lilibet, who celebrated her first birthday on Saturday.

The monarch did not attend the thanksgiving service after experiencing an “upset” during the previous day’s parade. She also canceled her visit to the Epsom Derby on Saturday.

4. The queen shares tea with the nation’s favorite bear

The 96-year-old monarch made a surprise appearance in a short, secretly pre-recorded video as 22,000 fans enjoyed a concert outside Buckingham Palace on Saturday night.

In the parody, the queen enjoys an afternoon with Paddington Bear, a famous children’s television character, with whom she drinks tea with a soft cream that goes out of control, while the bear drinks directly from the teapot and splashes cream on her face. of a butler.

In the scene, Paddington tells the queen that he always carries a stash of his favorite treat: a jam sandwich. Smiling, she replies “me too,” before pulling her own sandwich out of her bag.

In a poignant moment, the bear looked the monarch in the eye and said, “Happy jubilee ma’am. And thanks. For all”.

Later in the concert, Prince Charles paid a personal tribute to his mother and thanked her on behalf of the world.

Standing next to his wife, the Duchess of Cornwall, he began: “Your Majesty, Mommy,” drawing cheers from the crowd.

“You laugh and cry with us and, most importantly, you have been there for us for these 70 years,” he said.

The star-studded event featured performances by the band Queen, Duran Duran and Diana Ross, and averaged over 11 million UK viewers.

6. The queen appears on the balcony for the end of Jubilee

After a spectacular parade through central London, with military personnel, celebrities and thousands of volunteers, the Royal Standard was raised over Buckingham Palace, signifying that the queen was there. Shortly after, she appeared on the balcony.

Concerns about the queen’s health cast doubt on whether she would be there. In the end, she was a brief appearance, she smiled and waved before going back inside, but she was enthusiastically received by the thousands in attendance.