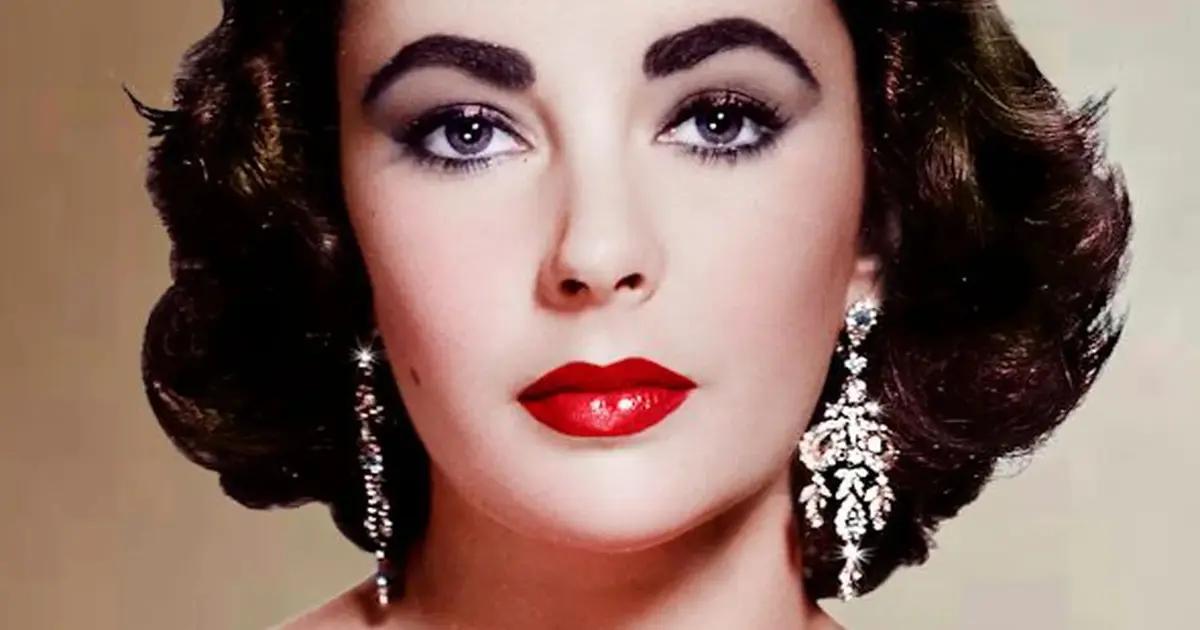 On March 23, 2011, one of the last great movie stars, Elizabeth Taylor, died at Cedars-Sinai Hospital in Los Angeles. She was 79 years old. After seven decades in the world of cinema and more than 50 films behind her, Taylor was not only the star of unforgettable productions such as Cleopatra or Suddenly, Last Summer, but she was also a woman who attracted everyone’s attention because of her private life: she had seven husbands and eight marriages. In addition, she was addicted to alcohol and drugs.

In the first authorized biography of the artist, Elizabeth Taylor: The Grit & Glamour of an Icon, which has just been released in the United States, journalist Kate Andersen Brower offers unpublished facts about this woman who dazzled on the big screen.

With the family’s approval to explore the actress’s archives and personal material (including 7,358 letters and notes) and interviews with 250 of Taylor’s closest loved ones and other acquaintances, the author sought to document the legendary star’s life by talking to the people who knew her best off the set.

Demi Moore, Carol Burnett, and Colin Farrell were among the personalities who agreed to give their testimony for the book. The actress’s four children, some of Liz’s former loves, such as George Hamilton and Robert Wagner, and her last husband, Senator John Warner, who passed away in May 2021, also allowed the journalist to dig into Taylor’s past.

With statements from those close to her and Taylor’s files, the writer could tell the story of an actress who struggled with addiction, was abused, or was an advocate for AIDS sufferers in the 1980s.

“She said her whole life had been a struggle,” Brower explains. “Her resilience was refusing to be a victim. Once her father beat her up, he hit her. He was intimidated because his 12-year-old daughter made more money as a child star than he did,” the writer details.

“They reconciled when she was 20, but the fact is that she wouldn’t let herself be victimized. But she picked herself up again, like when she almost died in her 20s because she had pneumonia, and she went on and on and on. It was about never giving up,” he adds in his book.

“To be able to go through her life, read her inner thoughts and find out how she was psychologically working through things that were happening to her all the time. And also how empathetic she was with other people, how she struggled with being a working mother of four and struggled with love…. I think there was a lot more to her than we could see,” Brower told People magazine in an interview.

The book also reveals a flirtation with director David Lynch at the Oscars after-party in 1987, where they shared a kiss: “I leaned in slowly, as I approached her lips, but mesmerized by these violet eyes,” the director recalled. “I watched those eyes close as we kissed, then mine close. We went into a dream. I’ll never forget it.”

Her addictions are another major revelation in the biography. Taylor opened up in numerous letters to various people about her struggle to overcome her drug addiction. One of her sons, Chris Wilding, is the fruit of her marriage to English actor Michael Wilding, who had spoken of some of the most dramatic episodes during the 1970s when his mother was plunged into a medication called Demerol, which was administered intravenously. “Her son told of Elizabeth’s completely blank stare as she handed him a syringe for him to administer the dose,” the journalist explains in the People interview. “There was always a void that she was trying to fill.”

“Elizabeth would say her whole life was like a fight,” Brower reveals.

She also refers to abuse from her partners; one of the most violent was during her marriage to actor Eddie Fisher, her fourth husband, who held a gun to her temple. “Don’t worry, you’re too beautiful to kill yourself,” he told her. Elizabeth recounted that marrying him was “like a slow suicide,” Brower explains, “so she needed to leave. She got out of these abusive situations throughout her life, but I think the thing about her is that she always thought she was better off when she was married.”

According to the journalist, the actress’s children have thanked her for her work. However, they have recognized that they have found episodes difficult to digest, “but they have also learned things about their mother by reading it because her life encompassed so much that no one was there to see it all.”

A fascinating love story over the phone

Although he does not like to talk about his loves and conquests, Farrell told about his platonic relationship with the legendary actress in the last days of her life.

The story – told by the actor – went like this. At the end of 2009, when he was at Cedars Sinai Hospital in Los Angeles because he had fathered Henry, his second son, he found out that the legendary actress was hospitalized for a heart problem. He did not hesitate and sent her a bouquet. He was convinced that the diva did not know him. But he was wrong. Liz returned the attention with another bouquet and a note in her handwriting. That’s how it all began.

After a brief encounter, the actor spoke to Taylor’s agent to request a private tour of the star’s home. “Elizabeth was intrigued,” Brewer writes. “His Irish accent and reputation as a maverick reminded her of her beloved Richard Burton.”

Their first meeting was at Taylor’s Bel Air mansion, where Farrell brought a copy of Yeats’s poetry as a gift. “He told her that if she ever wanted him to come back and read poetry to her, he would be happy to oblige,” according to the biographer. Later, Taylor wrote to the actor, “What a pleasure it was to meet you…You remind me of so many good things…so many happy things. Thank you for being so real.”

“He went, again and again, to read to her,” Brewer recounts. “He would sit in an armchair next to her bed, and she would occasionally play recordings of Richard reading poetry.”

A decade later, in 2013, Farell revealed some details of this relationship during an interview. “That was the beginning of a year and a half or two of a very special relationship,” the performer confessed during his time on the Ellen DeGeneres show in 2018.

“She was a spectacular woman. It was, at least in my head, my last romantic relationship. Although it was never consummated,” expressed the actor, who explained that the two had long phone chats until well into the wee hours of the morning.

“We talked about everything. Poetry, food, travel… Not so much about movies. To the despair of my friends, I never asked her about James Dean or Montgomery Clift. She didn’t sleep much at night, like me, so I’d call her at two in the morning. I’d sit in my garden, and we’d chat for hours,” recounted the Irish actor, who was 34 at the time.

“I loved her, still love her, and I was lucky enough to be her friend for the last two years of her life. It was a beautiful friendship that fell into my lap,” the actor indicated about the iconic Hollywood star. “I wanted to be husband number eight, but we ran out of time.”