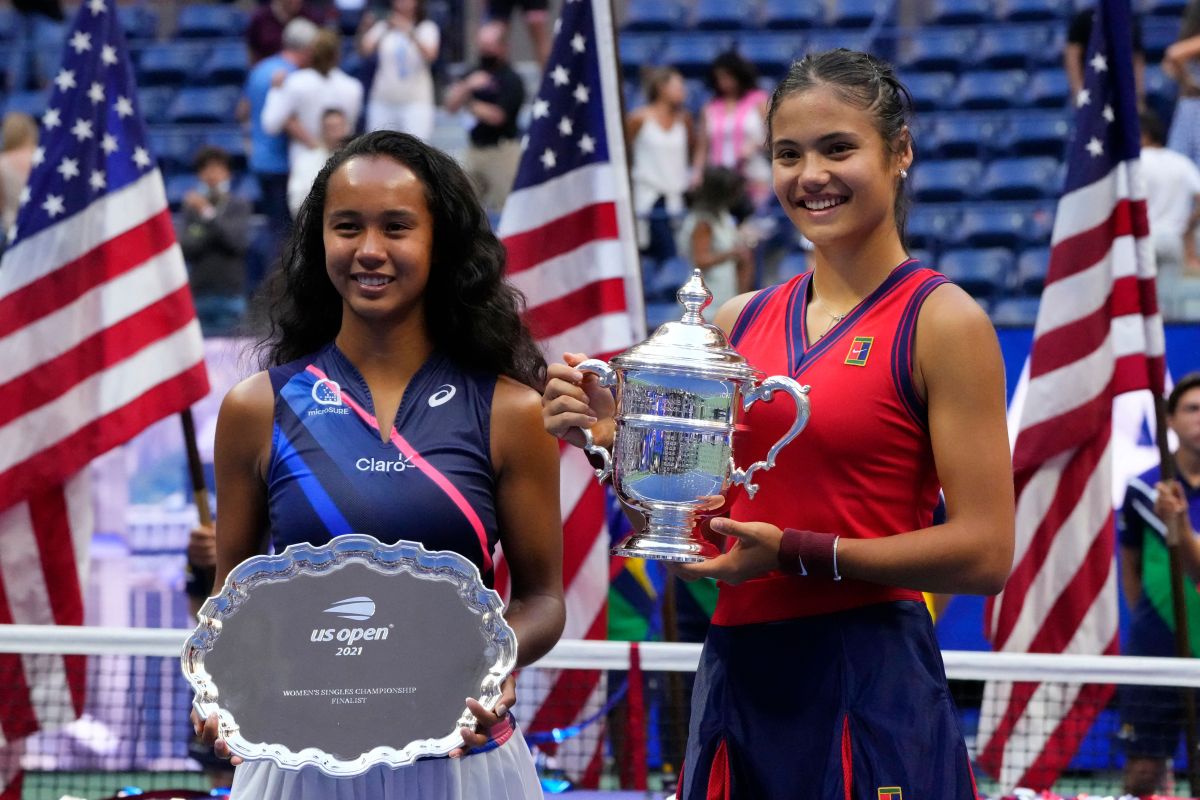 QUEENS, NY – From the center of the court Leylah Fernández delivered a powerful cross right hand that seemed a winner when Emma Raducanu, lightning-fast legs, lunged to her right to reach the impossible ball and return it parallel, beating a surprised Fernández. The English daughter of Romanian and Chinese turned to her team to shout the break that put her 4-2 in the second set, launched to victory in one of the most surprising US Open in memory.

After winning the US Open final 6-4 and 6-3 in 1 hour and 51 minutes, Emma Raducanu, English, 18 years old, is the first person – man or woman – to win a Grand Slam tournament coming from the stage. previous.

She is also the first woman to win a “big” in her second participation. And the youngest winner since Maria Sharapova at Wimbledon 2004.

A sports superstar is born. Emma Raducanu wins the #USOpen coming from the previous phase and without giving up a set in 10 games. Never seen. 18 years and the future of tennis ahead. @EmmaRaducanu pic.twitter.com/C2IwXKPlji

Leylah Fernández could not repeat the miracle

Raducanu had in front of another adolescent, the Canadian Leylah Fernández, 19 years old and number 73 in the world (she leaves New York as number 27), who had just won two tournament champions (Naomi Osaka and Angelique Kerber, against the who came back after giving up the first set) and three Top 5 players to reach the final. She thus became the youngest tennis player to beat more than one Top-5 in a “big” since Serena Williams when she won in 1999.

In the last two weeks, Fernández became the favorite of the public in New York, which she thanked in her speech during the trophy ceremony, in which she received an endless standing ovation from the Arthur Ashe Stadium.

“I love them. New York, I hope to see you next year, ”said Fernández, who recalled the significance of the match date, September 11, just 20 years after the attack on the United States, when none of the finalists had been born yet.

“In a day as difficult as today for New York and for everyone in the United States, I hope we can all be as resilient as New York has been in these years,” said Fernández.

Raducanu started her speech as a winner by praising Fernández’s play during the tournament and noting that she beat established players: “I hope we play against each other in many more tournaments and finals.”

Two teenagers on the largest tennis court in the world

It was the first Grand Slam final in which no contender was seeded. The nerves took their toll in the first moments and both committed double faults in their first service games.

Leylah Fernandez defended five break balls on his first serve, but succumbed on the sixth. Immediately afterwards he returned the break to Raducanu, who committed another double fault. Afterwards each one was able to send with their serve until 5-4, when Fernández, after showing his resistance capacity defending three break balls, ended up giving in to Raducanu’s punch, who both with the backhand and the right printed more force to his flat strokes.

With this parallel right Emma Raducanu takes the first set of the final of the #usopen. He has yet to lose a set in the entire tournament, including three qualifying matches. @EmmaRaducanu pic.twitter.com/kKD82LAtuV

The second set experienced dramatic moments. After defending a 0-40 on serve, Fernandez broke Raducanu’s serve in the next game to go 2-1. But the Englishwoman responded immediately with another “break”. It was the beginning of the end for Fernández, who gave up his service again in the next turn and saw how this time, unlike his matches against Osaka and Kerber, his rival did not leave him with comeback options.

At 5-2, Fernández raised two match balls on serve, hurting with his parallel right. And he still had two break balls for 5-4, but Raducanu, with a strange medical time in the middle of the game that Fernández protested even calling the tournament director, managed to close the match and his historic victory at the US Open.

In the middle of a game where he can win the tournament, @EmmaRaducanu has asked the doctor. Looks like he’s injured his leg. @leylahfernandez waiting. # USOpen2021 pic.twitter.com/cfn46VvAvH

Raducanu becomes the second Briton to win in New York, after Virginia Wade in 1968.

Fernández and Raducanu had never met as professionals, but in the second round of the juniors at Wimbledon 2018, at the age of 15, the Englishwoman had beaten the Canadian 6-2, 6-4. Today saw the first clash as professionals between two young people who are destined to star in women’s tennis in the next decade.