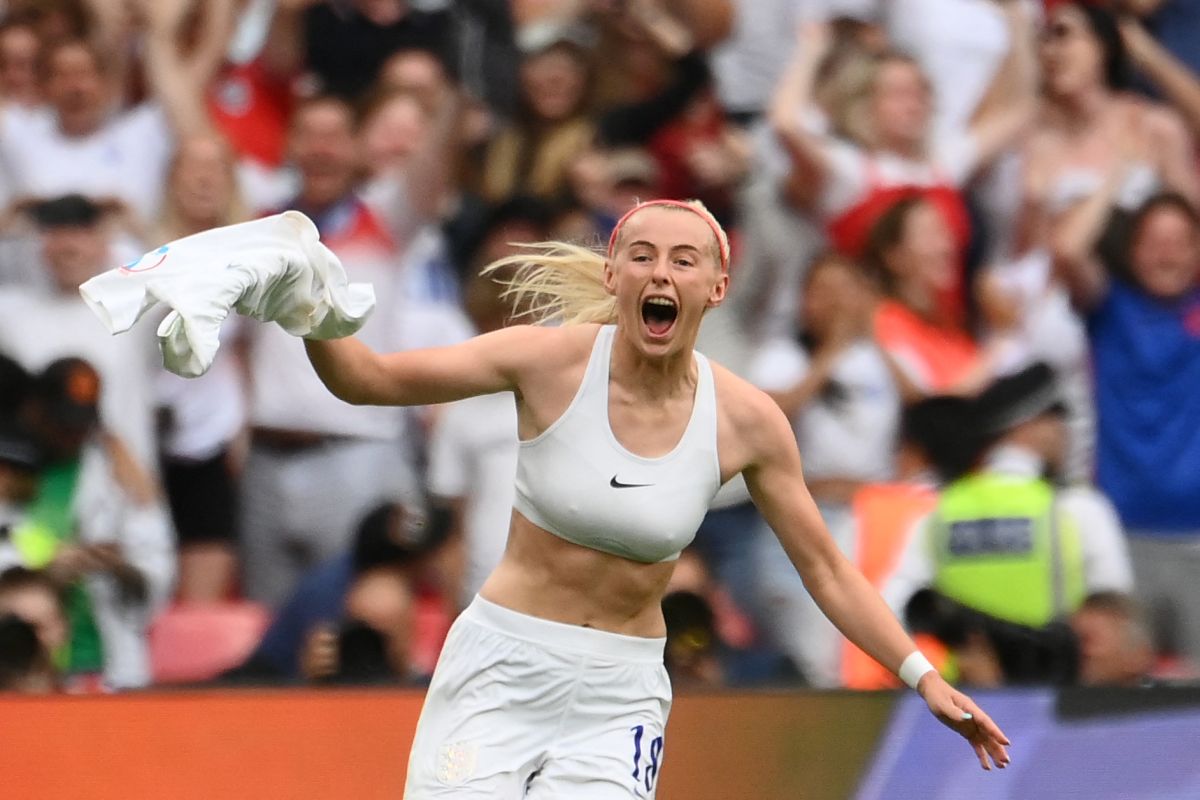 England defeated Germany 2-1 on Sunday in a historic Women’s Euro Cup final, which was played at London’s iconic Wembley Stadium.

Germany, a powerhouse in women’s football, was on its ninth European Championship and had always claimed superiority over England in the past.

England, meanwhile, aspired to the first continental trophy and came to this match as favourites, having displayed great dominance in the preliminary matches with 15 goals and only one against.

The match did not start very well for Germany, with their star striker Alexandra Popp relegated to the bench with an obvious injury. But the Germans launched an aggressive game from the beginning, with a physical game, well answered by the English who were booked four times with a yellow card.

Both teams vied for dominance and the first half ended 0-0.

The English opened the scoring in the 62nd minute with a goal from Ella Toone, but the Germans equalized in the 79th minute thanks to Lina Magull.

That caused an extension, and at 110′ Chloe Kelly scored the second goal for England, which gave them the championship.

The tournament in general was of transcendental significance, not only because it defined the continental hierarchy among the European teams, but also gave a great boost to women’s football so that it reaches the level of prominence that men’s has.

For the Golden Boot

The match not only decided the European champion country. Also in dispute was Golden Bootwith two rivals aspiring to that trophy.

Eyes were on England striker Beth Mead and veteran German striker Alexandra Popp, who each scored six goals in their five games so far.

Popp, in addition, was emerging as the second soccer player (male or female), after the Frenchman Michel Platini in 1984, in score in every game of the European championship.

Mead was looking to equal the record of seven goals for England in a single European Championship set by Alan Shearer in 1996.

The German Popp, who had been injured for several months and it was considered a miracle that she had even entered the court, had to stay on the bench.

Mead was substituted in the 61st minute, but she won the trophy anyway, as she was ahead of Popp in assists, the way the tie for number of goals is broken.

A milestone for the technical directors of the respective teams was also at stake.

The one from England, the Dutch Sarina Wiegman -who won the trophy with the Netherlands team in 2017-, had the possibility of being the first female coach to win the European championship with two different nations. He finally made it.

Her German counterpart, Martina Voss-Tecklenburg, aspired to be the second woman, after her compatriot Silvia Neid, in win the competition as player and coach.

Definitely, the 2022 Women’s Euro Cup was a great success for Englandboth on the field and off.

The “Leonas” team captivated the country with its fearless style of play, drawing record numbers of stadium attendees, delighting fans in a carnival atmosphere and receiving unprecedented media coverage for women’s sports.

As well as making national team members famous, women’s football could be catapulted to much higher levels, both in England and elsewhere.

The big question that connoisseurs are asking is what impact the success of this tournament will have on the advancement of women’s sports.

What did the fans who for the first time closely followed the Women’s Euro Cup think?

“I was never interested in women’s soccer before, but now i’m an addict. It’s a breath of fresh air.YoIntense, resilient and sincere, great players with excellent skills” – Larry Dickens, from Shropshire, England.

“I’d say half of my soccer-loving friends are suddenly talking about the women’s game. Even the names of the players are known!“– Tim Williamson, Arsenal fan.

“For me it was just good quality football and a safe and friendly environment” – Barry Critchely, bus driver

“The best night of my life! I loved my first experience, an incredible atmosphere… now I’m deciding which (women’s) club to follow” – Helen, from Sheffield.

“I love that now I know mention the names of the women’s teams. It feels like a real game changer in role models that I hope will inspire my daughters.” – Mark Reid of Derby

“Inspirational moments in sport can be an incredible catalyst for change. But it is only achieved if they are backed by a strategy to support girls and women” – Baz Moffat, from London.

Women’s soccer has already enjoyed a dramatic rise in popularity for a few years, but this particular tournament broke attendance records, with television, radio and internet coverage drawing millions.

The final filled Wembley Stadium’s 87,192-seat capacity, the largest attendance for a European Championship final – women’s or men’s – in history.

In 1964, the men’s final between Spain and the then Soviet Union at the Bernabéu stadium had a box office of 79,115. The 2020 men’s final at Wembley between England and Italy was restricted by the covid pandemic and then reached 67,173 spectators.

Before the final, the total attendance of 487,683 had already surpassed the record for a women’s European championship, which was 240,055.

The figure was already predicted when the opening match at Manchester’s Old Trafford stadium recorded an unprecedented attendance for an individual match in the Women’s Eurocup of 68,871 people.

“This will inspire a lot of people. If there is no legacy left after this (…) then what are we doing?” asked former Arsenal star Ian Wright before the game.

The English Football Association’s director for the women’s game, Sue Campbell, had an answer: “The legacy really starts before the tournament. I think most people think of it as something that happens after a tournament, but we’ve been working on some really good legacy projects.”

You can also read: “I would rather see him crying on my shoulder than go to his funeral”: the call of a UFC fighter after the suicide of his friend [Video]