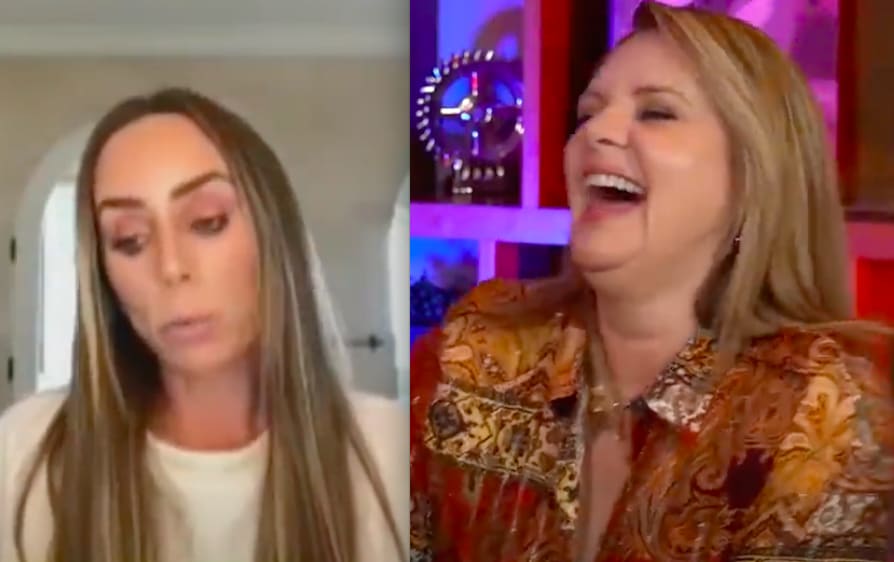 The twists and turns of life. The Mexican actress, Érika Buenfil reacts to the problems that Inés Gómez Mont has before the courts and sends a forceful message, remembering the time when the host confessed exclusively for Tv Azteca who the father of the actress’s son was, something that “she they had no right to disclose ”.

Go that things have gotten quite complicated for the host of shows Inés Gómez Mont, and is that the Mexican is currently accused of money laundering and belonging to organized crime together with her husband, Víctor Manuel Álvarez Puga, a fact that It has brought him endless trouble and arrest warrants.

“I have never received that money”: Inés Gómez Mont

It was last September 9 when it was announced that a judge had granted an arrest warrant to the driver Inés Gómez Mont and her husband Víctor Manuel Álvarez Puga, after being accused of organized crime and the crime of operations with resources of illicit origin, This was reported by the Foro TV portal at that time.

After this, the only one who has come out to show her face has been the same driver, who claims that she is innocent, and that those facts are “completely false”: “To be clear, I have never stolen a peso. Nor have I received money, much less have I seen or had 3 billion pesos in my life (…) And much less under any circumstances do I belong to organized crime ”.

And it is that despite the fact that many celebrities have given their support to the host, one of the actresses who did not remain silent was Érika Buenfil, who did not hesitate to bring up a problem she had with Inés Gómez Mont in the past, when she revealed , without the consent of the protagonist, the name of the father of her son Nicolás.

Through the Instagram account of @ chamonic3, it is possible to see the reaction that Érika had to the problems faced by the host of shows before the courts, where she implied that life took many turns and that now she “had to be above”.

Through the account of @ chamonic3, which managed to recover this comment, it is possible to see how Érika Buenfil argued that Inés Gómez Mont revealed one of her biggest secrets without having consideration for her or her son, commenting that the only objective that had the driver at first was to hurt him:

In the publication, the actress of Mexican novels wrote the following: “My son belongs to Ernesto, but she? She is on the run. He thought he was hurting me, he just walked forward without the right to speak. Wherever she goes ”, Erika Buenfil reacted to the problems that Inés and her husband are currently facing in court.

Remember the problem you had with the driver; Erika Buenfil reacts to Inés Gómez Mont’s problems and sends a message

As mentioned a few lines ago, it was in 2008 when the show host, Inés Gómez Mont, revealed exclusively for the Ventaneando program that the father of the child that Érika Buenfil was expecting, Nicolás, was the son of the former president of Mexico, Ernesto Zedillo Jr., something that shocked not only the public but also the Mexican actress, because she had not planned to reveal that news: “The son of Erika Buenfil, Nicolás, belongs to Mr. Ernesto Zedillo Jr.”

Given this, the @ chamonic3 account comments that this information was told by Ernesto Zedillo Jr.’s wife to Inés, who was her friend at the time: “Inés justified herself by saying that it was a favor that her friend Ernesto and his wife Rebeca, ‘whom I consider to be my sister, and they did it through me so that she could make herself known in the best possible way. VIDEO HERE

After this, various followers of the @ chamonic3 account began to comment that ‘karma was divine “, and that now it was up to Érika Buenfil to enjoy how time put things in their place:” No way, sooner or later it pays for everything, whether good or bad ”,“ Time takes care of putting everything in its place ”.

“Yesterday Ines enjoyed it, now Érika enjoys it, it’s that simple. The wheel turns for everyone ”,“ Now it would be nice if Érika got the exclusive of where she is ”,“ La Gómez Mont gave the news with enormous joy. She forgot that pregnant women are very vulnerable and Érika Buenfil putting up with her mocking comments ”,“ Remember that life is a roulette wheel and it turns for everyone, at that moment Inés enjoyed airing that news, now it’s her turn. Good for Érika ”.

The television host, Inés Gómez Mont, assured that the accusations against her and against her husband Víctor Manuel Álvarez Puga for allegedly having received 3 billion pesos for two public contracts are totally false, since she has never had that sum of money , according to information published by the El Universal news agency and its Instagram page.

“Without any justification they place me on the same level as a drug trafficker or terrorist,” says Gómez Mont. Through a statement published on her Instagram account, the driver indicated that under no circumstances does she belong to organized crime. Filed Under: Sweet Revenge? Erika Buenfil reacts to Inés Gómez Mont’s problems and sends a message

Likewise, that he has kept silent to focus on his defense, in addition to claiming to be innocent by not having committed a crime. “I know who I am. For myself and my children, I will demonstrate my innocence with dignity and I will not keep silent. I repeat: I am innocent and this is an injustice ”.

In the case of diversion of public resources and money “laundering” for which the driver and her husband, Víctor Manuel Álvarez Puga, are wanted, a judge issued 10 more orders requested by the Attorney General’s Office (FGR) and now she remains a fugitive from justice. Filed Under: Sweet Revenge? Erika Buenfil reacts to Inés Gómez Mont’s problems and sends a message

In addition, the arrest warrants for Víctor Manuel Álvarez Puga include Eduardo Guerrero Durán, former commissioner of the Decentralized Administrative Body for Prevention and Social Readaptation (OADPRS); Paulo Uribe Arriaga, former Director General of Administration; and Emmanuel Castillo, former head of the General Coordination of Federal Centers of that body.

The Attorney General’s Office pointed out that 2,950 million pesos were diverted to billing companies supposedly linked to Álvarez Puga and that this money came from two contracts with the Decentralized Administrative Body for Prevention and Social Readaptation. Filed Under: Sweet Revenge? Erika Buenfil reacts to Inés Gómez Mont’s problems and sends a message

The contracts were awarded for the purchase of the OADPRS Command, Control, Computing, Coordination, Alert and Intelligence Center System for various federal prisons and the other for the acquisition of the interconnection of three other federal centers for social rehabilitation. Of the former officials that the FGR seeks to arrest in this case, Paulo Uribe already has a summons for a hearing for another case, which will be held on October 18. Filed Under: Sweet Revenge? Erika Buenfil reacts to Inés Gómez Mont’s problems and sends a message

In this diligence, the FGR will seek to impute the premium payment of 62 billion pesos for the granting of multi-year contracts, during the administration of Genaro García Luna in the Ministry of Public Security, to companies such as ICA, Arendal, Prodemex, GIA, Homex and Tradeco for the construction of a privatized prison with capacity for 20 thousand inmates.

The driver’s full statement reads as follows: ”I have been silent for a few days to try to understand the facts attributed to me and to focus on my defense. Despite not having access to the file, I want to emphasize that I am innocent and have not committed any crime ”.

“Indeed, according to the press, the authorities accuse me of allegedly having received money from two public contracts (totaling 3 billion pesos) and of belonging to organized crime. Those facts are absolutely false. That is, without any justification they place me on the same level as a drug dealer or terrorist. It seems to me an injustice, ”he said. To see the video click here. Filed Under: Sweet Revenge? Erika Buenfil reacts to Inés Gómez Mont’s problems and sends a message. Some images of this note come from this and this videos