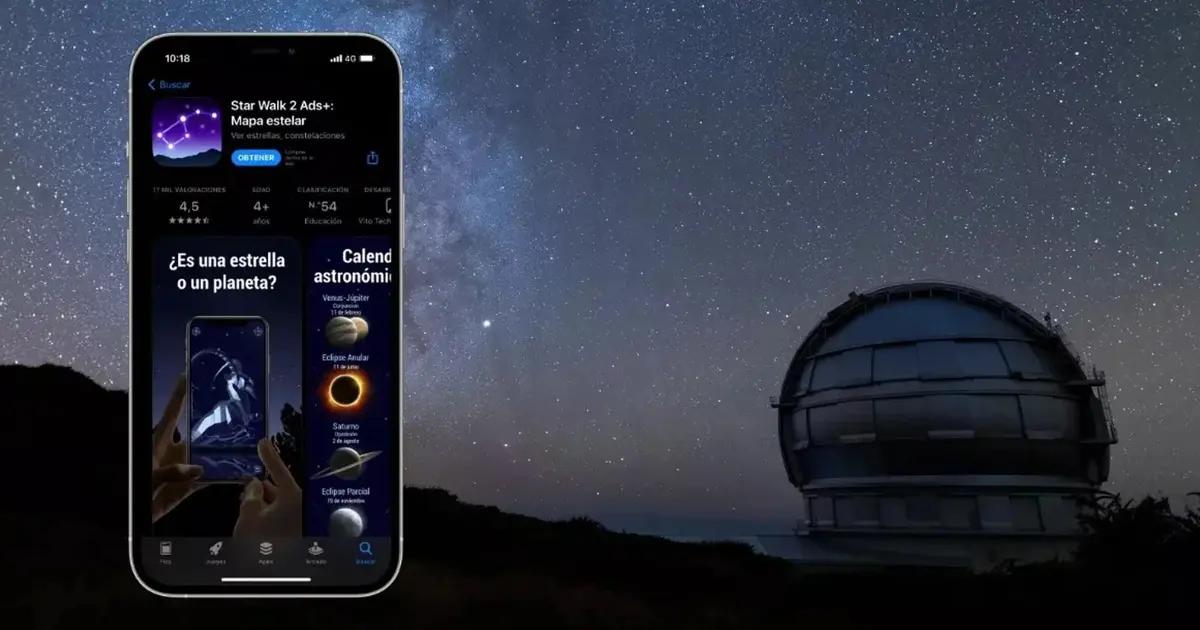 App stores such as the App Store and Play Store have in their different catalog options related to hobbies and curiosities of the users’ liking. For those who are interested in observing the night sky and astrology, these platforms also offer some free and paid tools.

Augmented reality, seeing the sky from other parts of the world, and identifying stars, among other activities, are some of the functions offered by these platforms that can be downloaded to users’ devices curious to learn more about outer space.

This application not only has functions for exploring the night sky and locating the location of stars in real-time but also offers users information about planets and other celestial bodies such as comets, satellites, constellations, and galaxies scattered throughout the cosmos.

On the other hand, the Star Walk platform, which is available on App Store and Play Store, can also generate sound environments based on audio and video related to outer space for an even more immersive experience.

It also has an augmented reality (AR) feature that uses the device’s camera to “project” onto the sky conceptual arts of the different constellations that can be seen in the sky from people’s locations.

This application, available only for devices with the iOS operating system, such as the iPhone, not only provides information on the location of the stars in the night sky using the device’s location but also offers information on weather conditions that will allow (or not) the viewing of stars from the home of users who have it installed.

It also has a section dedicated solely to providing information on which stars, constellations, and planets can be seen without the need for instruments such as telescopes, along with their exact coordinates and a percentage of visibility.

The weather prediction function is also available to users, so it does not have a purpose, but it can be of use in other aspects. All of the above features are also available in the Apple Watch version of the platform.

On this platform, like Star Walk, has a special augmented reality function with which you can view the sky using your phone or tablet to follow the trajectory of the stars in space. Users have the possibility to choose a particular star and “register” it only within the application with a special name.

This function will also be related to another one that allows users to know in depth the status of celestial bodies, so they will receive specific information about the assigned star, such as its current location, brightness, color, and distance from Earth, among other data.

With the application, it will also be possible to identify other planets and stars beyond the solar system and receive data related to each of them.

Unlike other applications, this one does not have an augmented reality option, but it is possible to direct the camera to the sky to locate the stars and constellations that are over a certain location. It is also possible to use a search engine to find these formations, even if they cannot be seen in the night sky.

In addition, because the constellations of the hemispheres are not similar due to the location of the stars, Constellation Map allows you to explore this part of the sky without having to be located in another country.

In the configuration menu, people will have functions such as locating the stars that are located below the horizon line, displaying the names of each one, and locating them in each of the cardinal points, among others.

This application, available in App Store and Play Store, also has a special augmented reality function dedicated exclusively to the visualization of constellations and stars in the sky according to the location in which users are located, along with some concept arts of each of them.

For the more amateur people, this platform can also predict future events such as planet alignments, lunar and solar eclipses, favorable weather for stargazing, and assign them a date on the calendar within the app to set a reminder for each case.