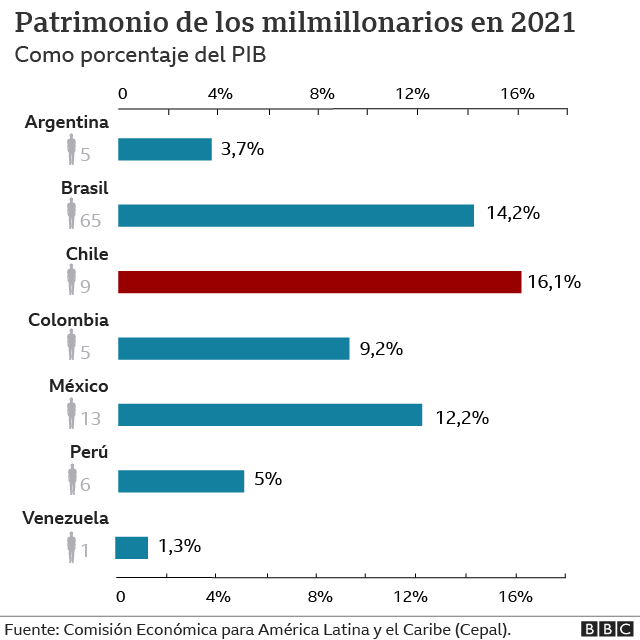 Chile was the country in Latin America that in 2021 concentrated the highest level of wealth among the ultra-rich in relation to the size of its economy.

The joint wealth of the richest Chileans was equivalent to 16.1% of the country’s Gross Domestic Product (GDP), as calculated by the Economic Commission for Latin America and the Caribbean (ECLAC), using data from Forbes magazine.

These calculations only consider the so-called “billionaires”, that is, those people who have assets of at least US$1,000 million.

Globally, there are 2,755 people who belong to that category, in a list led by Jeff Bezos (with US$177 billion), followed by Elon Musk and Bernard Arnault.

In Latin America there are 104 ultra-rich, of which nine are Chileanwith a heritage of the latter that at the end of 2021 was composed, according to Forbes magazine, as follows:

According to the Forbes list of billionaires in Chile, their fortunes are mainly concentrated in the finance, mining, forestry and retail sectors.

The concentration of wealth in these families is a reflection of the inequality that exists in Chilean society.

Why is wealth so concentrated in Chile?

Historians usually explain the origin of the social gap by going back to colonial times, in which most of the land was divided between the Spaniards and their descendants.

At that time the hacienda arose, in which society was divided between bosses, employees, tenants and peons.

Since that agrarian inequality, the concentration of wealth has been expanding to other economic sectors that exploit natural resources, such as mining, for example, which has made Chile the largest exporter of copper in the world.

In more recent history, the social gap widened in the 1970s and 1980s during the Augusto Pinochet regime with the creation of an economic model with little regulation that allowed the emergence of large family fortunes.

As the economist Osvaldo Larrañaga wrote in “Inequality throughout the history of Chile”, the gap increased with Pinochet through mechanisms such as “the privatization of public companies, that become the property of a small number of economic groups, the suppression and repression of unions, and the conversion of the welfare state into one of a residual nature”, among other measures.

In the group of the ultra-rich of today’s Chile we find the case of Julio Ponce LerouPinochet’s ex-son-in-law who became the largest shareholder in the company SQM (Soquimich), one of the largest producers of fertilizers, iodine and lithium globally, after the firm’s privatization.

With the return of democracy in 1990, poverty and income inequality decreased in the country, although wealth remained concentrated at the top of the pyramid, which was one of the main demands during the social upheaval that began in the country in October 2019.

This is how the issue of the social gap became a fundamental part of the debate of the electoral campaign of the presidential elections that gave victory to the leftist Gabriel Boric in 2021.

What is the “super-rich tax” about?

On March 11, Boric will become the new president of Chile with an ambitious government program that includes measures such as putting an end to the current pension system, transforming the health system and increasing taxes with the idea of ​​creating a welfare state.

This “transformative” agenda, which will require greater tax collection, will face a series of obstacles, such as the lack of a majority in Congressa limited budget and low economic growth projected for 2022.

To finance his plans Boric has proposed a tax reform “gradually and fiscally responsible” which aspires to collect 5% of GDP during its mandate.

The reform considers changes in the income tax for large companies, reduction of exemptions, green taxes, royalties for large mining companies, measures against evasion and avoidance, and a wealth tax.

The latter, known as the “super-rich tax”, would affect around 0.1% of the population.

A blow to investment?

The tax reform proposal has been the target of harsh criticism.

Those who oppose the idea claim that it has not served to raise significant amounts of resources in other parts of the world.

“The most famous case is that of France, where the millionaires went to live in Belgium. It was later removed because it turned out to be useless,” said economist Bernardo Fontaine.

In many of the countries of the Organization for Economic Co-operation and Development (OECD) “it has been withdrawn,” Fontaine said.

Another of the most cited arguments against the initiative is that discouragedrod investment and, therefore, harmsrá economic growth.

Why create a wealth tax?

In most countries people’s income is taxed and not their wealth. The latter includes, in addition to income, financial assets, properties, land, yachts or any asset that forms part of the estate.

“In countries like Chile, Brazil and Mexico, we have seen that labor income inequality has decreased, but if we add income from capital, inequality remains more constantIgnacio Flores, coordinator for Latin America of the World Inequality Database of the Paris School of Economics and researcher at New York University, tells BBC Mundo.

In the financial markets, “the more money you have, the faster it reproduces”, a phenomenon that makes it very difficult for people to move towards the top of the pyramid.

“In Chile, social mobility is very low,” says the economist, especially when reaching the richest 10%.

Lack of competition in the markets

In Chile and Latin America there are higher levels of concentration of wealth because in some sectors there are very few actors, says Luis Felipe López-Calva, regional director for Latin America and the Caribbean of the United Nations Development Program (UNDP). .

“Wealth worries us when it comes from income due to lack of competition, not when it is productive wealth that generates well-being for a country,” he points out in dialogue with BBC Mundo.

Ahead of the looming discussion in Chile about how to apply a wealth tax, experts have been debating the best way to tax those resources.

Some say that the most effective thing is to create a property tax, since it is very complex to identify where the funds are invested in international financial markets.

Others consider that it is feasible to introduce a tax that also includes capital flows.

“Much of wealth is financial”says Pablo Gutiérrez, a researcher at the University of British Columbia, in Canada, in dialogue with BBC Mundo.

Faced with the argument that a wealth tax causes an outflow of capital to other countries where investors can get better returns, the economist points out that high net worth people prefer a stable country, instead of risking seeking returns in countries with tax advantages, but low risk rating.

“With a wealth tax you are controlling social discontent a little,” says Gutiérrez.

“And although it is true that entrepreneurs are going to have a lower return, in the medium term there will be a greater social stability and their businesses will be able to grow.”

“No one likes to be taxed. To nobody. But if it is done in a gradual and consensual way, ensuring greater social stability, they are not going to leave the country.”