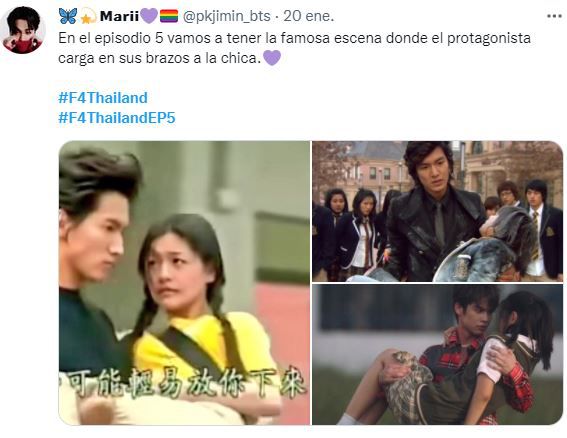 There are only a few hours left until the premiere of episode 5 of F4 Thailand, a new remake of Boys over Flowers. The Thai drama has been adding more followers chapter after chapter, and the romance between Gorya (Tu Tontawan) and Thyme (Bright Vachirawit) is flourishing more and more.

On Twitter, various fans have shared new images of the next F4 Thailand EP, where the long-awaited “rescue” will take place, with a charge included, between the main protagonists of the drama.

F4 Thailand: In EP 5 the iconic scene of the rescue will take place. Photo: Capture

What happened in EP4 of F4 Thailand?

Last week Thyme and Gorya had their first date. The leader of the F4 also met the family of the heroine of the new adaptation of Boys over flowers. However, the other members of the quartet Kavin (Win Metawin) and MJ (Nani Hirunkit) warned Gorya’s best friend that a possible relationship between the protagonists cannot be due to the difference in economic status.

In addition, we saw that Gorya was exposed in front of the entire institute after some photographs were revealed while working as an escort. Let’s remember that she accepted that because of her father’s debt. The final scene shows us a surprised Thyme looking at the photos.

GMMTV, the channel that handles the broadcast of the F4 Thailand series, will premiere episode 5 of the drama this Saturday at 8:30 pm (Thailand time). Next, check the schedules according to other countries.

The F4 Thailand series is broadcast exclusively on GMMTV (Bangkok, Thailand), but to the delight of all its followers, the chapters are published on the channel’s YouTube channel. If you live in Peru or other countries you can see it on that social network. YOU CAN SEE IT HERE.