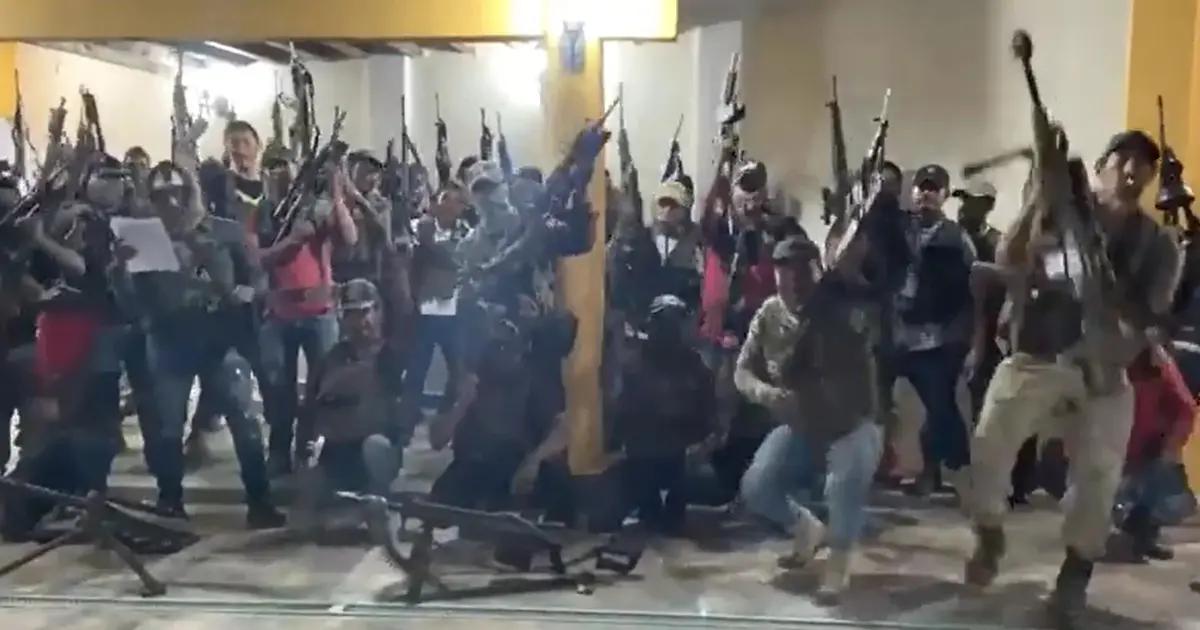 The entry of organized crime into the south of Mexico City became evident after the video recorded at the end of November by alleged members of the Familia Michoacana, warning of their arrival in Milpa Alta’s mayor’s office. However, their presence in the country’s capital had already been shown previously through similar confrontations and threats.

Although this criminal organization has greater control in the State of Mexico (in municipalities such as Chalco and Nezahualcoyotl), its illicit drug dealing and extortion business have spread to the borders with Guerrero and Morelos, as well as in the southeast of the CDMX, mainly in Milpa Alta and Tlahuac, where they have disputes with other criminal groups.

Even though the Mexican federal authorities had been boasting about the decline of the Familia Michoacana for a decade, on November 29, a video went viral on social networks warning of its resurgence, at least in Mexico City.

“We’re already here in Milpa Alta,” was the threat with which a group of more than 20 armed individuals announced their invasion of one of the largest municipalities in the country’s capital. “We are pure Familia Michoacana,” they said at the end of the brief video in which they also threatened other members of opposing groups.

Following the video broadcast, the Mexican Secretariat of Citizen Security (SSC) announced the reinforcement of security operations in Milpa Alta. However, several members of the Familia Michoacana had already demonstrated their power in the area months earlier.

It was last October 8 when the presence of armed men parading on board pick-up trucks and vehicles along the streets 5 de Mayo, Ignacio Zaragoza, Moctezuma and Iturbide, in the municipality, was reported. From the beginning it was indicated that the convoy allegedly belonged to a cell of the Familia Michoacana.

Although the movements of the alleged criminals were recorded in security camera videos – in which a gray Chevrolet Sonic and a Trax pickup truck can be seen – the crew members removed half of their bodies from the vehicles to “show off” their large-caliber weapons.

The vehicles were later abandoned in a property on Zaragoza Street, where firearms and ammunition were found. The authorities also managed to arrest three individuals who said they belonged to the Familia Michoacana.

A couple of days before these events, three people were murdered in front of a store in the town of San Antonio Tecómitl. According to the Mexican journalist Antonio Nieto, the business was owned by Jessica Montealegre, the alleged sister of Gaston Montealegre, leader of Los Gastones.

Therefore, it is presumed that both the murder and the parade of armed men in Milpa Alta at the beginning of October was a message from the Familia Michoacana to Los Gastones, who also have a dispute with the Tláhuac Cartel.

However, since May, the Familia Michoacana had already announced its arrival in the mayor’s office. In that month, a video recorded by alleged criminal group members was released, warning of their arrival in the town of San Antonio Tecómitl (where the triple murder and the parade of armed men were reported).

The author of the Chilango Cartel claimed that the Familia Michoacana had already settled in the CDMX. This contrasts with documents from the Mexican National Defense Secretariat (Sedena) since, according to the files leaked by the Guacamaya group, at least 13 criminal groups operate in the country’s capital.

The Jalisco Cartel – New Generation (CJNG), the Tepito Union, the Tlahuac Cartel, Los Rodolfos, Los Canchola, Ronda 88, Los Molina, Los Maceros, Los Tanzanios, El Maestrin, and Juan Balta are some of the groups mentioned. As can be seen, the Familia Michoacana is not included in this criminal map.

However, at the beginning of November, the Secretary of Citizen Security, Omar García Harfuch, as well as the Attorney General of the State of Mexico, José Luis Cervantes, presented updated intelligence reports in which it was mentioned that the Familia Michoacana has a presence in several municipalities in the State of Mexico bordering the CDMX.

It was indicated that Nezahualcoyotl, La Paz, Chimalhuacan, Chalco, Valle de Chalco, Ixtapaluca, Cuatitlan Izcalli, and Atizapan de Zaragoza is where the Familia Michoacana has the most control because in addition to hitmen they also have financial operators who are linked to extortion and extortion.

On December 1, García Harfuch assured that the video of the Familia Michoacana that was released at the end of November was very similar to the one from May, while the attorney general of the CDMX, Ernestina Godoy, indicated that the audiovisual material was being verified to verify its authenticity. Faced with this situation, the capital authorities reinforced security in Milpa Alta by deploying hundreds of members of the National Guard.