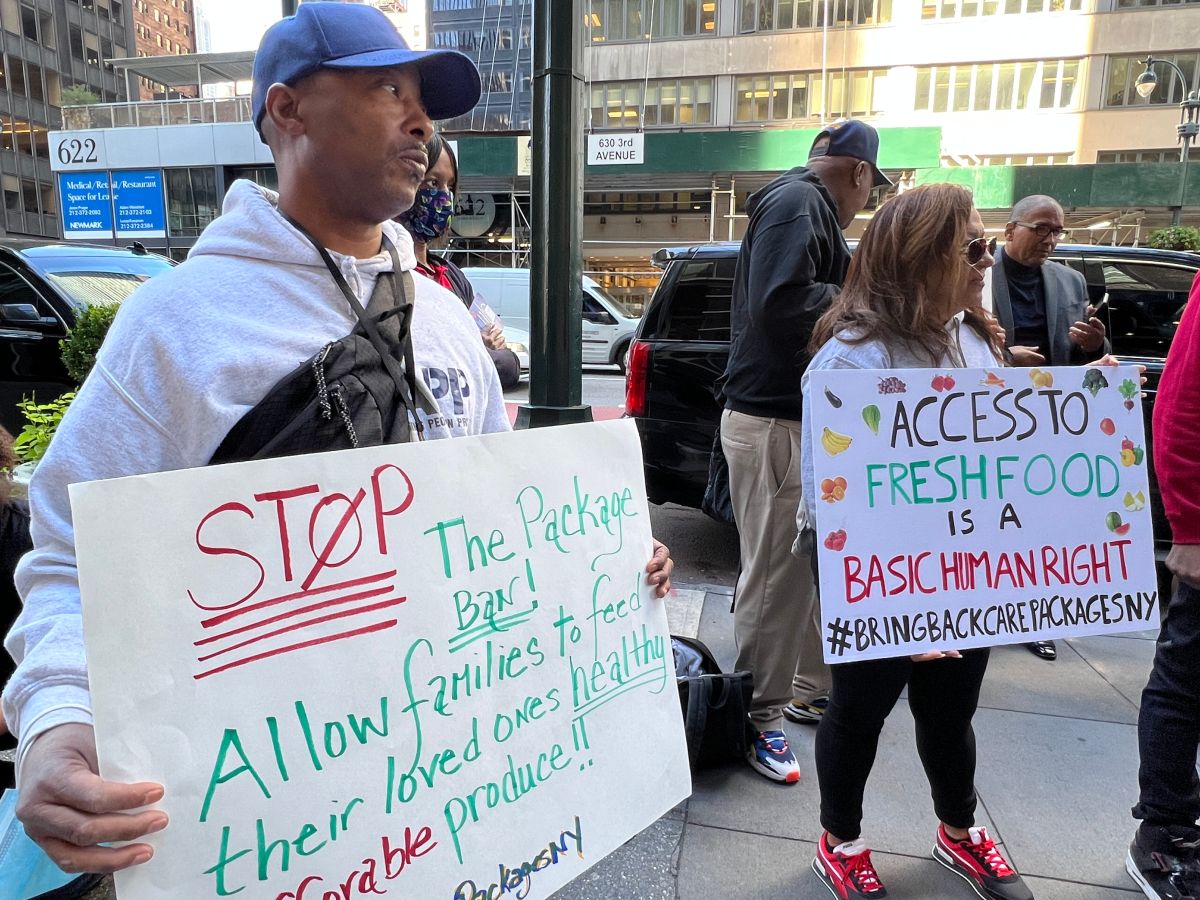 Since the beginning of 2022, the 30,000 inmates being held in more than 44 New York State prisons run by the Department of Corrections and Community Supervision (DOCCS) have been facing sharp changes in the protocols for delivering packages from family members.

And this Tuesday, after denouncing the prohibitions and limits that the prisons have imposed on inmates receiving regular packages, dozens of inmates’ relatives and community advocates demonstrated in front of Governor Kathy Hochul’s office to demand that she reverse the changes.

Puerto Rican Jeannie Colon, whose husband, Jose Colon, has been incarcerated for 24 years in Sing Sing Prison in upstate New York, said she was very saddened and upset with the change in policy that prohibits people from sending food packages directly to incarcerated family members, and limits the number of personal packages that can be received to two per year.

The community leader called on Governor Hochul and the state Department of Corrections to take the new protocols off the map, which were imposed, she mentioned, under the excuse that packages received by inmates encouraged the smuggling of prohibited items.

“That is a big lie because the packages we took to our loved ones always went through an exhaustive review. Contraband is coming in in other ways that they should investigate, go to the root of the problem, and not punish our families and inmates,” Colon said.

“Sometimes they don’t have toilet paper, they don’t have soap, they need healthy and nutritious food, and by limiting the packages we can give them, their needs will increase, and everything will be more expensive for us with the astronomical prices charged by the few suppliers that are approved,” the Hispanic woman denounced.

“They are doing business with the dignity of our people, and at the same time, they are putting an end to moments that unite us. For example, when I went to buy things for my husband, we always talked. That doesn’t exist anymore and with the companies to send the packages everything is very expensive, and I can’t afford it.

Agirah Stanley, director of the Alliance of Families for Justice, a former inmate of New York prisons, called the ban on the delivery of packages to inmates an unjust act that discriminates against those most in need.

“Packages to our people in prisons are an act of survival. It is unacceptable that these limits have been created, and that is why we demand Governor Hochul to end these bans today and say no to the vendors,” the activist commented. “We are already burdened with many charges, and we cannot afford to pay costs charged by these companies. Many families don’t have credit cards to order online, and others don’t even have internet. The governor must understand that when we talk about prisons, we are talking about families with the lowest incomes in the communities.”

The young woman also criticized DOCCS for trying to justify the change in protocols and limits on package deliveries to the internal traffic of unpermitted products.

“When you bring something into the jails, the packages and you are inspected from top to bottom. Dogs are checking even our private parts, and now they are going to say that with those packages, contraband comes in. They have X-rays. Use them. They have eyes, noses, hands, and intelligence to check the packages. It’s just excuses and lies to say that contraband enters through there,” added the former inmate.

Teresa Grady, a member of the Coalition of Families for the Release of Elderly Inmates, shouted at the top of her lungs that the inmates’ relatives would not allow a basic right to receive packages to New York prisoners to be limited.

“I come here to speak loud and clear: Governor, the packages cannot be limited. You cannot come to deny the nutrition that the inmates deserve. My detained husband suffers and needs tomatoes, vegetables, and healthy food that they don’t receive in the prisons,” said the woman, who added that her pocket couldn’t stand the new protocols.

“Besides, sending packages to our people with the new policies, through companies, means more money and will make things more difficult for the neediest people, like me, because I can’t pay for those shipments now, so we need the packages to be reinstated, like before, now,” added Grady.

The demonstration in front of Governor Hochul’s office coincided with a series of similar protests that took place in other corners of New York State, including Long Island, New York, Westchester, Albany, Syracuse, and Buffalo, where more than 100 families pressured the governor to repeal the new package delivery protocols.

Veronica Finnerman of New Hour for Women and Children Long Island stated that the packages have the quality of life significance.

“I spent three years incarcerated hundreds of miles from my family. They couldn’t visit me. I depended on my care packages every month to survive. State food is hardly decent for human consumption. The commissary is incredibly expensive and doesn’t have what we need,” the former inmate said, warning that the new rules have a stronger impact on women.

“This ban disproportionately harms women and pregnant people. I am a mother now and I can’t imagine being incarcerated and pregnant. The package ban does not affect the amount of contraband entering the prisons,” the woman added. “We all know where the contraband comes from, and not from packages. We are all human beings, mothers and women who deserve basic human rights.”

Jerome Wright, co-director of the #HALTsolitary campaign, stated that the denial of packages violates principles and rights.

“Why are we going down this road again? Bundles are essential for physical, mental, and emotional sustainability. Placing this additional burden on the family and friends of the incarcerated is unconscionable and criminal,” the activist said.

Anthony Bibbs of the Center for Community Alternatives Foundation, who was at the Syracuse rally, said the parcels are critical to surviving in prison.

“The packs supplement the terrible, often inedible, food in prison. They make sure you have toiletries and can stay clean. Without packs, you have to beg other people to meet your basic needs, which is hard to do in prison,” Bibbs commented.

“As a result of these baseless bans, families will be forced to use price-gouging vendors to send food to their loved ones. Food availability is extremely limited and cannot accommodate dietary, religious, and cultural needs,” the Coalition of Families said via a statement. “Fresh food can spoil during transit, denying incarcerated individuals access to healthy food.”

The protesters highlighted that in addition to the financial cost of the new protocols, there is a burden and emotional damage with the prohibition of packages and the damage to the health of incarcerated people.

They also denounced that in 2017 former Governor Andrew Cuomo tried to implement similar ban actions but had to stop them.

At press time, neither Governor Hochul’s Office nor the State Department of Corrections had stated the claims of the families of the inmates.

NY State Prisons by the Numbers