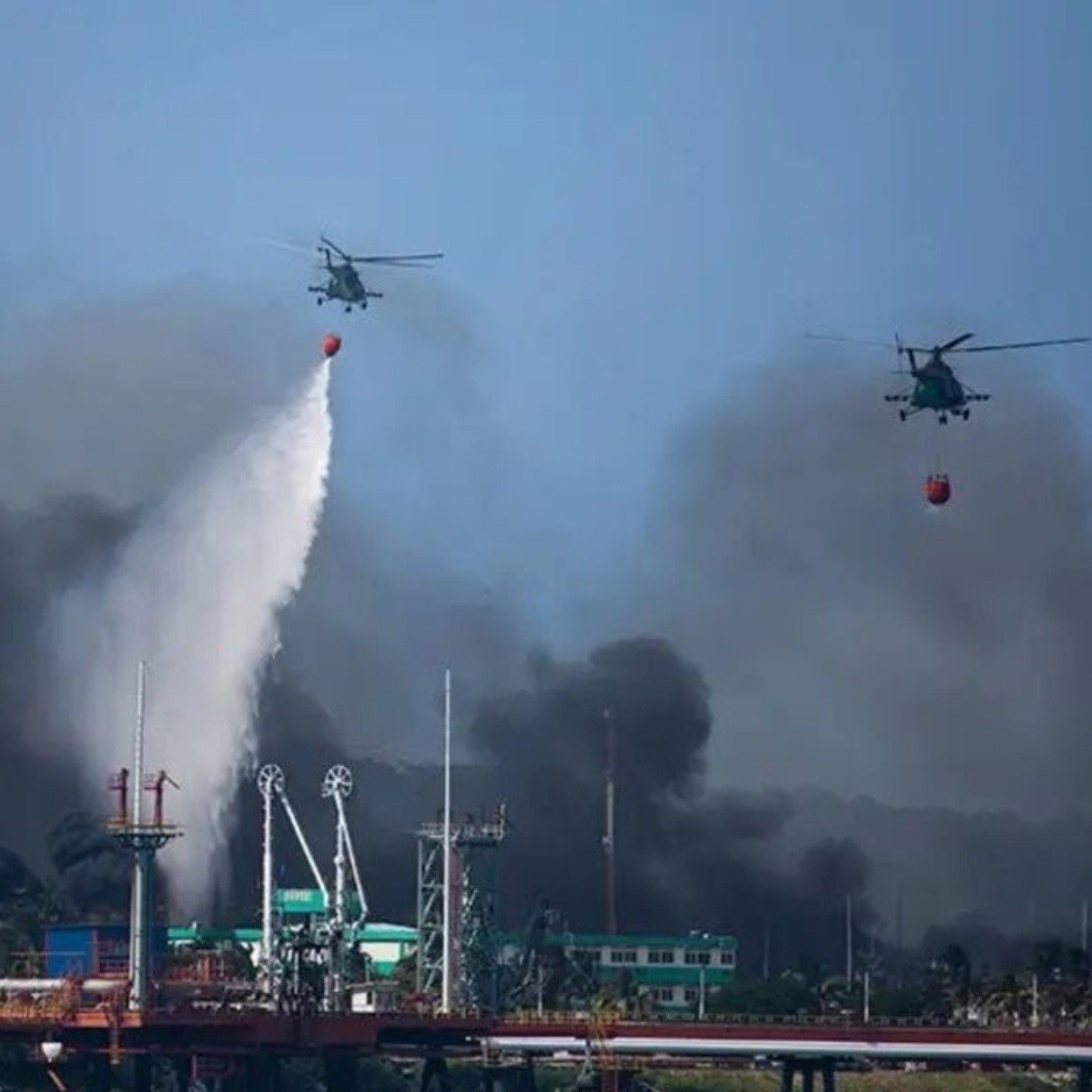 Cuba.- Firefighters open their way this Tuesday to suffocate the four tank fire of a crude oil storage base in Cuba, which has left one dead, 14 missing and that hits the island’s fuel storage and supply capacity.

Although it is still “a big fire”, this Tuesday “a different situation” is observed than Monday, said Alexander Ávalos Jorge, second chief of firefighting at the Cuban Fire Departmentwhile his men advance to apply the foam to put out the fire.

The four tanks are “in the same situation, with a collapsed structure, melted, with the surface still burning,” Ávalos said.

The fire started on Friday when lightning struck one of the eight tanks, each with a capacity of 50 million liters of fuel, located at the supertanker base in Matanzas, a city 100 kilometers from Havana.

By Monday, the four-tank battery at this base “was engulfed in flames,” Ávalos said, after three tanks collapsed, spilling the fuel they contained.

Four military helicopters equipped with 2,500-liter containers launched seawater on Tuesday trying to make their way to the affected area.

“We are going to advance until we reach the depth and be able to reach the main stage” to “rescue the victims who are on the scene,” said this fire chief.

The fire extinguishers also protect the other battery of four equal tanks, located just 150 meters away.

The supertanker base, built in the 1980s and located in the Matanzas industrial belt, is a “leading infrastructure in Cuba’s logistics system,” said Jorge Piñón, a Cuban expert in energy policy at the University of Texas.

With five docks to receive boats up to 180,000 tons and 20 meters of draftThis base receives imports of crude oil and the national production of about 40,000 barrels per day.

“The question that all of us have is whether this is enough to interrupt the supply of fuel to thermoelectric plants,” at a time when Cuba has serious problems generating electricity and “this adds one more problem,” Piñón said. AFP.

Since May, the authorities apply daily electricity blackouts throughout the country. These outages, which increasingly irritate the population during peak consumption hours, are due to the fact that the country’s eight thermoelectric plants suffer constant breakdowns and maintenance.

“The problem with the thermoelectric plants has not been a lack of fuel, but that they are very old and have maintenance problems. Now they will also lack fuel,” says Piñón, estimating that “the situation is serious”.

“By losing Matanzas, they lose the capacity to supply the thermoelectric plants.” The possibility of storing “1.2 million barrels has been lost there, that is where the problem lies,” laments the academic.

A 60-year-old firefighter died in the accident and 14 people are still missing. Authorities reported Monday that among the 22 injured who remain hospitalized, there were two people who had initially been included among those not located.

Of the 125 wounded who have been treated in hospitals in Matanzas and Havana, 103 have been discharged.

– “There are plenty of speculations” –

To support these tasks they have come to Cuba thirteen flights from Mexico and four from Venezuelawith technicians, firefighters, equipment and substances to control the fire.

This Tuesday, a logistical support ship of the Mexican Navy arrived in the Matanzas Bay with a helicopter on its deck.

The United States also offered technical advice, as reported in Twitter the Vice Minister of Foreign Affairs, Carlos Fernández de Cossio, by assuring that there is frequent communication between both governments to talk about the issue.

“The US Government offered condolences from Saturday, August 6 at noon via the State Department,” Fernández de Cossio reported in a tweet.

In addition, “he offered technical advice, which we also appreciated and accepted. There is frequent communication between the two governments. There are plenty of speculations,” the deputy minister pointed out, in response to online complaints that the Cuban government does not accept help from Washington.