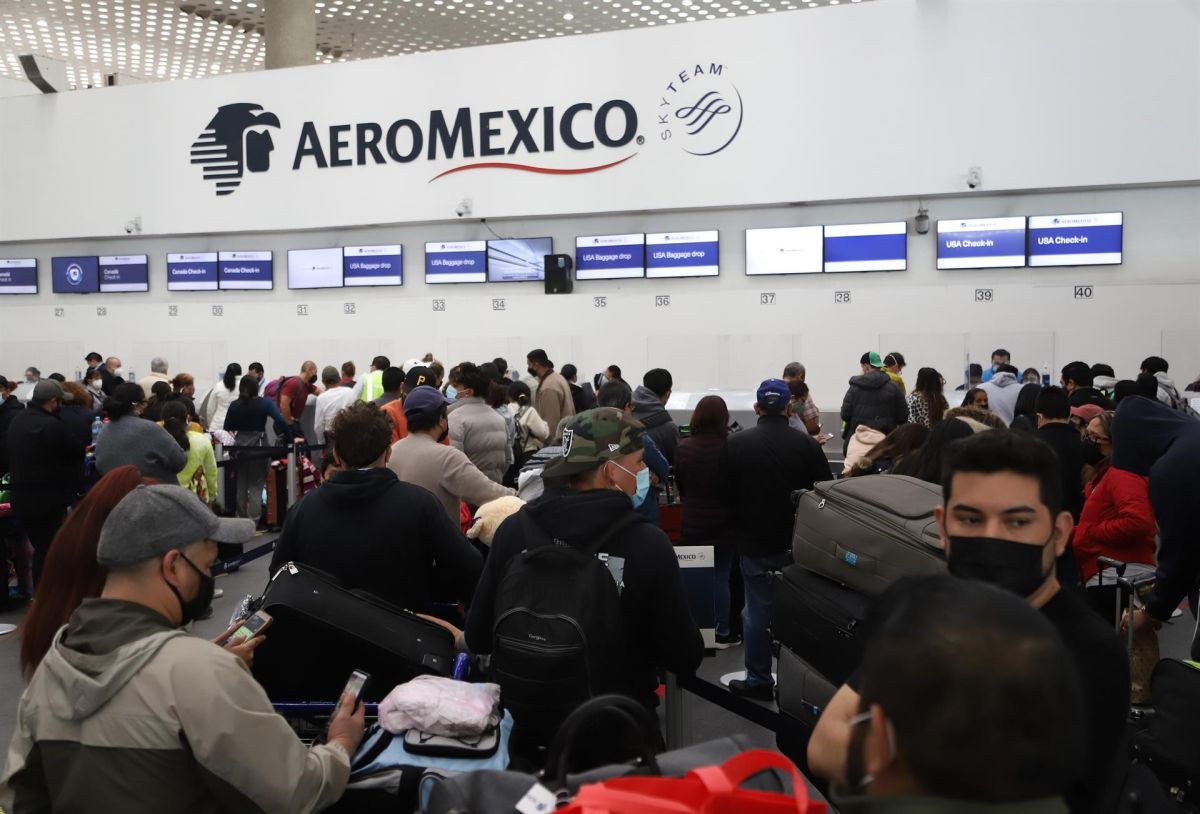 The cancellation of dozens of flights due to coronavirus infections among airline personnel on Friday caused long lines and crowds at Mexico City International Airport (AICM) mainly in terminal 2.

“The new wave of infections by covid-19 has impacted world aviation causing effects on some flights. (…) We are applying monitoring protocols to various collaborators, including crews, which has implied making adjustments to the planned operations, ”Aeroméxico reported in a statement.

Personnel from the Secretariat of Citizen Security of the capital mobilized to the airport trying to maintain the order and social distancing in the ranks, where travelers complain of spending hours waiting to check in their luggage, reported EFE.

Many they also protest that they are not receiving information on the status of their flights or on the time they will have to wait to board.

For its part, Aeromexico said that they are focusing their efforts on “minimizing the impact” of the situation. and in “serving customers in the best possible way”.

In recent days dozens of infected airline pilots have been reported, for example, from the Mexican Aeromar, as well as the cancellation of at least two dozen flights due to the advance of this new wave.

It is not only the covid

Volaris and Viva Aerobús, meanwhile, attributed the delays or cancellations to poor weather conditions in Tijuana, northern Mexico and on the border with California, particularly on Friday.

Quoted by The Associated Press, José Suárez, spokesman for the Union Association of Aviators Pilots of Mexico (ASPA), indicated that in the first six days of the year a minimum of 22 flights were canceled by personnel who contracted covid, as a “domino effect, because for each positive pilot all crew members are isolated with whom he had contact ”.

In addition, as in much of the world, there is a wave of infections from the arrival of the Omicron variant, reported for the first time in the country on December 3, although hospitalizations remain stable.

The situation of Mexican airlines is even lower than in the United States, where More than 5,000 flights were canceled in the first weekend of 2022 following the expansion of the Omicron variant of the coronavirus that has caused a shortage of personnel, combined with a snowstorm.

FlightAware does not specify the reason for the thousands of cancellations or delays in flights around the world, including the coronavirus, bad weather or situations derived from air traffic.

With information from agencies.

Keep reading:
– Airlines cancel more than 1,000 flights for the eleventh consecutive day
– Mexico reports dozens of Omicron cases and does not rule out a new wave of infections
– Mexico authorizes emergency use of molnupiravir from Merck to treat covid-19