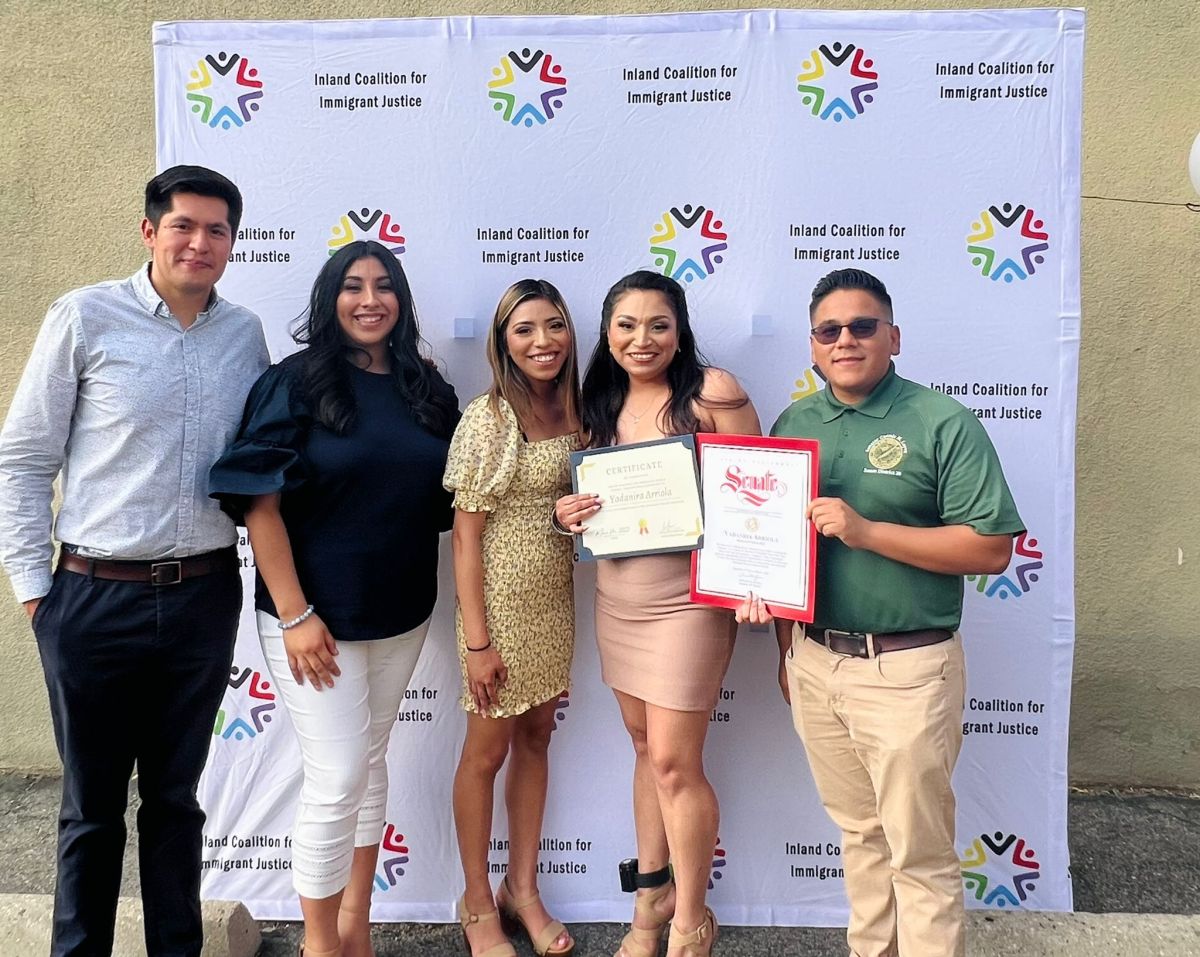 Despite the fact that Gabriel Espinoza was released from the Adelanto Detention Center in September 2020, his fear of migration has not gone away and he still suffers from nightmares.

That is why the program Resilient Voicess, focused on the reintegration into society of immigrants who leave immigration detention centers, created by the organizations Inland Coalition for Immigrant Justice (ICIJ) and the American Civil Liberties Union of Southern California (ACLU), fell in pearls

“I was taught exercises to avoid and deal with stress and trauma,” he says.

“They put me as a condition to go free, that they had to put an electronic monitoring bracelet on my ankle. I’m going to have 2 years with him.”

But he acknowledges that the fear of being arrested and deported is not removed because his case is pending resolution.

“I am dancing on a tightrope, and I am always nervous, with a lot of stress. I always dream that migration comes to stop me again.”

Espinoza is from Michoacán, Mexico, and has been in the country since 1961. He is married and the father of 2 adult daughters.

The program Resilient Voicess was designed to support formerly incarcerated immigrants in overcoming the barriers they face as they transition back to their communities.

“The classes that are taught are about trauma and mental health, how to navigate the immigration system, how to reach your goals in school, work and how to create your own company,” says Eddie Torres, a community organizer with ICIJ.

He says that at the beginning of the program, the participants did not feel comfortable talking about their traumas and mental health because several suffered physical, sexual or emotional abuse in Adelanto, and it was difficult to talk about those topics.

“Later on, they felt more confident to talk and learn how to handle the issue.”

Torres says that this program was inspired by the need they saw among the immigrants who were being released from Adelanto.

“They don’t know how to go back to their normal life in society, and start over,” he says.

Torres explains that this program will be taught twice a year, and also among the graduates themselves, a group of mentors will be created to help other immigrants who are coming out of detention.

“We want them to be a support and inspiration for other immigrants.”

Yadanira Arreola was detained in Adelanto for almost 2 years, and only came out on February 8 with an electronic monitoring bracelet on her ankle. She has lived in the country for 28 years. She resides in the city of Perris. She is the mother of 6 children and has a granddaughter who was born while she was in immigration detention.

“The program was a great blessing. It helped us look at which direction we want to go,” she says.

But in addition, he comments that they were able to talk about their traumas with psychologists and offered them therapy.

“They also taught us where to ask for help and see our options.”

The program motivated to help other immigrants who are in or out of detention, and who are disoriented.

“Our support is very important because even if we have a family, many times they have their own life outside and they don’t understand you as well as someone who was already there. So we want to be a voice of encouragement for immigrants still in detention.”

Arreola, an immigrant from Guatemala, reveals that she herself calls detained women by phone to listen to them when they have had a bad moment with an officer and to give them hope.

“I had many anxiety attacks when I was detained.”

Personally, he says that the program served him well.

“One leaves Adelanto full of fear, with fear and feeling very little. The program gave me knowledge and made me value myself and the things that I lost during the years that I spent in prison. Now I am even grateful for the happiness it gives me when the air hits me in the face”.

What’s more, the show inspired her to continue her education. “I want to finish my high school and study to be a dental assistant. I want to have my own space and be an independent woman.”

There were 7 graduates of the Voices of the Resistance program, 5 men and 2 women.

Zoila Barahona, an immigrant from Nicaragua who lives in San Bernardino, was one of the graduates of the reintegration program into society, after spending 2 years and 2 months detained in Adelanto.

“The program benefited me because they referred me to a clinic to receive treatment for the depression and anxiety that arose from my stay at Adelanto, where one is denigrated as a human being and the employees are very racist with those who do not speak English” .

He adds that the impact on the emotional health of the detainees in Adelanto was aggravated during the pandemic, since they were deprived of access to the programs, visits and pastors of the different churches that bring them spiritual relief.

She says she suffered a lot thinking about how her two youngest daughters would be during the pandemic while she was locked up in Adelanto.

“The best thing about this program is the psychological therapies after so much suffering. I still can’t believe I’m out and it even scares me,” says Zoila, 40.

José Topete, who was detained at Adelanto for 2 years 8 months, and was released last year, says the program is helping him regain his self-confidence.

“We came out completely psychologically damaged from all the abuse that one sees and I even watched a colleague die.”

He adds that thanks to the Resilient Voices program, he learned how to talk to people, how to look for work and how to integrate into the community.

“It is very useful for people who leave Adelanto because these places are centers of psychological torture, a kind of concentration camp. They must not exist. Our goal is for them to close. Thanks to this program, I now have some relief.”

“It’s the first in Southern California, and most likely in the entire state. We want the community to know that it exists,” says Torres.