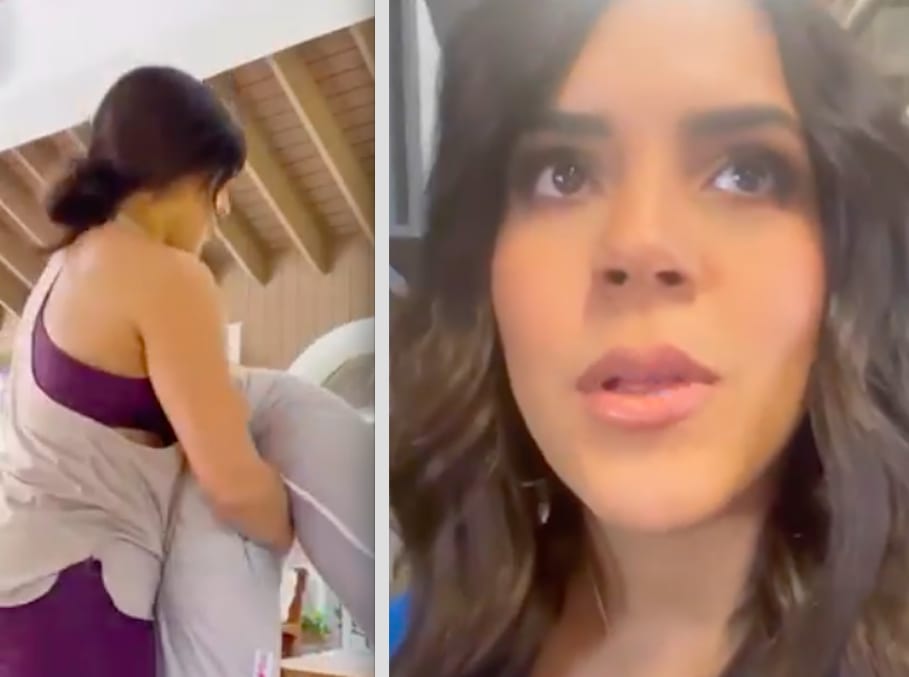 “This is me and I’m not ashamed at all.” The Dominican presenter Francisca Lachapel surprised on social networks by appearing in a video without any makeup, and she orders to silence all those who criticize her for her physical appearance, stating that “Not because she is on television means that she will always be always made up ”.

Things have gotten a bit complicated for Francisca, and since she announced that she was pregnant with Gennaro, also the son of businessman Francesco Zampogna, the 32-year-old driver has become the center of countless criticisms, which have been directed especially to their physical appearance.

Francisca is criticized for appearing without makeup on video

In a recent video, the host of Despierta América, silenced all the criticism that began to rain on her after appearing in a video on her social networks without any makeup, which was intended to help and give advice to users, however she was harshly criticized for “not having made up even a bit to appear on camera.”

According to People in Spanish, in the video that was harshly criticized, Francisca was at her mother-in-law’s house, showing the giant pillow that was of great help during her pregnancy, which she shared with the followers to alleviate the discomfort during the gestation.

After this, Francisca Lachapel began to rain endless criticism about it, because she had appeared in the video without putting on makeup, despite the fact that she was at her mother-in-law’s house and with her family, this caused her to publish another video on his official Facebook account and shut up all those teasing, stating that it did not bother him at all to show his face without makeup.

In the video, which she posted on her Facebook, Francisca with her face washed and no trace of makeup, the host began her message with the following: “Well with this video I’m going to make a few people get angry again, because in The video that I put yesterday where I was with my mother-in-law showing them a pillow, I saw that many people, and ladies, got angry because it did not come out fixed ”.

“Aren’t you all wearing makeup at home all the time ?; Francisca appears on video without makeup and shuts up all criticism

“She told me ‘oh fix yourself a little’, ‘put on a little make-up’ because I go out half careless for many,” continued the driver, before this Francisca thanked for these criticisms, however, she did not miss the opportunity to ask all those women who criticized her if they, too, were always wearing makeup at home:

“I want to ask a question here, everyone, all of you, when you are at home or at the mother-in-law’s house helping with some things, organizing, cooking, are you always super hyper mega makeup?”, He asked forcefully. “And I want to know to know if I’m a little behind.”

“I want to let my skin breathe”; Francisca appears on video without makeup and shuts up all criticism

Given this, Francisca confessed that when she goes out to the program or has an important meeting or goes for a walk, she does usually put on makeup, however when she is at home she prefers not to, to rest her skin from all the makeup she uses during her work: ” Obviously when they see me at work, with makeup 5 days a week, from 5 in the morning to one, obviously I like that when I’m at home I don’t put on makeup, to let my skin breathe ”.

“So I don’t know if any of you feel the same way, if when you are at home you are obviously simple and without makeup, or always when you are at home like this, because the truth is that I do not do it, only when I have visitors or a specific event, I take a wash and my makeup ”.

“This is me, and I’m not ashamed”; Francisca appears on video without makeup and shuts up all criticism

Francisca Lachapel confessed that she made these videos to be more in contact with her followers, but if she observes that people continue to bother her, she will have to put on makeup, but that it is very likely that she will stop doing them more often: “If some bother them, I don’t know Maybe I have to start putting on my makeup before making a video, but if I warn you that I will have to go through the makeup process to tell you something, then I will never publish anything, especially now that Gennaro occupies 80% of my attention ”.

“This is me, and I am not at all ashamed to go out without makeup, to truly show what I am, of course when I’m at work they see me super makeup and production and everything, but I’m at home I’m normal, like most of all of us, or is it that if I am on television I must already be wearing makeup even though I am at home? “

To end her video, the host asked her followers if it was necessary for her to appear with makeup on all her recordings despite the fact that they will no longer be uploaded so constantly: “Should I do it all the time because I work and I am a public figure and be wearing makeup all the time to make these videos? I will be reading your comments and if the majority wins I will put on makeup ”.

After this, Francisca Lachapel laments because her face without makeup made many people annoy: “And I regret and I apologize to whoever was offended seeing my little face as it was washed,” concluded the Dominican comedian. VIDEO HERE

They window it! The host Francisca Lachapel, shared with her Facebook followers a video while doing one of her exercise routines, to recover her figure after Gennaro’s delivery. Lachapel decided to share the clip where she goes out with her makeup artist Jomari Goyso, who begins to talk about her taste for sweet food and pasta, so she encourages her to exercise so that she can eat the dishes that she likes the most.

He tells her that he observes the changes he has seen in her figure and makes fun of her breasts, saying that the most noticeable is how they have ‘gone down’. The driver does not allow herself to be disturbed and begins to complain (at stake) about her motivation to help her exercise. In the comments, the public lets the Dominican know the good team she makes with the Spaniard, in addition to being flattered by the changes observed in her body.

The video that Francisca shared

The Dominican shared with her Facebook followers one of the routines that she is implementing in her exercise routine after the birth of her son, Gennaro. In the clip, Francisca is in the company of her friend and makeup artist, Jomari Goyso, who spends her time ‘bothering her’ saying that he motivates her to achieve her goal for that day.

“I’m really focused on exercising and guess who came to take my focus off me? Obviously Jomari Goyso. But that was not all, they have to see how I finished and how he came out, “wrote the host of Despierta América at the bottom of the video that she shared with her followers, about the exercise routine she was doing in the company of her dear friend.

The video, which lasts 3 minutes, begins with Francisca complaining about Jomari while she is exercising and her friend arrived unexpectedly. The man quickly begins to exercise with his friend while the driver’s coach is giving him instructions on how to perform the routine he formed for Lachapel.

“Look what Jomari is doing to me,” commented the driver and the coach focused the camera on Goyso, who was making fun of Francisca, who was having problems doing the exercise because she was suffocating from the effort she was making at that time. .

Jomari clarified to the camera that if he was bothering her it was so that she could motivate herself to do the training routine that the driver had been assigned. She teasingly responded by telling him that this was not a good way to motivate another person, but she still gets to exercise with her friend.

“I’m bullying for reason,” the Spanish said to the driver while they were doing the routine that the coach had assigned them. “Bullying, that is not motivational,” the Dominican replied to her friend who began to laugh while her coach continued to give them instructions to improve their movements.