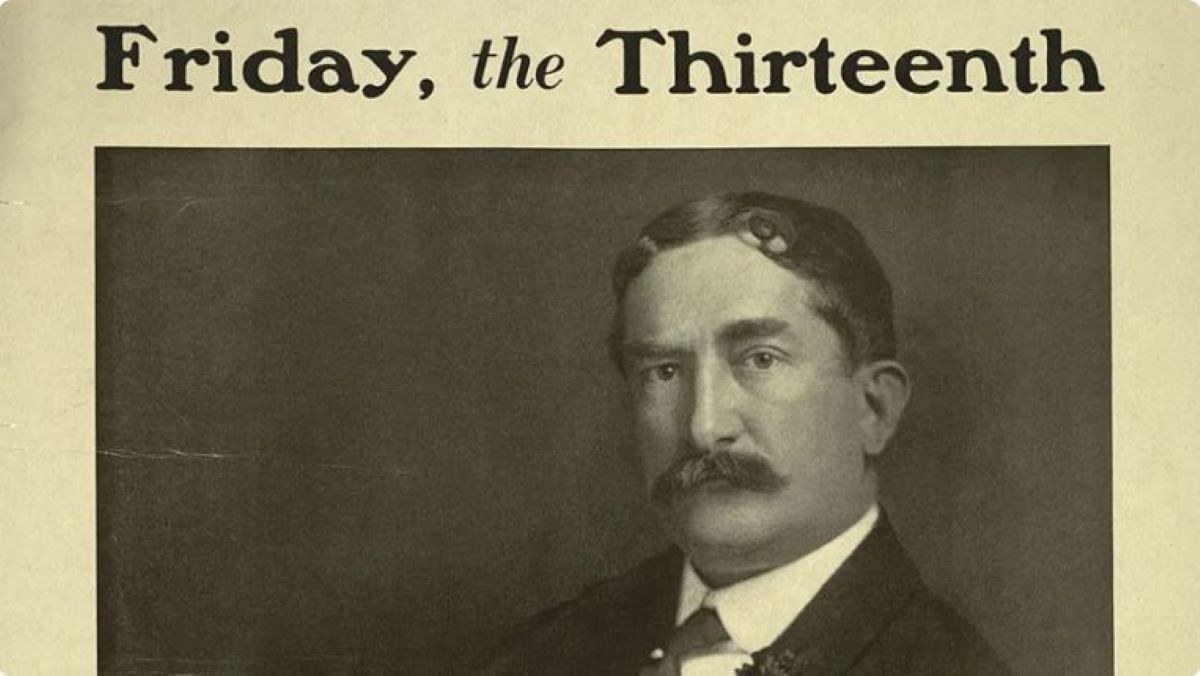 Do you suffer from paraskevidekatriaphobia or fear of Friday the 13th? Well, part of the blame rests with a 19th-century American financier named Thomas W. Lawson.

Although the superstition is very long-standing, he is credited with having fixed it in modern consciousness with his novel entitled, precisely, “Friday the 13th”which is about a stockbroker who chooses that day to bring down Wall Street.

But this date’s association with Lawson doesn’t end there. Legend has it that a few months after publishing his novel, more precisely on Friday, December 13, 1907, a huge sailboat that the tycoon had built sank -the largest sailing ship ever built without a propulsion engine- and which bore his name.

(Actually, the shipwreck occurred in the early hours of Saturday the 14th, but in Boston, where Lawson lived, it was still Friday the 13th.)

The vessel was carrying about 60,000 barrels of light oil when it sank and the spill it caused is considered the first great ecological disaster of his kind.

Lawson’s connection to Friday the 13th is just one of the reasons that made this man memorable, who was born and died in poverty, and in between he was one of the richest people in America.

Lawson was born in 1857 in Charlestown, Massachusetts, and as a child lost his father, a Civil War veteran who died of his injuries.

At the age of 12, he was forced to work and got a job as buttons on a bench in Boston. There he forged his ambition to become rich.

From a very young age he became a specialist in buying and selling shares, and historians say that he had an exceptional talent for choosing the securities that would be most valued.

But his fortune would make it in a more questionable way: using his knowledge to manipulate the financial markets.

Lawson specialized in mining, especially in the copper market, since Boston was the financial center of that industry.

The copper boom at the end of the 19th century helped it become multimillionaire.

But while he was getting rich, many of the people he advised were losing huge amounts of money, making him one of the most controversial “robber barons” of the so-called Gilded Age.

One of his first fiascoes was his advice to invest in the Grand Rivers iron ore mines in Kentucky, which ended in failure.

But his most questioned business -and at the same time, the most lucrative- was his participation in the creation of the mining company Amalgamated Copper Company, a conglomerate that was supposed to monopolize the copper industryjust as the Rockefeller brothers’ Standard Oil had monopolized oil.

In 1899 Amalgamated Copper bought the Anaconda Copper Company, a prosperous copper miner, through an operation that some experts consider “the best deal in the history of wall street”-although also one of the least honored-.

The shareholders, eager to participate in this company promoted by the great business barons, paid a fortune for the titles, without imagining that it was a shell company (Amalgamated Copper didn’t even have real directors, they were employees of Standard Oil).

As it turned out, the holding company had been created as part of an ingenious plan to acquire the Anaconda Copper Company, which would end up being one of the most important mining companies in the world during the 20th century.

From speculator to reformer

Not content with the bad reputation he had earned, Lawson made new enemies when in 1906 he published a series of articles under the title: “Frantic Finance: The Story of Amalgamated”, in which he revealed the shady dealings he carried on together. with his associates Rockefeller and Rogers.

The billionaire, who at the beginning of the 20th century had begun to suffer great economic losses confessed a whole string of sins and crimesfrom how they bribed the Legislature to how they “juggled” people’s money.

One of the book’s chapters also denounced “how Wall Street’s manipulations affect the country.”

Lawson had become a reformer. He published further exposés of the evils of what he called “the system,” including his 1907 novel “Friday the 13th.”

However, neither the public he had cheated nor his peers, who they made him an outcastwere interested in hearing your ideas on how to make the financial market fairer.

The eccentric personal life of the tycoon, who had built a huge complex called Dreamworld in the city of Sciutate, in addition to expensive ships, such as the Thomas W. Lawson, was squandering his fortune.

For the 1920s his debts were so many that he had to auction off his assets.

However, his legacy has endured. Some still point to his business brilliance (in 2007 writer Ken Fisher included him in his list of “100 Minds That Made the Market”).

Others praise his attempts to reform Wall Street, something he put a lot of money and effort into — albeit hypocritically, once his luck ran out.

And there are those who, without knowing it, enjoy other genius coming from the prolific mind of this financier turned vigilante and writer.

For example, if you’re reading this in your living room, sitting or sitting on your couch, you may owe your comfort to Lawson, who He ordered the design of one of the most popular models of sofas, which still bears his name.