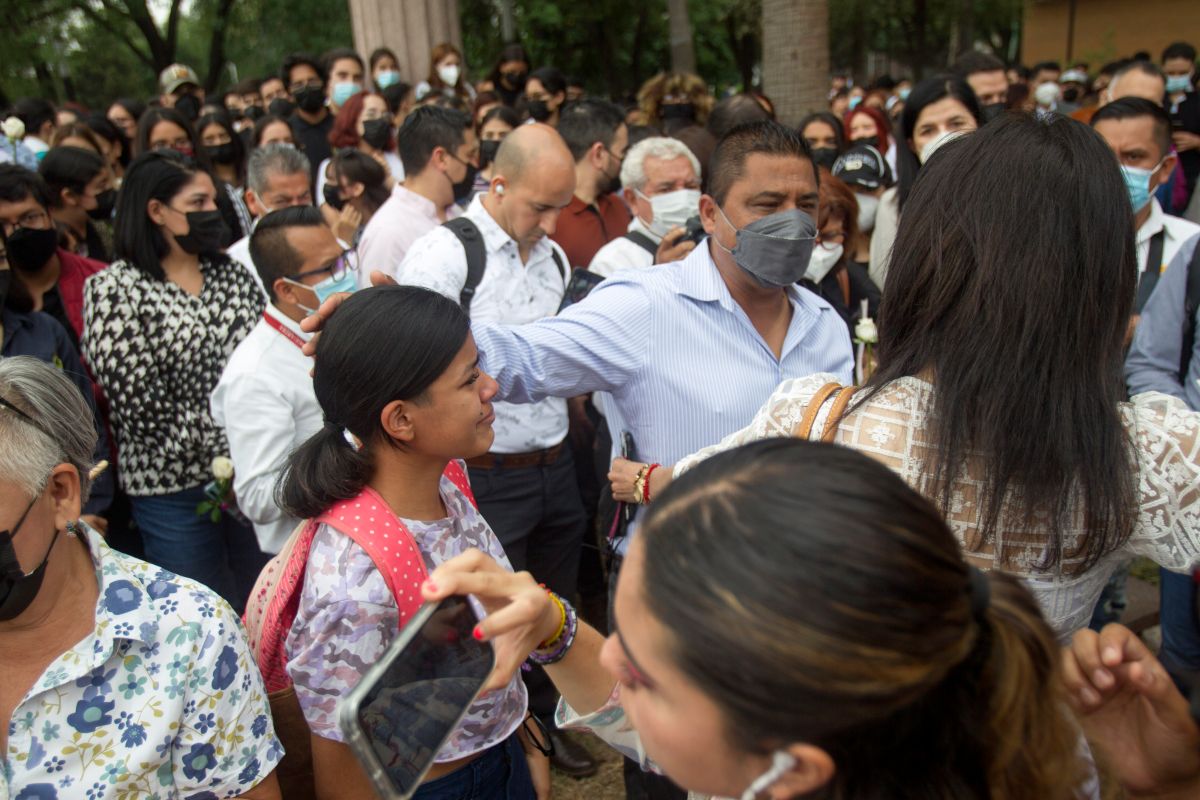 The two friends of Debanhi Escobar, the young woman found dead in the cistern of a motel in Nuevo LeónMexico, said they fear for their lives after receiving threats on social media.

Saraí and Ivonne spoke with Las Noticias de Televisa about what happened on the night of April 8 after the party the three attended and before Debahni lost track. The next day, the young woman, a law student, was reported missing. It wasn’t until last Thursday that the remains of the girl were recovered by the motel pit.

“We couldn’t get close, for obvious reasons, to the wake because of threats and things like that. But, just the same, my deepest condolences to the whole family“Ivonne indicated about the funeral events to fire Debanhi.

“We would not have liked it to have ended that way. We never thought that she would reach such a degree … ”, added Ivonne.

Saraí said that she had known Debanhi for four months, and that they had been going out together for two months. While Ivonne met her the same day of the party to which the three attended in a country house in Escobedo.

“The times we went out were like five times, four, and we went out to parties, and she had never seen her that way until that day,” Saraí recounted.

“She was drinking and all of a sudden she says, ‘I’m bored of being at this party, we’re leaving’. And I said, ‘ok, well, if you want,’” she continued.

It was then that they decided to go to another party. But arriving at the site in a taxi, there was no event. At that moment, they go to the aforementioned fifth, and again, they come across the empty place.

At a fourth stop, there was an incident with some boys who were with them for the alleged theft of a cell phone, which apparently turned out to be a mistake.

In a following event they remained until 3:50 p.m. until Debanhi allegedly ran from the scene.

“She runs outside alone… first, some people we didn’t really know wanted to take her away, because they saw her already taken and so on. Ivonne calls me and says, ‘Sari, they want to take Debanhi.’ Scared, I turn around and say, ‘Who wants to take her away?’ So I say, ‘how are they going to take her if we don’t know them?’… ‘Well, we want to take her to her house.’ ‘No, no, she’s coming with us, she’s leaving with us.’ So they said: ‘Well, you know’”.

Afterwards the girls did not see those people again.

“When they put Debanhi down because they were carrying her, she runs to the men’s bathroom, she gets in there, she doesn’t want to come out. She gets stupid saying that we leave her alone, that she doesn’t care, that her parents were lawyers, that she paid us money if we left her, and, after that, she runs off to the pool by herself, and as if she wants to jump . I stop her, and tell her no, don’t worry. She starts waving her hands and telling him to leave her alone. I back up and she runs again, goes around the pool…”, he recounted

A boy tried to control Debanhi until he ran out of the fifth, but the young woman bit the boy on the shoulder. He and other people, including her friends, followed her outside.

“We had to leave now, that is, because we worked the next day early in the morning. Another because of the situation, because she was very ill, that is, we no longer knew what to do, we were really desperate because she had never been like this. I had never seen her like that, “said Saraí.

It was there when Ivonne decided to speak again to the driver who had previously offered them the service,

Arriving at the scene, Debanhi ran to the taxi, got in and slammed the door. Supposedly, Debanhi asked the girls to leave her alone and in peace.

“Since she was already out of control, we thought it convenient for her to leave because if she didn’t want us to be helping her… She slapped us many times, she took us away. Perhaps it is the best thing for her if she wanted to leave and she got on, for her to leave, ”explained Sarahí.

Sarahí assured that she was calling Debahni’s fatherbut it was not until 8:35 the next day that Mario Escobar called him back.

“I was desperate looking for help. I remembered that I had her cell phone once she went to drop her off at my house and that’s why I called her father, “she pointed out.

According to the Attorney General of Nuevo León, the 18-year-old girl died of a blunt blow to the head. But given the deficiencies reported in the investigation, the authorities have not yet been able to establish whether it was a murder or an accident.

The young women considered the questions against them unfair for having left Debanhi alone.

“We have threats that they are going to kill us, that they are going to make us disappear, that we were the guilty ones, that we are murderers, and many very hurtful comments on our social networks. That people thought that we were to blame and we really closed our networks, because from the beginning, the family, that is, the cousin made a tweet where she spread our names, ”Saraí questioned.

Prosecutor’s Office assures that Debanhi Escobar was still alive when she fell into a motel cistern in Nuevo León, Mexico