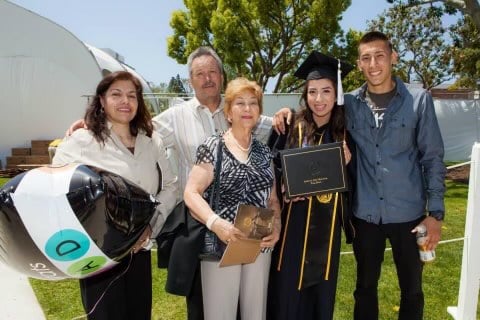 The painful separation from his parents and the abuse suffered in many of the foster homes in which he lived for seven years of his childhood, made Eugene Correa Jr., a misbehaved child. However, in his early teens he made the decision to focus his rebellion on mixed martial arts (MMA).

Today he is a champion of Jiu Jitsu, a sport of self defense and combat. He is known in the MMA world as “Conqueror”.

He has fought in different leagues of mixed martial arts such as Bellator and Smash Global; holds the record for a leg lock finish in the 10-second category in the first round; and has tied for seventh place (on a list of 100) in fastest submission in MMA history since 1993, according to Tapology, the website created for fans of mixed martial arts, boxing and other combat sports. It is also first place in the Imarani roll style leg lock.

He beat Okoli, making him a two-time world champion of the International Jiu Jitsu Federation.

But who is Eugene Correa Jr.?

28 years ago he was born in Long Beach. He is the son of immigrant parents from Jalisco, Mexico, who immigrated to the United States in the 1980s, and had four children.

But his childhood was not what Eugene would have wanted. “My dad is very good, but he had his vices and he didn’t pay much attention to me.”

One day, due to a family problem, the Department of Children and Family Services removed Eugene and his sisters from their parents’ guardianship and placed them in foster care.

“I was 3 years old. My sister Nancy, 5 years old and my sister Nora, 13. And I lived in those homes until I was 11 years old. The problem with these places is that the service and treatment are not good in most cases. Foster families have too many children in their care, and for many of them, we are a way of earning money. They don’t really care about us. Of course there are exceptions ”.

He says that he defended his little sister Nancy a lot so that the other minors would not harm him, but he also admits that he became rebellious and misbehaved. As a consequence, he remembers that the boyfriend of the woman where he lived beat him. “And he clearly told me that I was just a check.”

Eugene recounts that he lived with a family that made children fight. “The father of that house threatened us with death if we notified the social workers.”

The abuse was so great that he ran away when he was 9 years old.

“It hurt me that they had separated us from our parents, when in some homes where we live, there was a lot of abuse and tension. I had to see many couples arguing, insulting each other and slapping each other in front of us ”.

In fact, she broke her right elbow while in the care of a foster home agency in Southern California, where she says the staff made the children fight.

“This is how I ended up with my right elbow broken from an organized fight. I came to think that I could never play sports or the normal things that children do ”.

Precisely because of all those stories that he lived, he would like to contribute his experience to improve the foster home system, and empower the problematic minors who live in those groups.

Eugene believes that his parents’ lack of education and not knowing the laws of this country, led them to be taken away by the county.

“The separation affected me a lot. I was very distracted and fought a lot. I had to take pills for depression. “

At the age of 11 he returned to his parents, and from the age of 12 to 13, he went to live in Mexico for a season. “I lived on my uncle Pablo Correa’s Vista Hermosa ranch. There I learned to work, to milk cows, clean pens and grind corn in machines ”.

That time spent in Mexico made him aware of how lucky he was, and therefore, that he had to cheer up on school.

“When I was going to school in Mexico, my teachers and my classmates asked me, what are you doing here with all the opportunities you have in the United States when you were born there?”

Eugene returned to the USA, determined not only to change but to do something positive with his life, and he succeeded. He became a world champion in mixed martial arts like jiu jitsu and became a coach.

And even more, he is the first in his family to found his own business “MMA Strap” with the mission of empowering future generations through his own history and his knowledge in mixed martial arts.

Growing up in an abusive physical and verbal atmosphere, and forced to fight for survival, he understands the importance of giving back to the foster youth community, which is why he has been offering youth boxing programs in high school.

However, he harbors the dream of contributing to his father’s town, San Diego de Alejandría in the state of Jalisco. “I would like to open a non-profit organization to motivate children to become professional fighters and create a free gym in San Diego, Alexandria and in poor countries.”

Although he currently makes a living as a coach, his main dream is to be an MMA champion, but also to be an officer in a law enforcement agency. “I am studying and preparing to pass the exam.”

While Eugene says he felt heartbroken from being separated from his parents as a child, and abused in foster care, he is content that instead of ending up in drugs or crime, the emotional wounds of childhood They made him become what he is today, a fighter and a fighter beyond the Octagon (the platform where MMA competitions are held).

You can learn more about Eugene Correa Jr. on his website at: correamma.com/