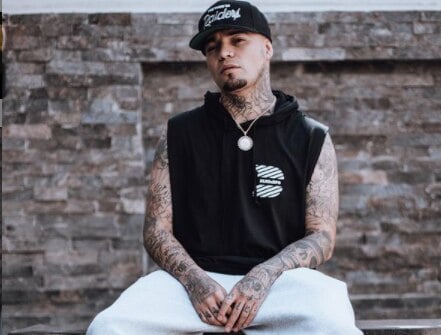 Gera MX is one of the greatest representatives of the Mexican Hip Hop scene; also known as Cachorro 444, the rapper has achieved international success and so he demonstrated this Friday, February 18 with the announcement of his Triple 4 Tour which includes dates in different cities in Mexico and the United States.

Through his official Instagram account, he informed his fans and followers about the 50+ dates that he will offer concerts throughout 2022 in cities in Mexico such as Guadalajara, Mexico City, Queretaro, Morelia, Puebla and Merida, but also in US locations like San Antonio, Houston, Las Vegas, San Diego, among others.

It is worth mentioning that the first part of the Triple 4 Tour will cover some dates for the “Los no tan tristes” project, an album that was born from his friendship with fellow Sonoran rapper Charles Ans and Colombian Nanpa Básico.

The collaboration for “Los no tan tristes” Gera MX came up in 2020. In different interviews, the interpreter of Gran Pez has declared to have a close friendship with Charles Ans and several previous collaborations, so he invited him to make an album, a project  joined  by Nanpa Básico.

Through 9 songs and an intro, the trio presented a mixture of bohemian sounds, romantic lyrics and sumptuous beats that gave a nostalgic and innovative facet to the Mexican and Latino Hip Hop scene.

Cachorro 444 could not leave this project out of his tour and thus the tour will start with the presentation of “Los no tan tristes” in the capital of the state of Querétaro on March 3, 2022. The prices for this event at the Josefa Ortiz de Domínguez Auditorium range from 600 and 1,200 Mexican pesos (approx. $30 to $60 USD).

“Triple 4 Tour. We are waiting for you to sing with all the Vagos in Mexico and the United States this 2022. To break the stage in all the cities! @richvagosent.” Gera MX posted on his official Instagram account.

It is worth mentioning that Gera MX, Charles Ans and Nanpa Básico will be in Mexico City on March 20 during the 2022 edition of the famous Vive Latino festival. They will also take their music to the Pa’l Norte Festival on april 2 in Monterey, Nuevo León.

Through his social networks, Gera MX announced that the pre-sale for his presentations in both the United States and Mexico will start on February 22, 2022.

While he started by performing free style rap in the streets of San Luis Potosí, Gera MX has become one of the most successful exponents of Hip Hop in Mexico. His talent and dedication have led him to collaborate with international artists such as the Spanish rapper Rels B, but also with great Mexican talents such as Christian Nodal, with whom he shared the success for Botella tras botella, a song that was positioned as one of the most listened to in 2021 and whose video reached more than 100 million views.

Apart from “Los no tan tristes”, Cachorro 444 has 5 other studio albums, among which “El Vicio y la Fama”, “Los Niños Grandes No Juegan” and “No Me Maten Primero de Hoy” stand out. He is currently working on his new record material and recently released the single Wassup alongside Mexican-American rapper Snow Tha Product.