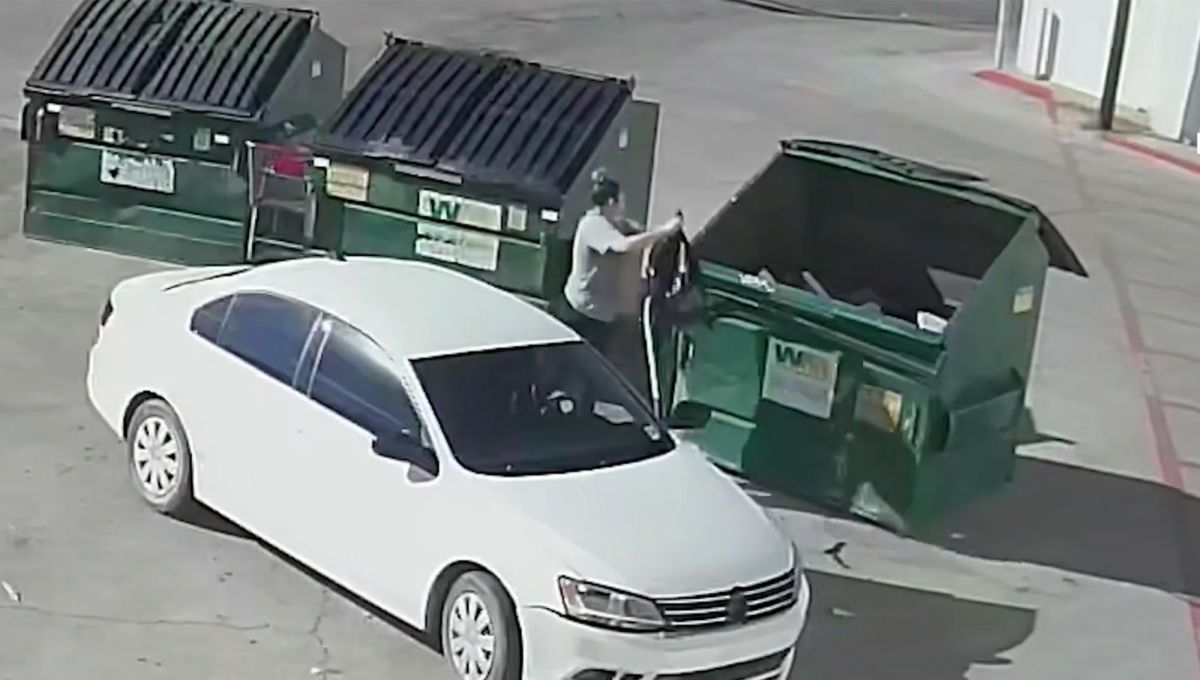 An 18-year-old woman was seen arriving at the dumpster on North Thorp Street in Hobbs around 2 p.m. last Friday – Photo: Surveillance cameras from de Rig Outfitters and Home Store / Courtesy

A denatured 18-year-old New Mexico mother who threw her newborn baby into a dumpster was released from prison after posting a $ 10,000 bond.

Alexis Avila was arrested and charged with attempted murder and child abuse after her baby was found clinging to life Friday night in 30-degree weather, nearly six hours after being thrown in the trash.

The young woman told police that she did not know she was pregnant until the day before giving birth to her baby in a bath.

Acting Hobbs Police Department Chief August Fons said that he had never encountered a case like this before.

“If you are struggling with a new baby, the best answer is to find someone who can help you with that,” he explained. “Contact us and let us help you get through the situation,” Fons added.

In the video captured by the video surveillance camera of a business, the woman is seen reaching into a white Volkswagen Jetta and indifferently and forcefully throwing the bag in which her baby was going, to the dumpster in Hobbs, New Mexico, around 2 p.m. on January 7.

After six hours, the clip shows how three people who were picking at the garbage find the baby alive, who still had the umbilical cord attached.

The woman confessed to throwing her son away and explained to police that she did not know she was pregnant until she went to the doctor Thursday for a stomach ache, according to a criminal complaint obtained by KRQE on Monday.

The next day, Ávila who said she had ended her relationship with the baby’s alleged father last August, gave birth to her son in a bathroom in her parents’ home.

Alexis panicked after the baby was born and wrapped it in a towel, placed it in a white plastic garbage bag and then a larger black garbage bag, and drove to Broadmoor Mall around 2pm, to dump it in the dumpster.

It was around 8 p.m. that a group of scavengers identified by the police as Michael Green, Hector Jesso and April Meadow, rescued the baby after hearing his cry, which originally mistaken for sounds of a cat or dog.

New Mexico has a safe haven law, which allows a person to leave a baby no more than 90 days old with hospital staff without fear of criminal prosecution.

Meadow kept the baby warm by holding him in her arms until help arrived and he was transferred to a hospital in Hobbs before being taken to another hospital in Lubbock, Texas, which has a more advanced NICU unit.

The minor, who was found hypothermic and since then he has received a blood transfusion and was placed on a feeding and oxygen tube, is in stable condition, police said Monday.

When interviewing the police, the 18-year-old woman referred to her son as “that.” While the baby’s grandmother said she was not aware of her daughter’s pregnancy. After speaking with the women, the authorities executed a search warrant at the family’s home and seized physical evidence, including bloody clothing.

Avila was released from jail after posting an unsecured bond of $ 10,000 less than two hours after your arrest. She will be prosecuted later in Lea County District Court.

District Attorney Dianna Luce explained that Alexis Ávila could face up to 15 years in prison, according to the charges that are finally presented.