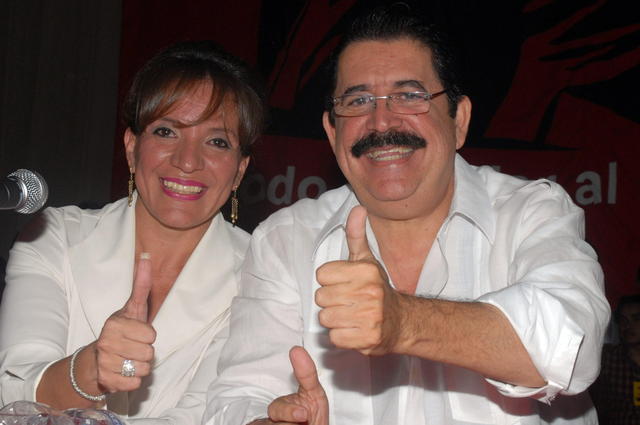 Honduran leaders based in Los Angeles expressed their hope for a change in their country of origin, as the opposition candidate, Xiomara Castro, is on the way to being the first president of Honduras. At the close of the election, he was victorious by a margin of 20 points over his rival Nasry Asfura of the ruling National Party.

12 years ago, her husband Manuel Zelaya was removed from power through a military coup. Xiomara Castro became a candidate with the promise of empowering the people and putting forward the demands of social movements and the memory of the martyrs of the resistance.

Here are some reactions from the Honduran community in Southern California.

The people couldn’t take it anymore

“Thank God that Xiomara won because the people wanted a change,” exclaimed Cecilia Rodríguez from the Los Angeles Honduran Alliance.

He added that the Honduran people can no longer put up with what they are experiencing.

“There are no sources of work or medicine in the hospitals; people die in hospitals ”.

So he said they hope the new president will do something good for the people of Honduras.

He made it clear that he is going to move heaven and earth so that they send a good representation to the Consulate of Honduras in Los Angeles because they have not had it until now. “

“Consul María Fernanda Rivera closed the doors to organizations and we were unable to work with her. That is not right. We are all Hondurans and we must work together for the well-being of our community ”.

It has been 35 years since Rodríguez emigrated to the United States and has been a leader for 23 years.

“It is not that I want to get involved in the politics of Honduras, but since I am a leader of a Honduran organization and all the complaints of Hondurans fall on me, they tell me that they were fed up with the corruption on the part of the Honduran government. ; and I am obliged to fight for my fellow citizens ”.

She admitted to being happy for Castro’s triumph. “I ask God that I can rule a destroyed country. The current president Juan Orlando Hernández only looked out for himself, his family and the drug traffickers. His brother Antonio “Tony” Hernández, was sentenced to life imprisonment for drug trafficking in the United States”.

There is so much corruption in Honduras, he said, that the first thing they ask you when you get to the airport is that you give them $ 50 not to check the suitcase.

And he regretted that Hondurans have not been able to vote from abroad.

“Here in Los Angeles, nobody voted. They did not take us into account even though we already spent half a million dollars in remittances ”.

Leoncio Velázquez, leader of the United Honduran organization in Los Angeles, expressed his desire for a change in Honduras because he said that Hondurans are already tired of the same government.

Velázquez said that he has seen many single mothers emigrate with their children, but most are young people between 16 and 28 years old. “They say they have no other way out than to emigrate.”

He immigrated to the United States in 1981 when he was 20 years old, in search of a better life.

Martín Pineda was born in the United States, but his parents are immigrants from Honduras, and he has a strong connection to his parents’ country. His partner also lives in Honduras.

“Xiomara Castro has an advantage of like 20%, and it is very difficult for him to come back.”

He said that during the last 12 years, after the military coup, the people have suffered greatly.

Therefore, he considered that in the elections this Sunday in Honduras, a punishment vote was cast against the National Party that in recent years has disappointed many people.

“When the coup happened, on June 28, 2009, I was 18 years old. Over time I learned about the situation that prevailed in Honduras.

So Pineda, a young millennial activist, has no doubt that broad youth participation made a difference in the election.

“I am very hopeful that the new president is going to be something different and can help. In the last 8 years, the largest migration to the United States has been from Venezuela, Haiti, and Honduras. A lot has to do with the lack of good jobs and violence”.

He anticipated that with Xiomara Castro there will be many changes that will benefit the people in general, not just those who work in the government.

Eric Midence, leader of the Honduran Association of Oxnard, California, said that for him, the triumph of Xiomara Castro has a bittersweet flavor.

“Sweet because a government that has Honduras on the streets is leaving, but sour because I am worried that Xiomara will lead the country towards communism. We already had the experience with her husband Celaya, who was a friend of Hugo Chávez, and was leading Honduras to the left. And that’s why the coup came ”.

But Midence indicated that because Castro’s triumph is the product of an alliance of parties, he hopes that a center government will be achieved. “The presence of Salvador Nasralla as vice president can prevent the country from going to communism, which is a cancer that is killing us”.

He affirmed that Honduras needs to get away from the radical parties because they do not want another Venezuela in Honduras.

“I remain cautious because Maduro (the president of Venezuela) sent her congratulations, and she thanked him.”

A voice from Honduras

Andrés Hernández from Radio Progreso in Hondruas said that Xiomara’s triumph is celebrated by the majority of the Honduran people. “It is a very numerous victory. More than 60% of the vote has been counted, and Xiomara leads National Party contender Nasry Asfura by 20%. “

Then, Hernández said that the election of Xiomara Castro, who is the virtual president of Honduras, was a huge joy, although there is still no statement from the National Electoral Council, which is the body that governs the elections.

Regarding the hopes placed on Xiomara Castro, he said that they could not be naive because it is not that he has a magic wand either.

“Honduras has a very deep socio-political crisis, a society totally hit in the economy, violence, the issue of drugs, migration”.

Therefore, he pointed out that it will take a long time, but his triumph is a light at the end of the tunnel to alleviate the crisis that the country has experienced in the 12 years that they have been managed by the National Party.

On migration, he said that the type of policies from within that the government of the alliance of political forces led by Xiomara Castro will play an important role.

“It is the way they treat the issues that originate migration such as unemployment, one of the most serious problems facing Honduras.”

He cited as an example that of every 60,000 young people who graduate from high school, only about 5,000 achieve a moderate employment. “The rest have no options and do nothing. Most of them leave for the United States. “

In that sense, he argued that Xiomara Castro, together with the other parties, will have to organize a management that mitigates the internal crisis, unemployment, education because there is a lot of school dropout, and then people will regain faith, the desire to believe in the country, stay there and not go to the United States

“The change of air that we are going to have from January 2022, without a doubt that gives hope to this town.”

But above all he emphasized that the vote was marked by the youth.

“Without a doubt, a large part of the responsibility for this triumph lies with the 20-year-old boys who grew up with the coup in 2009 and the constant coups of nationalist governments during this decade, and that led to a generation of conscience. that in the long run had an effect on the polls, with the overwhelming triumph. And these guys are the ones who are celebrating in the street ”.