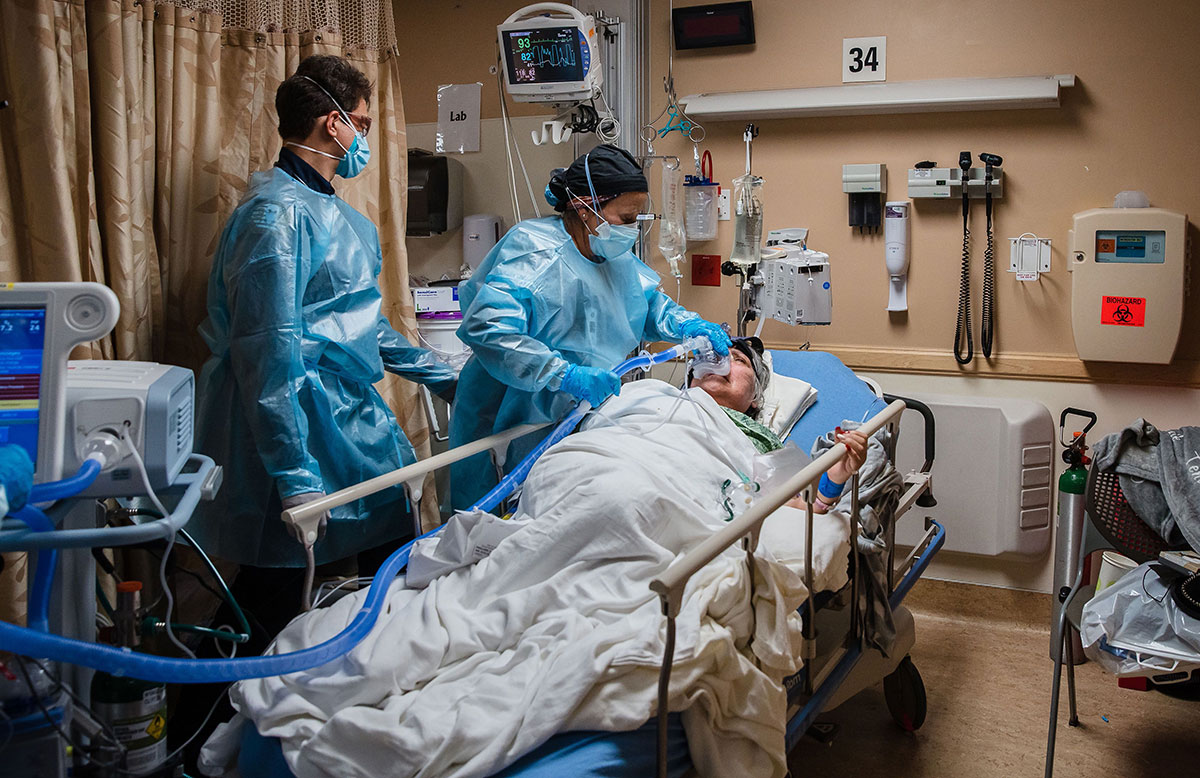 Optimism about the effectiveness of vaccines has given rise to alarm in the United States, which is seeing hospital admissions return to last winter’s levels due to the expansion of the Delta variant and the stalling of the immunization campaign against COVID-19.

As of this Tuesday there are 55,767 patients hospitalized for the disease in US centers, after the 50,000 barrier was surpassed on Monday, a figure not seen since late February, according to the Department of Health and Human Services (HHS).

In fact, the numbers of the last two days are triple those of a month ago, when there were about 16,000 COVID-19 patients admitted to US healthcare facilities.

The data for Monday and Tuesday assume an occupation of more than 7.7% of the total hospital beds in the country, although the situation is uneven depending on the state.

According to the HHS, the place in the United States with the highest occupancy percentage is Florida, the current epicenter of the country’s pandemic, where more than 25% of beds are occupied by COVID-19 patients.

In fact, this Tuesday a new record was broken in Florida with 11,515 people admitted, of which 2,400 are in intensive care.

Although the outlook is dramatic in that state, the governor, Republican Ron DeSantis, tried on Tuesday to minimize the rebound in the pandemic and reiterated that he will not take measures such as ordering the use of masks.

Experts attribute this new wave of the pandemic in the US to the expansion of the Delta variant, the stagnation of vaccination and the reluctance in some areas to adopt preventive measures such as the use of masks, which has become politicized in the country.

Given these prospects, the director of the National Institutes of Health (NIH, in English), Dr. Francis Collins, said Tuesday in an interview with CNN that it may not be possible to achieve herd immunity.

“Maybe the idea of ​​making 80% of people unable to harbor the virus is not possible, with the (circulation) of the delta variant,” said the scientist.

Even so, he insisted that being fully vaccinated is the only way to “mitigate the pandemic.”

“If you are vaccinated, the probability of being infected and of spreading the virus is greatly reduced,” he said.

Currently, at least one dose of the COVID vaccine has been administered to more than 191.8 million people in the US, or 57.8% of the population, compared to the 164.9 million -49.7% – who have received the complete scheme.

On Monday, the United States reached 70% of its adult population with at least one dose of the vaccine, a month after President Joe Biden‘s target date.

That is precisely why the White House defends that “the time has come” to extend the obligations to get vaccinated, something that the federal government has already done with its employees and is also considering applying it to the Armed Forces.

Within the framework of these measures The Mayor of New York, Bill de Blasio, announced this Tuesday that he will require proof of vaccination from anyone who wants to eat inside a restaurant, enter a concert hall or use a gym, among others.

“People are going to receive a very clear message: if you want to participate fully in our society, you have to get vaccinated,” De Blasio said at a press conference, in which he underlined the importance of more citizens taking this step given the progress of the delta variant of the virus.

New York is the first city in the United States to announce this type of requirement., which seeks to give a new impetus to the immunization campaign, which has slowed down in recent months due to the reluctance of many citizens to get vaccinated.

Such is the situation that some of the country’s media are talking about the country having millions of doses that will possibly expire before the end of the summer without being used.

In this context, the White House reported on Tuesday that the US has donated more than 110 million doses to more than 60 countries, including some Latin Americans such as Argentina, Bolivia, Colombia and Ecuador.

Back in June, Biden pledged to deliver at least 80 million vaccines to other nations, and said he would continue to share doses as long as possible.

The shared vaccines are approved for internal use in the US – those from Moderna, Pfizer and Johnson & Johnson – and are in addition to another 60 million doses that the US already donated in May from AstraZeneca, which has yet to received the go-ahead from US regulators.

Read on: US raises doses of COVID-19 vaccines donated to other countries to more than 110 million