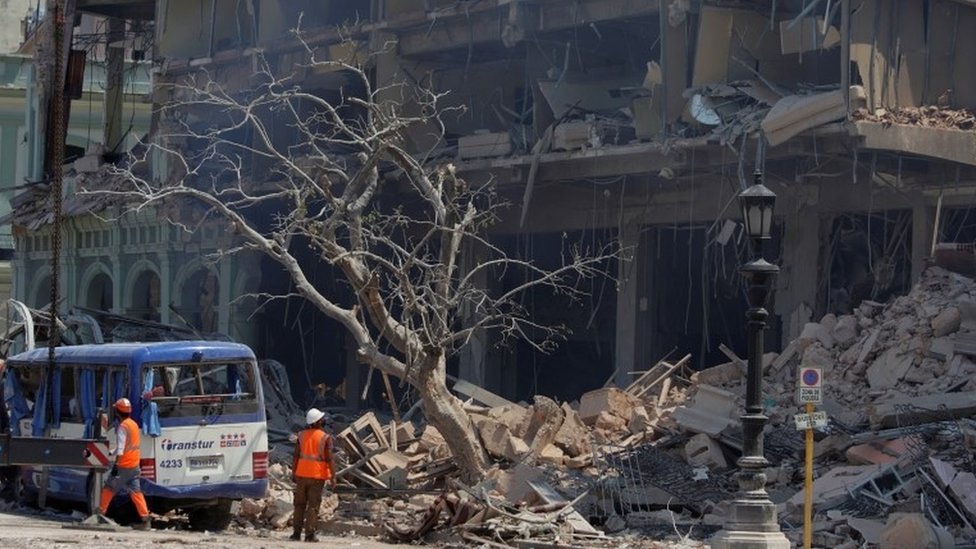 At least 18 people died and more than 60 were injured this Friday after a strong explosion that caused extensive damage to the Saratoga hotel, one of the most expensive and exclusive in the Cuban capital, authorities confirmed.

Government data indicates that of the deceased, 17 are adults and one is a minor, while there are another 14 minors hospitalized.

Another 13 people are missing and rescue teams continue the search and rescue tasks because, according to the official newspaper Granma, it is possible that there is a greater number of Cubans under the rubble.

According to the Presidency of the island “Preliminary investigations indicate that the explosion was caused by a gas leak”.

Medical sources told local media that the health system in the capital was fully activated and that the injured, some of them children, were taken to different hospitals, some in “critical condition” and in need of surgery.

President @DiazCanelB He is at the Saratoga Hotel, where a strong explosion occurred this afternoon.

He is accompanied by the Prime Minister @MMarreroCruz and the president of the @AsambleaCubaEsteban Lazo. pic.twitter.com/mInh8FJIca

The governor of Havana, Reinaldo García Zapata, reported that at the time of the explosion the hotel was undergoing repairs, so not there were tourists in the facility.

A primary school opposite the hotel was evacuated after the explosion.

Tourism authorities planned to reopen the Saratoga next week, after being closed for several years due to the coronavirus pandemic, which has hit the island’s tourism sector, one of the country’s main sources of income, hard.

Sulma Rodríguez, a resident of Centro Habana, close to the scene of the events, told BBC Mundo that shortly before 11:00 AM (local time) this Friday a “very strong noise” was heard and then a “ball of smoke” towards the Capitol area (the hotel is located nearby).

“When I arrived [al lugar de la explosión] they had already closed the street because it was [el presidente Miguel Díaz] Canel, but everything looked full of debris, including several cars and guaguas (buses),” he said.

“They are asking people to donate blood and they are taking the wounded to various hospitals because there are many. Ambulances and police cars are heard going by,” she added.

The official Cubadebate site reported that the emergency teams went to the place and closed several accesses in nearby streets “because there is a danger that the structure will collapse.”

Images on social networks show that several buildings in the vicinity of the hotel were also affected by the explosionwhich even felled some trees.

The front and side facades of the first floors of the hotel were practically destroyed, although the building did not collapse.

What is known about the causes?

Authorities indicated that preliminary reports indicate to a gas leak.

“In no case has it been a bomb or an attack, as international media have already come out in a very perverse way to confuse and misrepresent. It was simply an unfortunate accident, very unfortunate, and it seems that it is around the gas bullet,” said the president, Miguel Díaz-Canel, who visited the site of the explosion.

Then on Twitter, the president indicated that it was “the accidental explosion of a gas tank (…) that caused a large part of the facility to collapse.”

The secretary of the Communist Party in Havana, Luis Antonio Torres Iríbar, confirmed that “we are talking about an accident” of which “the causes are being investigated.”

For his part, the mayor of the Old Havana municipality, Alexis Acosta, told local media that “a liquefied gas bullet was being set up in the hotel” at the time of the explosion.

“The cook smells gas, checks the connections and discovers that there was a crack in the supply hose. That was what caused the explosion,” he said.

Initially, the state media had pointed to the “transfer of liquefied gas from a truck” to the hotel.

The Cubadebate site reported on Friday afternoon that the authorities had “evacuated a liquefied gas truck from inside the Hotel Saratoga” hours after the explosion.

The tanker truck of the state-owned Liquefied Gas Company had a capacity of 12,300 liters, although it had previously carried out a service and arrived at the hotel with about 11,300 liters, according to state television.

The vehicle was pulled out of the rubble without exploding.

#Cuba Thanks to the intense and detailed work carried out for hours, it is finally possible to extract the vehicle of the Cuban Gas Company that at the time of the explosion supplied the facility. It has been an action with many risks but it will allow us to speed up other actions pic.twitter.com/EblozeM4N8

The state-owned company Cuba Petróleo reported that after hearing about the accident, it created an investigative commission “to evaluate the events and their causes.”

What is known about the victims?

The Cuban Ministry of Tourism reported that “after a preliminary report,” most of the deceased and injured were Saratoga workers, who were preparing the hotel for its reopening.

The injured were transferred to several hospitals and the authorities called on the population to make blood donations.

The provincial director of Education reported that five students were injured, three of them from a primary school that is in front of the hotel.

The Ministry of Health reported that a child had to undergo emergency surgery for a skull fracture and that an adult required an amputation.

State media confirmed that there were several people trapped under the rubble.

A journalist from Granma told from the scene that “the most dramatic thing is knowing that there are people trapped alive, and that rescuing them involves moving each piece of debris with millimeter precision.”

It is unknown how many people were inside the Saratoga at the time of the accident or how many were circulating nearby, but the area is one of the busiest in the capital, close to bus and taxi stops and very close to the Capitol of Havana, the Paseo del Prado and other tourist attractions.

The Ministry of Health reported that it will offer more details about the victims on Friday night.

What was the importance of the hotel?

Originally built in 1880 for warehouses, residences and guest houses, the neoclassical Saratoga became a hotel in 1933 and then, like many buildings in Havana, was abandoned and in ruins.

It was like this for years before being restored by a British company after the fall of the Soviet Union.

It was reused as a five-star hotel in 2005 and has since become one of the most luxurious in Havana.

According to local media reports during its reopening almost 20 years ago, the hotel was “conceived for a high-level segment, businessmen and honeymooners. This last feature makes it exclusive within the range of city hotels in the historic center”.

With its neoclassical style facade, with French windows, mahogany shutters and wrought iron balconies, it was one of the favorite places for many celebrities who visited Havana, due to its location between the center and the historic part of the capital (all its rooms were suites).

It was the place where Beyoncé, Jay Z or Madonna stayed during their visits to Havana after the thaw in relations between Cuba and the United States during the government of Barack Obama.

It is unclear at the moment how the accident will affect the island’s tourism industry, which is seeking to recover from the impact of the coronavirus.

This week the government celebrates the International Tourism Fair in Veradero, with the aim of drawing the market’s attention to the island.

Cuba expects to receive some 2.5 million tourists this year, according to the Ministry of Economy and Planning.