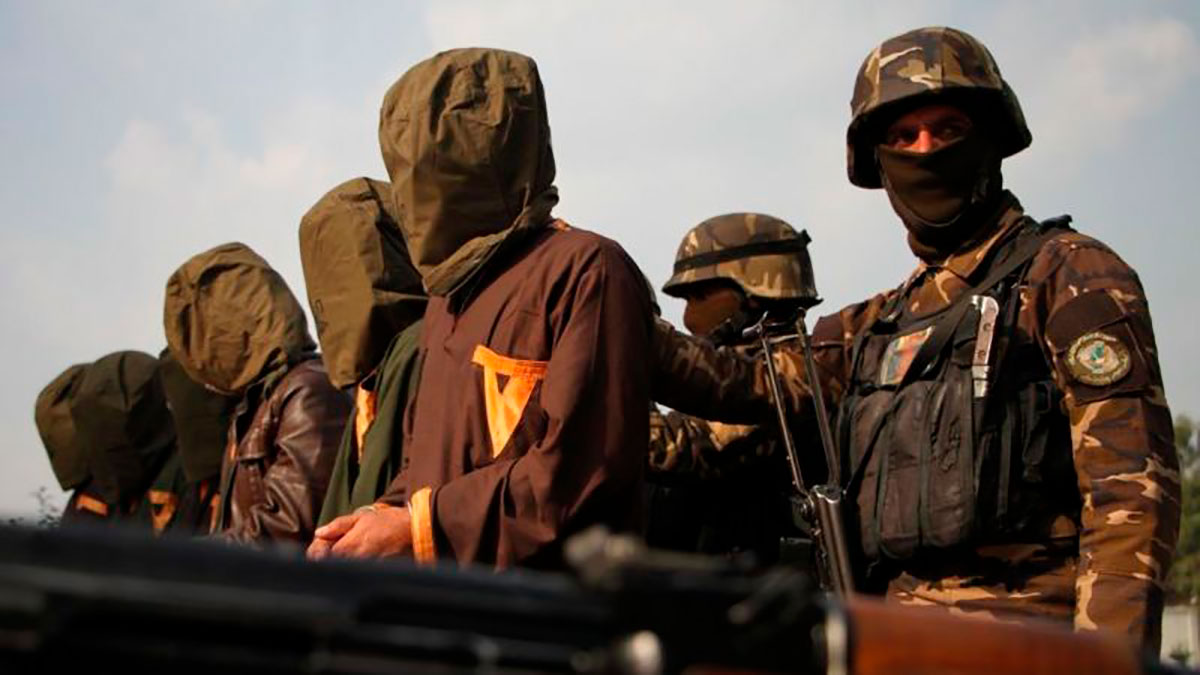 Three extremist groups coexist in a convulsive power game in Afghanistan: the Taliban, al Qaeda and the Islamic State.

Following the departure of Western forces and the rise of the Taliban to power, experts fear a possible new era of jihadism in the Middle East and Central Asia.

Al Qaeda and the Islamic State (IS) may have been weakened in recent years, but they are still active and could now be strengthened.

They share a fundamentalist ideology Like the Taliban, but these three groups have different aspirations and methods.

“The Taliban are the most significant player in Afghanistan. Al Qaeda is a transnational jihadist group that seeks to rebuild its networks. Islamic State too, but it will have an uphill battle given that He is a mortal enemy of both al Qaeda and the Taliban“Sums up Colin Clarke, researcher and security analyst at the Soufan Center in New York.

At BBC Mundo we explain the most important differences.

Al Qaeda and the Taliban emerged in the resistance against the soviet invasion in the late 1980s and internal disputes Afghanistan in the early 1990s.

Islamic State emerged years later, from Iraqi soldiers and the al Qaeda franchise in Iraq. during the American invasion in 2003.

Al Qaeda was founded by the Saudi millionaire Osama Bin Laden at the end of the 80s. In Spanish, it means “The Base” or “The Network”, and it served precisely as a network of logistical and arms support to the Muslims who fought against the Soviet Union. .

For this he recruited individuals from all over the Islamic world.

After the Soviets had been defeated, a group of ethnic Pashtun warriors and students in northern Pakistan and southern Afghanistan, known as the Taliban, became increasingly popular.

They promised to restore peace and security to Afghanistan and its austere version of sharia, Islamic law, once in power.

By then, al Qaeda was already much more than a logistical support network. Had become a jihadist organization of global claims. And the Taliban regime, out of gratitude and in exchange for funding, welcomed them to Afghanistan.

The al Qaeda faction in Iraq was a direct precursor of the Islamic State and a leading actor in the resistance against foreign forces since 2003, when the US invaded the country.

In 2006, al Qaeda in Iraq incorporated other extremist groups and adopted the name of the Islamic State of Iraq, aspiring to compete against the original ideas of al Qaeda and to become the universal leader of Islamism.

After 2011, when Islamic State penetrated Syria and gained more and more power in the civil war, it called itself Islamic State of Iraq and I raised, he proclaimed himself a caliphate and definitively distanced himself from al Qaeda.

Experts consulted by BBC Mundo indicate that the Taliban, al Qaeda and the Islamic State share a warlike and extremist vision of their religion.

Furthermore, all three practice the Sunni branch of Islam, a stricter interpretation of principles than Shi’ism, the other branch. Many conflicts between Muslim countries have their origin in this division.

“They believe that violence, in the name of faith, is justified, that it is a duty and whoever does not fight is a bad Muslim,” says Michele Groppi, a researcher at the International Order at King’s College in London, to the BBC.

“All three groups believe that social and political life cannot be separated from religious life“, He adds.

“Like the Bible, the Qur’an has hard, very strong verses. But the vast majority of Muslims, in general, reject these violent principles. They say that they were valid at the beginning of the faith, when it was threatened. The jihad, the holy war, made sense then ”, says the researcher.

However, the degree of extremism among the three groups varies according to their goals. Experts place the biggest difference here.

The Taliban intends to introduce Sharia law in Afghanistan. The last time he did, he put in place a strict regime, especially against women.

Faced with the memory of the Taliban experience between 1996 and 2001, many Afghans have fled the country en masse in recent weeks, fearing that now that they are in power, history will repeat itself.

Even so, “the teachings of the Taliban are less radical compared to to the Qaeda and Islamic State. They intend to restore Afghanistan through an idealized Muslim past, ”Daniel Byman, an expert on terrorism and the Middle East at Georgetown University in Washington DC, United States, explains to BBC Mundo.

“The big difference is that while tol Qaeda and Islamic State have international aspirations, the Taliban do not intend to change other Muslim countries. They focus only on Afghanistan, ”says Byman.

Ironically, al Qaeda and the Islamic State coincide in their ultimate goal of creating a caliphate. In other words, a process for the election of the religious and political leader of all Muslims in the world where the laws of Islam exclusively prevail.

“But they differ in that while IS wants to create a caliphate now, al Qaeda thinks it is too early. He considers that the jihadist community and Muslim societies are not prepared. It’s not their priority, ”adds Byman.

The Taliban, al Qaeda and the Islamic State share a distant enemy: the United States and the West.

“They also have close enemies, those they consider apostates, which are the governments that support the United States and the West or those that have rejected the more religious vision of Islam and have opted for the division between the state and the church, a common foundation in Western societies ”, says Groppi to BBC Mundo.

Examples of these apostate governments would be Iran or Syria, although such enmities are sometimes questioned. The US has denounced on more than one possible occasion cooperations between the Shiite government of Iran and the Sunni group tol Qaeda.

“From the beginning, the Islamic State was more violent than al Qaeda and carried out, in addition to a war against the West, a sectarian struggle against other Muslims who did not share its ideology,” says Byman.

In fact, the expert specifies that the main enemy of al Qaeda continues to be the US, while IS is prioritizing attacking Shiite communities and other minority religious factions within the Middle East.

“To the QAeda also considers the cDaughters like apostates but you think killing them is too extreme, a waste of resources and detrimental to the jihadist project, ”says Byman.

The IS, on the other hand, is also an enemy of the Taliban, which it sees as a “traitor for negotiating with the United States,” explains Groppi.

However, peripherally they are connected to the Taliban through a third group.

According to the researchers, there are strong links between the IS faction in Afghanistan and the so-called Haqqani network, which in turn is closely linked to the Taliban.

In short, in the fight for jihadist leadership, IS has several open fronts. Among them, against the Taliban in Afghanistan and against Al Qaeda globally since they broke ties in 2014.

To combat the United States, al Qaeda has used dramatic and high-impact attacks such as those of 9/11 in New York, to activate the Muslim world and intimidate Washington into withdrawing from its lands, especially Saudi Arabia and its places. sacred.

It also launches propaganda campaigns to convince Muslims that jihad is their obligation and that Al Qaeda’s objectives take priority over local ones.

“Islamic State also fights those arguments, but with a much more violent approach. They ambition to control territory, consolidate and expand their position to create a government where Muslims live under their interpretation of Muslim law, ”Byman explains.

“For IS, terrorism is part of the revolutionary war. In controlled territories, they held mass executions, public beheadings and rapes. They sought to terrorize the population in order to subdue it. Al Qaeda, if possible, has a somewhat gentler approach ”, adds the expert.

ISIS’s expansionist campaign led it to control vast territories in Iraq and Syria, with a peak between 2014 and 2017.

In recent years they suffered bloody defeats and lost much of their gains to Western and Syrian forces, the latter with Russian support.

However, in Afghanistan a faction called Islamic State of Greater Khorasan, which now sows fear and attacks minority populations and ethnic groups in the country and last Thursday staged a suicide attack in the vicinity of the Kabul airport, killing nearly 200 people.

For its part, the Taliban have used war tactics and attacks against the Afghan government and security forces in recent weeks, prioritizing the capture of major cities until finally taking over Kabul, the capital.

As he captured provinces, Locals have reported executions of Afghan soldiers and imposition of punishments and restrictions, especially women.

However, Groppi tells BBC Mundo that, despite the use of force, “the Taliban advance is also explained in a propaganda campaign in which they have managed to convince the population, especially rural people, that they are the solution to many problems. of the country, especially corruption ”.

The Taliban, al Qaeda and the Islamic State have used local recruits that they manage to convince for their respective causes.

They influence the need for jihad, the fight, to save and “purify” their religion.

However, the global pretensions of al Qaeda and the Islamic State have also led them to incorporate effective beyond the Middle East.

“In this, EI has been the most successful. Capitalized on the power of the internet. In Iraq and Syria it had a lot of brand strength: a flag, a territory, practically a state, ”says Groppi.

“EI’s social media efforts have been impressive and managed to better mobilize individuals in the West who, having little or no contact with the organization and not having been able to travel to Syria or Iraq, planRon attacks within their own countriesByman explains.

Among them, the notorious attacks in Paris in 2015, where IS militants (some had been in combat zones) killed 130 people, considered the largest peacetime atrocity in decades.