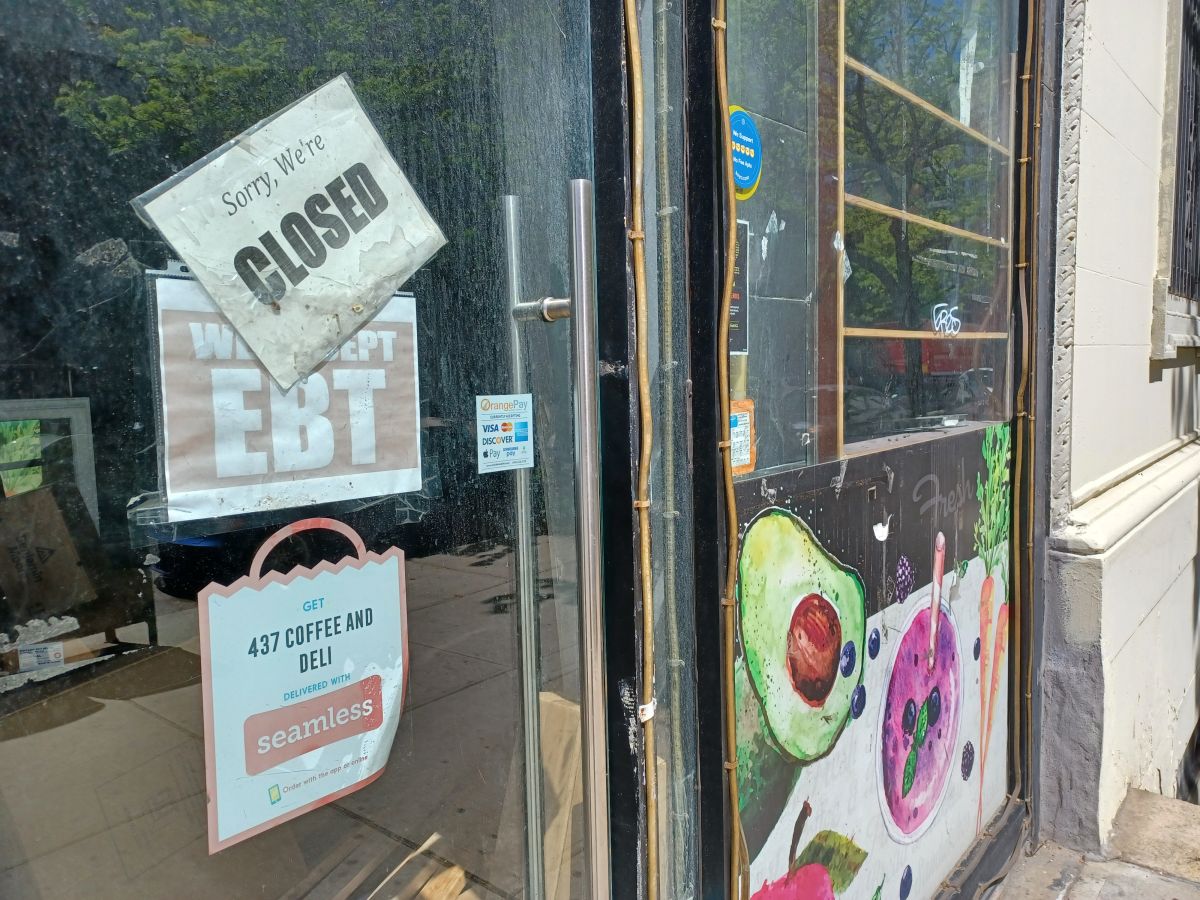 Other businesses considered as traditional “institutions” of the New York streets, like the yellow taxis, are facing the threat of being displaced by new technologies.

But this time, the “threatened” are not about to back away easily.

It is about thousands of winemakers from the Big Apple who announce that this spring they will continue to speak louder to the City authorities about the proliferation, without pause, of the so-called “dark stores”installed by new technological applicationswhich offer, among other services, the home delivery of merchandise in a matter of 15 minutes and “gifts” to those who subscribe to its services.

A business model based on ‘apps’, which according to the opinion of merchants consulted, “will destroy” gradually to small wineries and neighborhood delis, as envisioned.

“It has already happened with the digital order taxi applications, which brought down the yellow taxi drivers who are a symbol of this city. We are not opposed to technology. We support development. As entrepreneurs we want to update ourselves and grow with these applications. But, what we cannot allow is that they take us out of the game, with their own illegally set up warehouses, highlighted Francis Mars, president of the NYC Association of Wineries and Small Businesses (BSBG)

This union, since the last quarter of 2021, has denounced that through digital order applications such as Buyk, Fridge No More, Gorillas, Getir and Jokr that entered the New York market between 2020 and 2021, the distributors are supplied in almost clandestine mini-distribution centers, which are already called “dark stores”, which have not stopped being installed in the five boroughs.

“We want to stress to New York’s elected leaders that they must prevent a business sector vital to this city from disappearing entirely. We were essential during the pandemic. We are trying to recover. Our goal is very clear: that it be legislated so that our small winemakers are the source of supply of the products that these ‘apps’ distribute. Not these illegal warehouses,” Marte reiterated.

Specifically, different associations of small businesses agree that they will not let the members of the Municipal Council rest to demand laws that put more retaining walls to these warehouses. They will also promote initiatives that allow them to be included in the unstoppable growth of digital commerce in the city.

The City sets the first limit

The anguish of the winemakers, until now, has had the support of both the City and some legislators.

Specifically, recently, the New York City Department of Buildings (BOE) shared with local media a more specific guide about how these technological applications can continue to operate.

Everything indicates that the City will only allow these warehouses, which eventually are nothing more than warehouses, as long as the shoppers can enter, pick up items, without the need to download an app first.

Businesses that do not allow shoppers to enter the store and purchase products on site should be located in special zoning areas of the city, where manufacturing companies are located. This puts merchandise warehouses that are not open to the public, but serve as a “pantry” for deliverers, on the line of illegality.

The BOE specified that any store windows that are hidden in “more than 50% with banners, paper, vinyl tint, and other opaque materialsthey may be committing violations of local laws.”

This dispute was ignited with another fuel: based on current resolutions of the local use of zoning, these warehouses are not compatible with residential and commercial neighborhoods.

According to what was commented by winemakers, even in rented apartments and basements began operating these distribution centersthat is why they have called it “dark stores”.

In this sense, the president of the Union of Winemakers of America (UBA), Radhames Rodriguez, It also proposes as an “emergency” that the City observe in more detail the effects that it can have on the battered local economy, that traditional commercial ventures that for decades have been a vital part of the neighborhoods begin to be “buryed.”

“We already have winemakers fighting over $50,000 in electricity bills, in addition to their fight against crime. Now, we must demand and unite so that technology does not destroy us. Rather help us grow. We are analyzing in detail how to prevent them from displacing us,” Rodríguez warned.

When these new services began to appear, which can be accessed from the comfort of a cell phone, the Councilor Gale Brewer even when she was president of the county of Manhattanset off the same alarm bells for at least 12,000 small businesses, the vast majority of which are immigrant family businesses.

“These very well financed start-ups, unfairly compete with wineries Family owned that have been in town for many years. We ask the City agencies to provide more clarity on what exactly these services are and what rules they are expected to follow”, the local legislator has insistently requested.

In a communication to various City agencies last October, Brewer highlighted that applications are using commercial spaces, at street level, to exclusively store items for delivery. And they are not open like a commercial establishment.

“These centers fall within the use group 16Dwhich is only allowed in certain areas in Manhattan, with zoning M1, M2, M3 and C8. However, they are operating in areas where such zoning does not apply. Besides, some of these establishments distribute beerwhich requires special licenses, which do not seem to be shown publicly”, argued the councilor in her letter.

Both spokespersons for the Union of Winemakers of America and the Association of Wineries and Small Businesses, assured this week that they trust that the elected leaders keep promoting other reviews to prevent an unfair competition scheme from ending up crushing their businesses.

“I cite an example. Restaurant food delivery apps appeared and made a huge contribution to those businesses. In this scheme everyone won. But in this case it is different, because they offer to take home products that they buy from us for years. !Perfect! That they offer that service, but that the milk, cereals and beers leave our warehouses”, suggested Francisco Marte, who since the 90s has been linked to this business in The Bronx.

The guild of these small merchants is open to working in coordination with the nascent technology companies, so that the “tradition, effort and history” of thousands of working class families are not wiped out.

“A winemaker, especially in the poorest neighborhoods, is an ally of the communities. Even many in their own blocks do ‘deliveries’, with limited resources, with their own staff, they take products to people who due to some emergency or eventuality cannot go out. This was further demonstrated during the pandemic,” he recalled. Radhamés Rodríguez leader of the UBA.

But on this path there are many interpretations. The Brazilian worker of a winery in Harlem, Samuel Baptista, with 15 years in the market, has a different position, which he summarizes in a single expression: “the world has changed, trade has changed and unfortunately if we do not adapt we will disappear. Clients like to have services at home. We as winemakers must ride that wave”.

For its part, Oralia Sacateldo, owner of Mexicana Deli Groceriin the Bronx, said he completely ignores the existence of these types of “dark stores,” but he does note that after the city’s public health emergency, the “recovery” of commercial vigor tends to be very slow.

another winemaker Dominican, Vicente Moreno, 60 years old, consulted in Washington Heights shares that he is investigating how to get on the technological platform.

“If we don’t find a way to mount ourselves, this river will drag us. More information, more technology, but we have to react. The world is not going to stop for us, ”she limited.

‘Apps’: “we do not compete with wineries”

In a statement shared with local media, James Walker, CEO of Buyk, one of the corporations that owns one of the shipping ‘apps’ that operate in the Big Apple, established its position stating that they are not competing with the warehouses, because they cover different customer needs.

“The wineries are an iconic part of New York City life. I myself am a frequent buyer of these establishments. When there’s time, there’s nothing like stopping by your local bodega for a hot sandwich and a chat with the owner. However, when there is no time to walk several blocks and return for a forgotten ingredient, then ultra-fast delivery is incredibly convenient,” Walker said.

Also a Gopuff company spokesperson fixed position pointing out that all its stores accept direct purchases from its customers.

“We look forward to continuing to provide New Yorkers with everyday essentials in person and through delivery and in partnership with the communities we serve.”

At one point there were more than 100 stores in the city, but in recent months several have closed, including Buyk and Fridge No Moreaccording to local journalistic versions, for being linked to Russian investors.

In this sense, the gorilla corporationThat operates 16 stores in New Yorktold CNBC television that the company complies with city zoning guidelines by allowing customers to enter its facilities and offering a place to wait for their order to be prepared and delivered in person.

“As a grocery delivery company, Gorillas understands and meets the requirements to be a retailer in the locations where we operate,” he said. Adam Wacenskechief of operations of this corporation.

Warehouses, warehouses and applications in NYC: