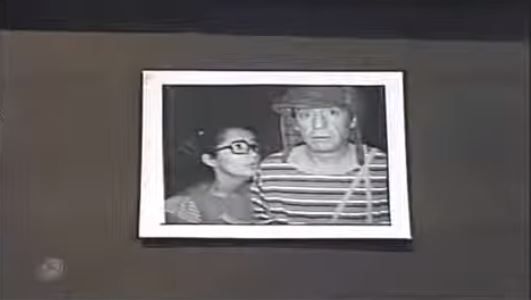 The Chavo del 8 is, surely, the most successful series by Roberto Gómez Bolaños, Chespirito. With a children’s theme, this show, which had more than 300 episodes, brought smiles to many homes in Latin America, but it also brought some tears due to the crude stories it reflected.

One of them was the day it arrived The kid to the neighborhood. This moment was captured in an episode of the series when Don Ramón and la Chilindrina show him an album of old photos. When turning the pages, they find an image of both children, so Don Ramón decides to tell the background of it.

According to his account, father and daughter were in the neighborhood yard to take some photos. When Don Ramón placed the camera and indicated to the Chilindrina where to position herself to get out in the best way, behind her appears a small man carrying a pole with a cloth tied to hold his belongings.

With a plaid hat, beige and torn pants. Striped shirt, used shoes and orange suspenders, the boy is placed in front of the character played by Marie Antoinette de las Nieves, who does not flinch.

Instantly, Ramón Valdés begins to yell at him to remove him from the photograph. Nevertheless, The kid He doesn’t say a single word and just stares at the man. After a few seconds The question. angry, “What do you have?”, to which his response generated millions of knots in the throat: “hunger”.

With a face full of consternation, Don Ramón offers him a ham cake. Hearing these words, the little one begins to make his iconic leap of excitement. Nevertheless, His happiness was stopped when he heard: “Where am I going to get a ham cake?”.

The scene is transformed to black and white and the camera transports the viewer back to the Chilindrina room, where they are looking at the photo album to remind The kid the day he arrived in the neighborhood.

Years later, Gómez Bolaños delved into the origin of his characters when he wrote the book The diary of El Chavo del ocho, published in 1995. Of course, the little protagonist could not be absent. In the pages, he developed the tragedies he went through to become the most beloved child on Mexican television in those years.

According to the text, The kid never knew his dad and has only few memories of his motherBecause he worked a lot and had to take him to a nursery every day because he could not take care of him.

The woman was going to pick up her child, although due to fatigue she sometimes did not realize which child was being handed over to her. Nevertheless, one day he never returned for his offspring, which is why he came to live in an orphanage.

In that place he met Mrs. Martina, who was always bad with children, a situation that filled the patience of The kid. One good day, between tears, She decided to confront her caregiver and told her that she would leave because of the injustices that everyone was experiencing. Immediately the woman went to the door and opened it.

For a long time he walked aimlessly, but one rainy day he took refuge in the familiar neighborhood to avoid getting wet. This would probably be the moment captured in the series, although with some differences.

Since that day, The kid He lives in that place, specifically in apartment number 8, where an elderly woman took him in, who told him that he reminded him of a grandson of his. Some time later, the woman died and the little boy left the house because a new tenant arrived.

Despite being orphaned again, his friends always invited him to stay at their houses to sleep. With this information, it was denied that he lived in the barrelHe only went there when he didn’t want to see anyone or was just looking for a bit of tranquility.

El Chavo del 8: what is the meaning of the show’s most iconic words

El Chavo del 8: this was the day when Chespirito fired Quico from the show

El Chavo del 8: who was the true protagonist of the series