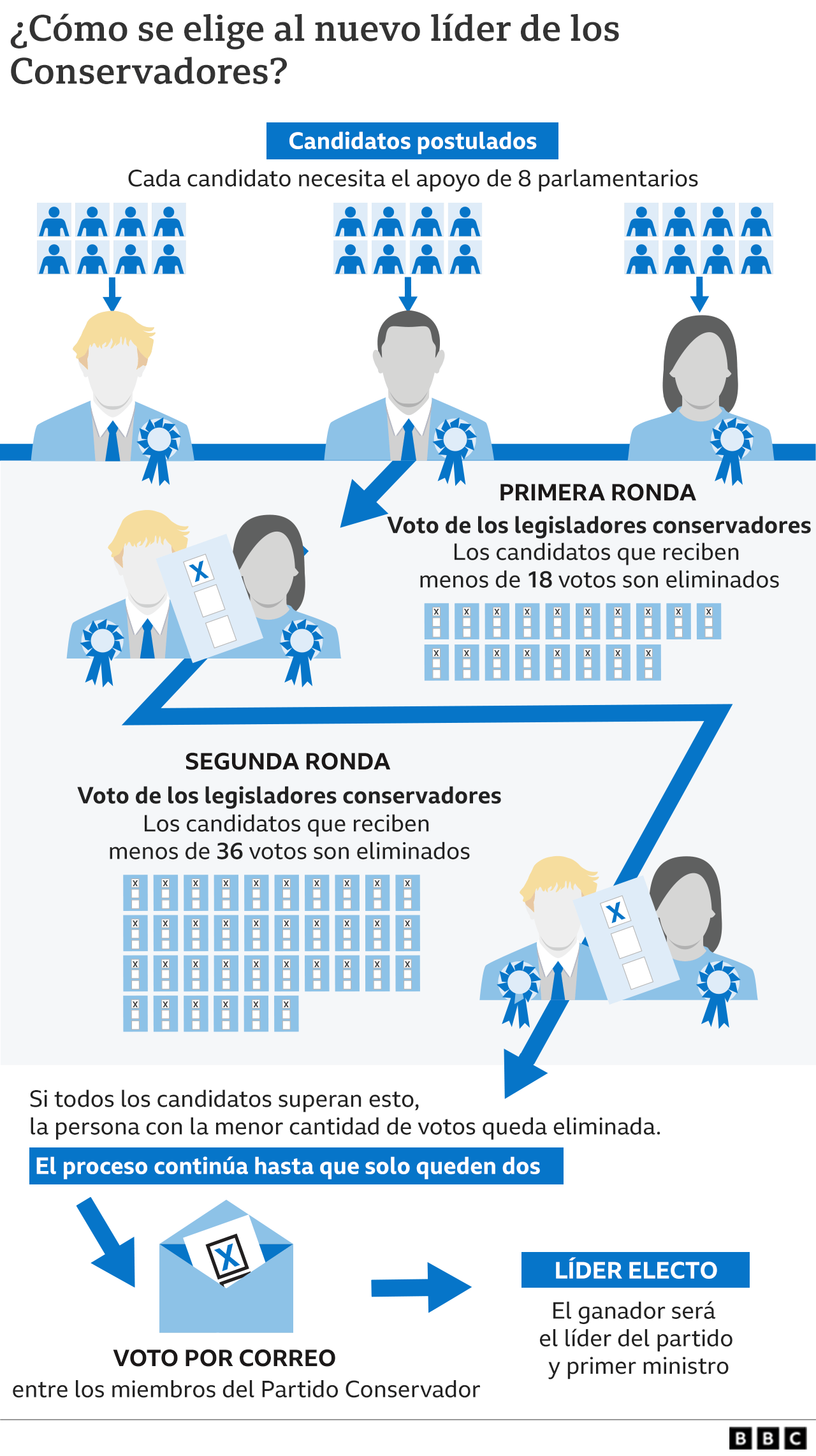 Facing enormous pressure over the unprecedented resignation of ministers and other government officials, Boris Johnson has stepped down as leader of the ruling Conservative Party and will step down as UK prime minister when a replacement is found.

Johnson will leave office less than three years after leading his party to a resounding electoral victory in 2019.

It is expected to continue operating about three more monthsuntil the conservatives choose his replacement in internal elections.

But how is it possible that with this decision made today it is not Johnson’s last day in office?

What happens in the UK is that until a successor is found, the outgoing prime minister is expected to continue in office. For this, an established process is followed.

Here we explain the system, what to expect from the process and what can happen next.

How do the Conservatives choose a new leader?

Once the leader of the Conservatives resigns, the process begins to elect a new party leader.

The timetable for the election is decided by the 1922 Committee, a powerful group of Conservatives that makes the party’s decisions.

Under current rules, candidates need the support of eight Conservative MPs to run.

When all candidates have declared their intentions – and if there are more than two candidates – Conservative MPs will hold a series of votes until only two remain.

When there are only two left, all members of the Conservative Party – just over 100,000 – will elect their leader. It is suggested that this will happen next fall.

How is the next prime minister appointed?

Whoever wins the race to lead the Conservatives will become leader of the party that currently holds the largest number of seats in Parliament.

There is no obvious successor to Johnson yet, but there are several potential candidates.

When that person is elected, Boris Johnson will offer his resignation to Queen Elizabeth II and she, in turn, will summon the new party leader whom she will ask to form a government.

Will there be general elections?

That a prime minister resigns does not imply automatic general elections.

The party and, therefore, its leader will be able to continue in government for the period for which he was originally elected.

That happened, for example, when David Cameron and Theresa May, both Conservatives and predecessors of Boris Johnson, resigned.

In the current case, after Johnson’s victory in 2019, the Conservative Party can stay in Downing Street, the seat of the British government, until January 2025.

But the new prime minister could call elections before then, at his convenience. That was what May and Johnson did at the time.

How much longer will Boris Johnson stay in power?

Johnson will continue as prime minister until the fall of this year, according to BBC correspondent Chris Mason.

If I wanted to resign immediately, in theory the queen could appoint an interim leaderprobably a cabinet member, to take the reins until a new party official is appointed.

However, that would be an unusual situation.

What powers does Boris Johnson still have left?

Until he formally steps down as prime minister, Johnson will wield the same powers, in theory.

In fact, does not now have the authority to introduce radical new policies.

He will continue to represent the UK abroad and will be able to continue to appoint public positions or make changes to his ministerial team.

One of his last acts in office will likely be to bestow honorary degrees and appoint members to the House of Lords, on his resignation honors list.