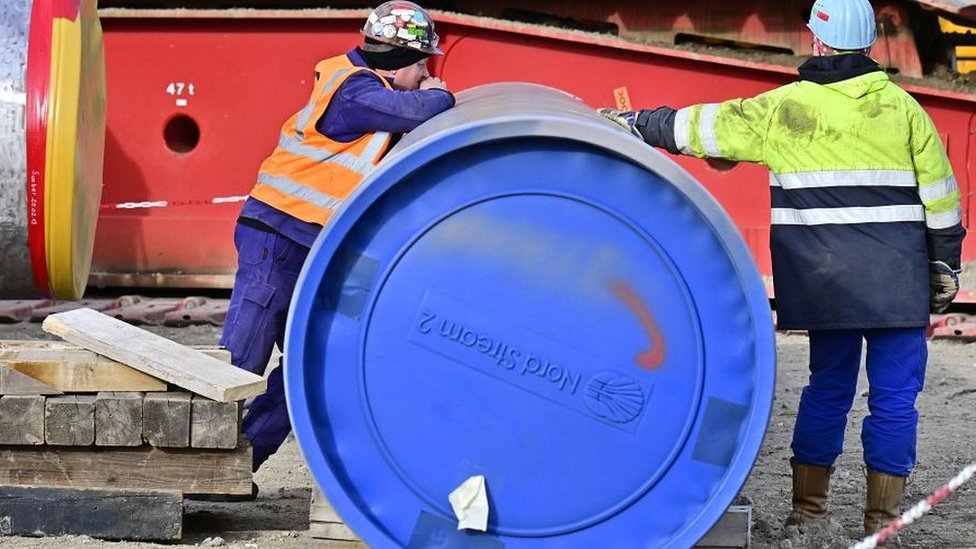 This Monday, an anonymous US source claimed that Russia had asked China for military help. Without referring directly to those statements, Beijing accused Washington of spreading “disinformation.” The remarks came shortly before a high-level meeting between the US and China. Cecilia Barría reviews here what the economic relationship between Moscow and Beijing implies.

The war in Ukraine is not only being fought on the battlefield.

The West has deployed economic artillery to try to suffocate the Russian economy, which is about to go into default or defaultas warned by the risk rating agency Fitch.

The battery of sanctions includes measures commercial, financial and energy.

Some of the sanctions imposed by the West include the prohibition of a large part of the banks to make or receive international transfers through the Swift global payment system, the limitation of access of banking entities to international credits and the paralysis of the assets of the Central Bank of Russia and some public and private banks.

To this is added the siege on the fortunes of Russian oligarchs and senators, the withdrawal of Western commercial companies or the suspension of operations in Russia of Visa, Mastercard and American Express.

Although the White House and the UK took a step further by announcing a blockade on Russian energy imports (with immediate effect in the case of Washington and progressive application in the case of London), one of the most painful sanctions for Moscow, experts point out, would be for Europe to impose a blockade of Russian natural gas, something that, until now, remains unlikely.

In fact, about 40% of the natural gas imported by the European Union and about 26% of its oil come from Russia. With that level of dependency, analysts consider that the bloc is quite handcuffed.

Thanks to the rise in the price of crude oil on international markets, Vladimir Putin continues to receive a permanent flow of funds into his fiscal coffers, despite the sanctions imposed by the United States and the United Kingdom, the scope of which has been considered by analysts to be limited.

But in addition, Russia and Ukraine, once called “the granary of Europe”, export more than a quarter of the global production of wheat and a fifth of that of corn, basic products whose price has gone through the roof.

It is in this context that the (political) link between Russia and China becomes relevant.

“Without a doubt, the cooperative relationship between Russia and China is energy and militaryAlicia García-Herrero, Asia-Pacific chief economist at the French investment bank Natixis, who has lived and worked in Hong Kong for almost two decades, tells BBC Mundo.

How much trade does Russia have with China?

Trade between China and Russia has grown rapidly. 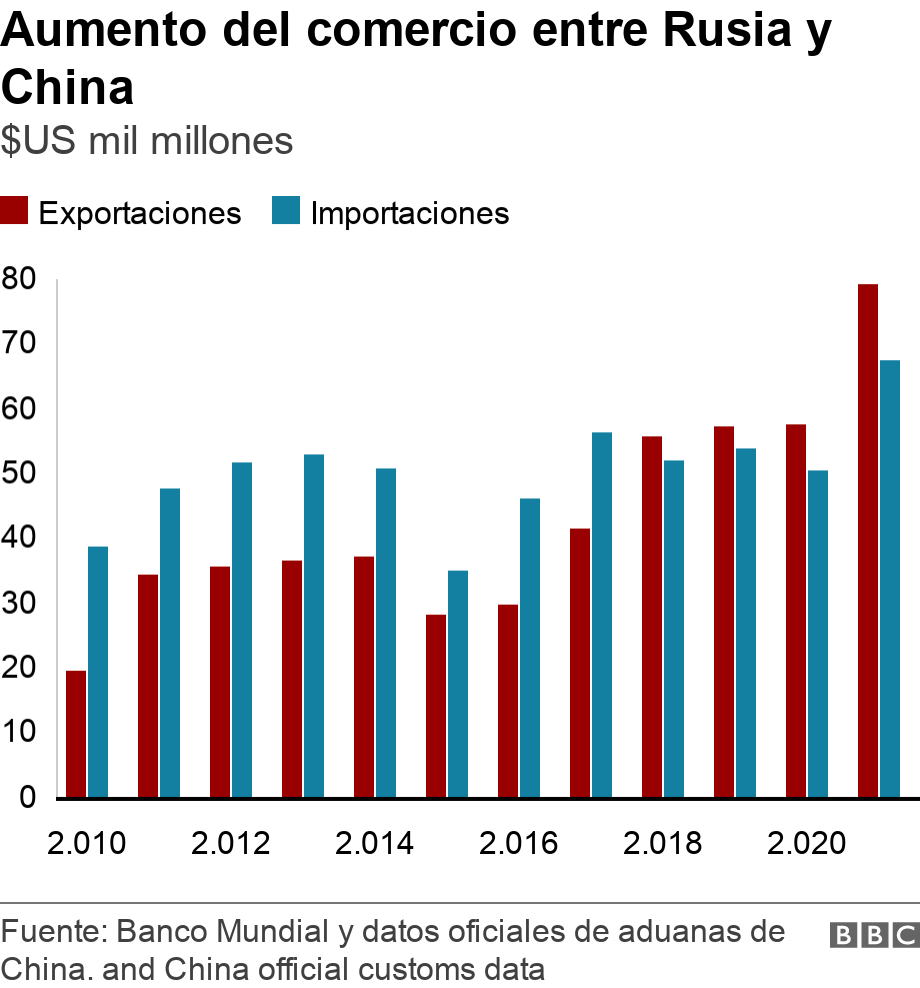 During President Putin’s visit to China last month, the two countries announced they would increase their trade to $250 billion by 2024, as well as sign long-term trade deals, especially in the energy sector.

And this week, Chinese Foreign Minister Wang Yi insisted that ties between the two countries remain “solid as a rock”.

“No matter how precarious and challenging the international situation is, China and Russia will maintain a strategic approach,” he said.

China is currently the largest market for Russian exportssuch as oil, gas, coal and agricultural products.

And it is clear that Russia has started to export much more to China in recent years.

However, the European Union, as a bloc, is by far Russia’s largest trading partner. In 2021, the total trade between the two was worth nearly twice as much as China’s trade with Russia. 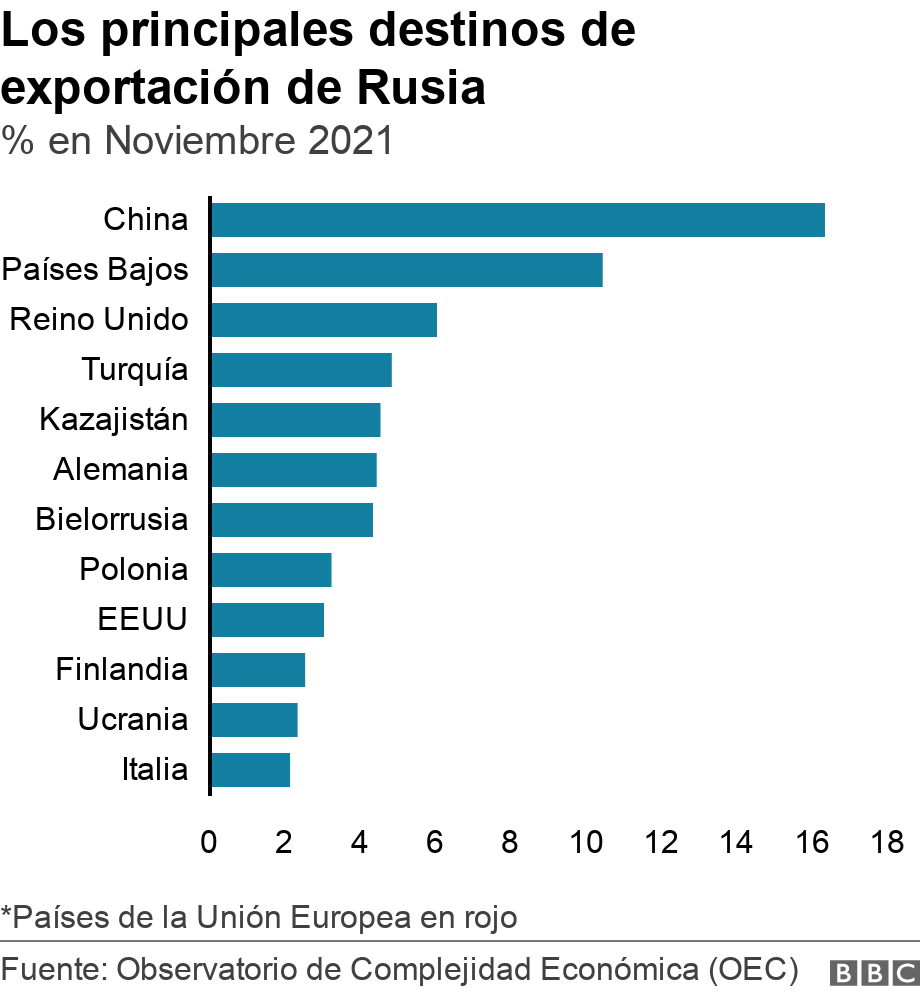 But with the war, the relationship between the Asian giant and Europe could take a turn.

“It is inevitable that trade between the European Union and China will decline in light of sanctions,” Rebecca Harding, an economist specializing in international trade and chief executive of consultancy Coriolis Technologies, told the BBC.

“The current crisis has just sharpened the focus within the European Union on the need to diversify supply.”

Russia’s economy is highly dependent on the export of oil and gas,

“Russian oil and gas exports to China have increased at a rate of more than 9% per year for the past five years. This is rapid growth, but still, China is half the size of the European Union market for Russian oil,” Harding explained.

In relation to oil, the latest data from the International Energy Agency (IEA) show that last year, China represented only 20% of exports From Russia. So while it is a major buyer, Russia’s crude exports are more diversified.

In the case of coal, China is the largest buyer of coal from Russia. In fact, the two countries signed a new agreement worth more than US$20 billion a week before the start of the conflict.

Can China economically save Russia?

“China is going to give Russia all the air it can because it is interested in not being defeated, but another thing is the amount of air that I can give you”, Juan Carlos Martínez, professor of Economics at the IE Business School, Spain, tells BBC Mundo.

China can buy more oil from Russia, he adds, but it is much more difficult for it to buy gas, since most of the exports are made through gas pipelines that go to Europe.

“chinto can relieve the Russian economy but no will save you”point.

On the other hand, supplies that may run through a new gas pipeline recently agreed between Russia and China (Power of Siberia 2) they would have only a fifth of the capacity of the Nord Stream 2 gas pipeline, whose entry into operations was blocked by Germany when the war began.

In the longer term, however, China may increase imports of Russian gas in an attempt to reduce its heavy reliance on coal.

In the food sector, Russia is the world’s largest exporter of wheat.

China used to restrict imports from certain areas of Russia due to health concerns. However, on the very day the war began, China’s customs authorities announced the lifting of all restrictions on Russian wheat and barley.

Trying decrease dependence on the western financial systemIn recent years, both countries have worked to develop their own alternative payment systems to SWIFT and reduce the use of the dollar.

Russia has been developing its Financial Message Transfer System (STFM), while China has the Cross-Border Interbank Payments System (CIPS), both of which operate in their own currencies.

But by 2021, only one Chinese bank had joined the Russian STFM, while on the other hand, some Russian banks and global financial institutions have partially connected to the Chinese system.

And a study published by the Carnegie Moscow Center argues that these local payment systems “are not an alternative to SWIFT“.

The plan to develop an alternative payment system that allows it to operate with greater autonomy from the global financial system is an aspiration that Beijing has had for years, but this still in very early developmentsay experts, which means that it is still many years away before it manages to work as a parallel option.

For now, only about 17% of trade between Russia and China uses the Chinese yuan, according to news reports citing official Russian statistics.

Business and politics often go hand in hand. From Hong Kong, the economist Alicia García-Herrero argues that the commercial relationship between Moscow and Beijing has become closer since Russia annexed the Ukrainian peninsula of Crimea to its territory in 2014.

“Before Crimea, the relationship between the two countries was almost non-existent”says the economist Alicia García-Herrero.

But from that moment, which marked one of the worst crises between Russia and the West since the Cold War, the commercial alliance between the two countries began to develop by leaps and bounds.

At that time they reached an agreement to build the “Power of Siberia 1” gas pipeline, financed by Beijing, with the aim of exporting Russian gas to China. “Putin understood that his future was in Asia,” he notes.

And they recently signed an agreement to extend the business through the construction of the gas pipeline “Power of Siberian 2″which when it comes into operation, will allow the connection between the Russian gas pipelines that go to Europe and that of China.

In addition to the energy security that China seeks by allying with Russia, she adds, it also seeks military security because “they are complementary things,” the analyst argues.

From that perspective, says García-Herrero, arms deals will also be on the table.

On the one hand, Russia does not want to become so dependent on China. But now that she is in the middle of a war in Ukraine, the analyst explains, she needs Beijing to be her business ally.

And from the point of view of Chinese interests, it is key for Moscow to be more economically dependent on Beijing “to ensure energy supply,” says the analyst.

On a more geopolitical level, the economic relationship between the two countries, García-Herrero believes, is based on the fact that they have a similar vision of what should be a new global order.

“They have a gentleman’s agreement: Russia becomes ‘Great Russia’ again and China consolidates its power.”

They are united by the vision of a world where the hegemony is China, but with a space for ‘the bulldog’ or the ‘barking dog’, which is what China calls Russia, in the sense that Russia contributes its nuclear power ”.

“As Russia barks, it increases its commercial dependence on China. And that suits Beijing.”.