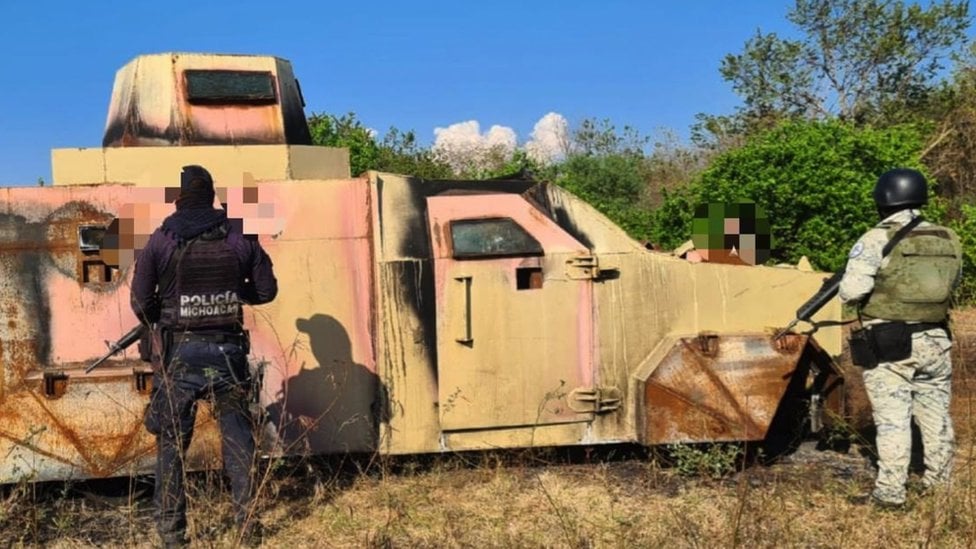 The death of a peasant in February, after stepping on a mine planted by drug traffickers in Aguililla, in western Mexico, raised alarms about the escalation of violence in an area already besieged for years by crossfire between rival groups.

The event in this municipality, a bastion of the Jalisco New Generation Cartel (CJNG) and where their leader Nemesio Oseguera Cervantes, el Mencho, was born, is far from being a punctual threat.

In about three weeks, the Mexican Army deactivated at least 250 homemade explosives in this area known as Tierra Caliente, revealed as a true minefield for greater terror of the local population.

Antipersonnel mines, reminiscent of strategies used in countries with major armed conflicts, thus join the arsenal of Mexican cartels that have increased their power and diversified their weapons to include many of those used by soldiers and armies at war.

Also read: Narcos of the CJNG and the Sinaloa Cartel kill more than 3 thousand people in 5 years

“Now organized crime uses artisanal mines on the roads and drones loaded with explosives. Then, either you take care of the ground you walk on, or you take care of what is above your head”, summarizes the situation for BBC Mundo Gilberto Vergara, parish priest of Aguililla, where Army troops were deployed in February to try to regain control.

Indeed, as violence has increased in Mexico, criminal groups in the last decade have adopted an increasingly militarized approach in their tactics and, above all, in their weapons.

From having old Soviet weapons in the past, the cartels went on to use everything from rifles characteristic of armies at war, to drones with more technologically-sophisticated explosives, going through the manufacture of their own armored vehicles or even submarines. And now, they also make shift mines.

For Robert J. Bunker and John P. Sullivan, authors of two books on the advances in the tactics of the Mexican cartels in recent years, and on the evolution of their weaponry with aerial explosive devices, the adoption of landmines or armed drones reflects “an escalation of potentially indiscriminate violence.”

“They represent significant potential threats to which the Mexican Army will have to respond and prevent before they proliferate among other groups within the country,” says Bunker, interviewed by BBC Mundo.

BBC Mundo requested comments on this issue from the Mexican Secretary of Defense (Sedena), which deployed troops to deactivate the mines in Michoacán, but received no response.

According to military authorities quoted by the daily El Universal, while searching the area they found homemade mines, placed about 150 meters from each other, and hidden not only on the outskirts of the communities but also inside them.

Read more: They arrest the leader of the CJNG in Colima, alias ‘El Chaparrito’

In a statement dated February 9, Sedena assured that “passability and social peace were restored” in Aguililla after soldiers entered the municipality “for the purpose of carrying out operations to strengthen the rule of law in the region.” but there was no mention of the discovery of the mines.

However, the mayor of Aguililla, César Arturo Valencia Caballero, was assassinated less than a month later.

“We have been working for months now, because the entire region was taken over, working with social programs (…) and progress is being made, people have already begun to return, they have harvested their crops, they are enrolling in welfare programs. However, tensions remain“, said the Mexican president, Andres Manuel Lopez Obrador.

How do they get these weapons?

The experts consulted place the beginning of this evolution and militarization of the weapons of organized crime in Mexico at the moment in which the Gulf Cartel deployed ex-professional soldiers for the first time years ago as part of Los Zetas, its former armed wing.

Also read: Juanito, cousin of the Treviño ‘El Huevo’, is the new leader of the Northeast Cartel

That was the trigger so that when a cartel tried to survive and compete against rival groups, it chose to reinforce its units using military-grade weapons, say the founders of the website for the analysis of conflicts and criminal groups in Latin America Small Wars Journal-El Centro.

In Bunker’s opinion, “this resulted in a ‘military cartel revolution’ that is still going on”.

The origin of these weapons can be three. In the past, Mexican cartels obtained weapons from Central American government arsenals such as assault rifles, grenade launchers, machine guns, anti-tank weapons and grenades.

Military-grade weapons manufactured in countries such as China, Russia, South Korea or South Africa arrived from an illegal market further afield. These trafficking lanes, however, are not as strong today as they were when the cartels were present in some ports in Mexico, Bunker notes.

On the contrary, a second and important current origin of these weapons is still the United States.

Thousands of 50-caliber Barrett rifles or semi-automatic rifles used by the cartels come from the country with which Mexico shares the busiest land border in the world, and are bought by intermediaries in that country to later be introduced into Mexico hidden in vehicles.

According to data from the Mexican government, each year more than 500,000 weapons are illegally trafficked from the US, and, in 2019 alone, they were responsible for more than 17,000 intentional homicides in Mexico.

For this reason, the Executive filed a lawsuit last year against a group of US arms companies that is continuing its course.

“They make weapons tailored to clients in Mexico who are dedicated to organized crime,” said President López Obrador at the time.

The origin of the weapons was visible in many events.

During the failed operation to capture Ovidio Guzmán López, son of Joaquín “el Chapo” Guzmán, in 2019, they were using weapons such as AK47 assault rifles or machine guns such as the .50-caliber Browning M2, one of the most powerful weapons used by US infantry

But a third origin of these weapons is, however, Mexico itself.

According to Bunker, “cartels have obtained weapons from corrupt police, military, and government officials. Even when military-grade weapons are seized from cartels by authorities, they are not always destroyed and can be returned to them for an agreed price.”

In recent years, the cartels have also increased their knowledge and capabilities to manufacture their own weapons such as the recent improvised landmines or armed drones. One of his main sources of learning is the interaction with other criminal groups.

“Sometimes you learn that in prison. Such tactical weaponry skills have been transmitted from groups such as the FARC in Colombia to CJNG, for example, when groups cooperate and form alliances”, highlights Sullivan.

Could interest you: CJNG will seek to expand on the border, after the arrest of the Treviño El Huevo

In fact, if there is something that, for experts, represents this militarization of cartel weapons and that is the best example of home-made weapons, it is those known as “monsters” or “narcotanks”.

“These armored vehicles have evolved from just having gun ports from which to attach gun barrels to fixed gun mounts (for .50 caliber Barrett machine guns and rifles) to rotating armored turrets that hold these weapons,” says Bunker.

Another example of this power is the use of drones, which has gone from being used as an improvised explosive device with point detonation to an element with aerial bombardment capabilities.

Last January, a video recorded from a CJNG drone made it possible to see the moment in which the device dropped several bombs on a camp in Michoacán, from which people fled in terror.

Jalisco Cartel, New Generation dropping small bombs from a drone on a target in Michoacán, Mexico.
People can be seen running away after the bombs hit the camp. #Mexico pic.twitter.com/5pYtg1V9B4

Power of the CJNG

In fact, the group led by Mencho is, today, the cartel considered to be the most operationally advanced in its arms race.

This is how they are in charge of showing it in videos in which they shamelessly exhibit, in broad daylight and even with their faces uncovered, part of their equipment as when they paraded in homemade tanks through Aguililla last year amid shouts of “Pure people of Mencho!” and “Now we walk those of the 4 (letters, in reference to the CJNG)”:

#CirculaEnRedes#Michoacan
Members of the #CJNG They walk around in an armored vehicle that they would have snatched from “Los viagras” in the area of #HotEarth pic.twitter.com/uujHRoj9X8

“These ‘shows of force’ are a display of power to impress the population and their rivals, but they also have real tactical utility. They are propaganda with real operational capacity”, Sullivan analyzes.

Looking ahead, experts believe the weapons specialization currently seen in the disputed Tierra Caliente region could spread to other areas of Mexico where criminal groups see a need for tactical advantage.

“Once there is a cartel definitely in control, the violence and innovation will be less pronounced. As the conflict moves to other fronts where the cartels compete, these new disputed areas they will become incubators of tactical innovation”, Sullivan predicts.

In addition, remember that Colombian groups that used landmines such as the FARC, the National Liberation Army (ELN) or criminal gangs such as the Clan del Golfo have interacted to varying degrees with the Mexican cartels. “Mines can be expected to continue to proliferate,” the analyst concludes.

Bunker points out, however, that the Mexican Army continues to have much more weapons power than the cartels in the form of tanks, artillery or helicopters.

One of its weak points, however, is that “the cartels engage in acts of corruption that undermine the institutions of the Mexican government. The units of the Ministry of Defense on the ground may be vulnerable to corruption if they are deployed in an area for prolonged periods,” he warns.