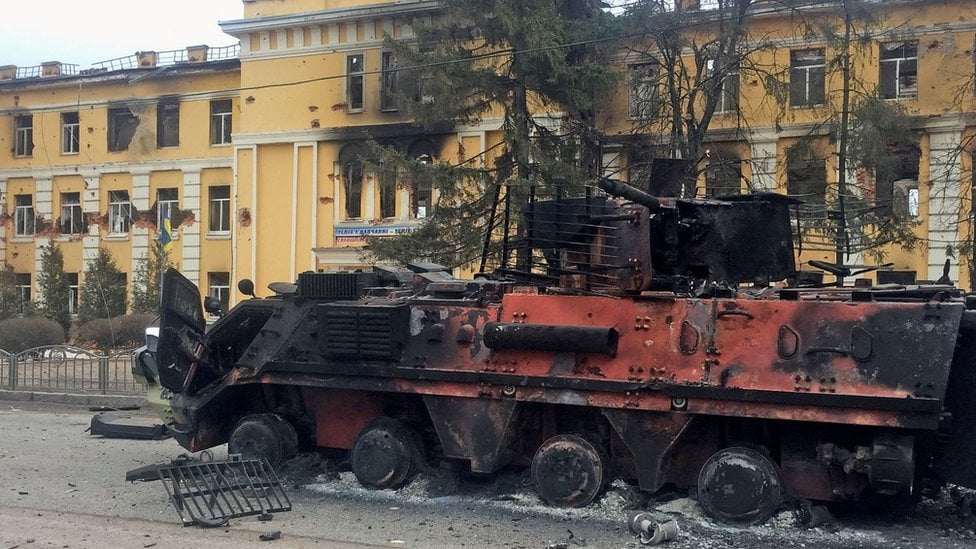 On the sixth day of the Russian invasion of Ukraine, satellite images show a huge Russian military convoy slowly approaching the Ukrainian capital, Kiev, from the north.

According to calculations, the military caravan is about 64 kilometers long and is made up of hundreds of armored vehicles, tanks, artillery and logistics support vehicles.

“Everyone around the world can see that convoy is on its way. There are even reports that is receiving more reinforcements as it approaches,” said Lyse Doucet, the BBC’s international correspondent in Kiev, on Tuesday.

According to the latest reports from correspondents, the convoy is about 27 kilometers from Kiev.

US intelligence services have warned that “the worst is yet to come” against Kiev and other Ukrainian cities.

The night of the fifth day

Civilians in Kiev headed for underground shelters as the alert spread across multiple districts of the capital.

Clive Myrie, a BBC correspondent, reported that the place where he was working was “rocked by missile fire” They fell so close that “windows rumbled.” Ukraine’s Interior Minister Denys Monastyrskyy told the BBC that “the situation is serious, but stable.”

This was the explosion that shook our base! #kyiv pic.twitter.com/yXOxtxaDqD

“In fact, every day the enemy sends more and more forces. But our glorious armed forces are basically destroying everything that reaches Kiev, which remains the main target to attack,” he added.

To deal with the invasion, the Ukrainian government seems ready to resort to all available resources.

In a televised speech broadcast on Monday night, President Volodymyr Zelensky announced that as of March 1 Entry to the country will be allowed without the need for a visa. to any foreigner who wishes to fight Russia.

Diplomacy also tries to find a way out of the conflict.

Ukrainian and Russian representatives held a first round of negotiations in Belarus on Monday, of which no details were disclosed, beyond the fact that there will be future meetings.

Most of the Russian forces were at the end of Monday about 30 km north of the ccapitalstopped by the Ukrainian resistance, according to the Ministry of Defense of the United Kingdom.

The images, taken before noon on Monday local time in Kiev, show military units near the Antonov airport, some 30 kilometers away from the center of the capital.

According to Maxar Technologies, the company that released the photographs, the convoy has about 64 kilometers long and contains “hundreds of armored vehicles, tanks, artillery and logistics support vehicles.”

To the west and northwest of Kiev, satellite images show destroyed armored vehicles and a damaged bridge near Irpin and Stoyanka.

In addition, Maxar added that new photos show troops on the ground and attack helicopters in southern Belarus, less than 30 kilometers from the border with Ukraine.

It was also on Monday night and after the images of the convoy were known that the United States intelligence services warned that “the worst is yet to come” to Kiev, Kharkiv and other Ukrainian cities.

The offensive on Kharkiv

Russia is attacking Ukraine on several fronts, but its advance has been slowed by Ukrainian resistance

The second largest city in Ukraine, Kharkiv, has been one of the most punished for the attacks, which continued this Tuesday with a bombardment on a government building during which at least 20 people were reported injured.

India’s foreign ministry reported that an Indian student had been killed in Tuesday’s attack.

Local authorities and the Ukrainian Interior Ministry have repeatedly said that civilians are dying from “massive rocket attacks” on that city, but the exact figure is not known.

Images posted by civilians on social media showed an artillery explosion that some defense analysts described as typical of a attack with bombs of cluster in a densely populated urban area.

Russia has denied it is targeting residential neighborhoods.

Several Kharkiv women told the BBC how their lives have been shaken by the bombing.

“We have been hiding in a basement for four days. And this only gets worse. We are running out of food“, said Alena, who has been confined with her two children without being able to leave the house.

Svetlana has also been taking refuge, but in the Kharkiv metro.

“The woman behind me has a small child in a stroller, can you imagine what it is like to be in this condition? And the shooting doesn’t stop,” she commented.

Maryana, for her part, stated that she has not been able to stop crying. “I have never been a religious person, but now I pray and ask the whole world to pray for Ukraine,” she said.

Elena and her daughter, on the other hand, did manage to escape from Kharkiv shortly after the bombing began.

“We woke up and we were under attack. It was incredibly scary. We are asking you to stop this war against the people of Ukraine,” she commented.

Shells landed near a city shopping center on Monday as street fighting continued.

Peter Zeihan, an American expert on geopolitics, highlighted in a message on his Twitter account that in Jarkiv there is no military base.

President Zelensky on Monday accused Russia of committing war crimes in Kharkiv and said that the account of dozens of eyewitnesses suggests that the Russian artillery attacks are part of a “deliberate” attempt to destroy the population.

Other cities under attack

Ukrainian officials said Russian troops launched a assault on the city of Khersonlocated in the south of the country about 550 kilometers from Kiev.

Previously, the Ukrainian service of the BBC had reported that loud explosions were heard near the airport in that city.

Kherson regional authorities said via Facebook that the city is surrounded, but had not been captured.

“It is difficult to know how the situation will develop,” Kherson Mayor Igor Kolykhaye wrote, noting that Russian forces had set up checkpoints at all entrances to the city.

According to Alena Panina, a journalist based in Kherson, to the Ukraine 24 network, in that city they still have electricity, water and heating, but difficulties are expected as food reserves for the 300,000 local residents are saved in warehouses on the outskirts of the city.

A video shows huge clouds of smoke in a burning shopping center in Chernihivanother city that has been under pressure from the Russian offensive.

A teacher at a school in that city, Oksana Buryak, told the BBC that the situation was “like something out of a horror movie”.

“Our hearts are broken we do not understand anything. For the fifth day, we, my country, my people, my family, my parents and my brother, my beloved son, are living in fear in subhuman conditions.”

Ukrainian officials said Tuesday that about 70 soldiers died in an artillery attack Russian on a Ukrainian military base in the city of Okhtyrka, in Sumy province, about 350 kilometers east of Kiev.

Rescuers work to find survivors in the rubble.

In a video posted on Twitter by the Ukrainian Emergency Services, it is possible to see the ruins of the military base.

Ukraine’s ambassador to the United States told U.S. lawmakers Monday that Russia has used a thermobaric weaponprohibited by international conventions.

“They used the vacuum pump, which is prohibited by the Geneva Convention,” said Oksana Markarova.

The BBC has not been able to verify this information..

These types of weapons do not use conventional ammunition.

Instead, they contain a high-pressure explosive and absorb oxygen from the environment to generate an extremely powerful explosion and shock wave.

According to the Human Rights Watch organization, its use has been seen before in the Chechen Republic.