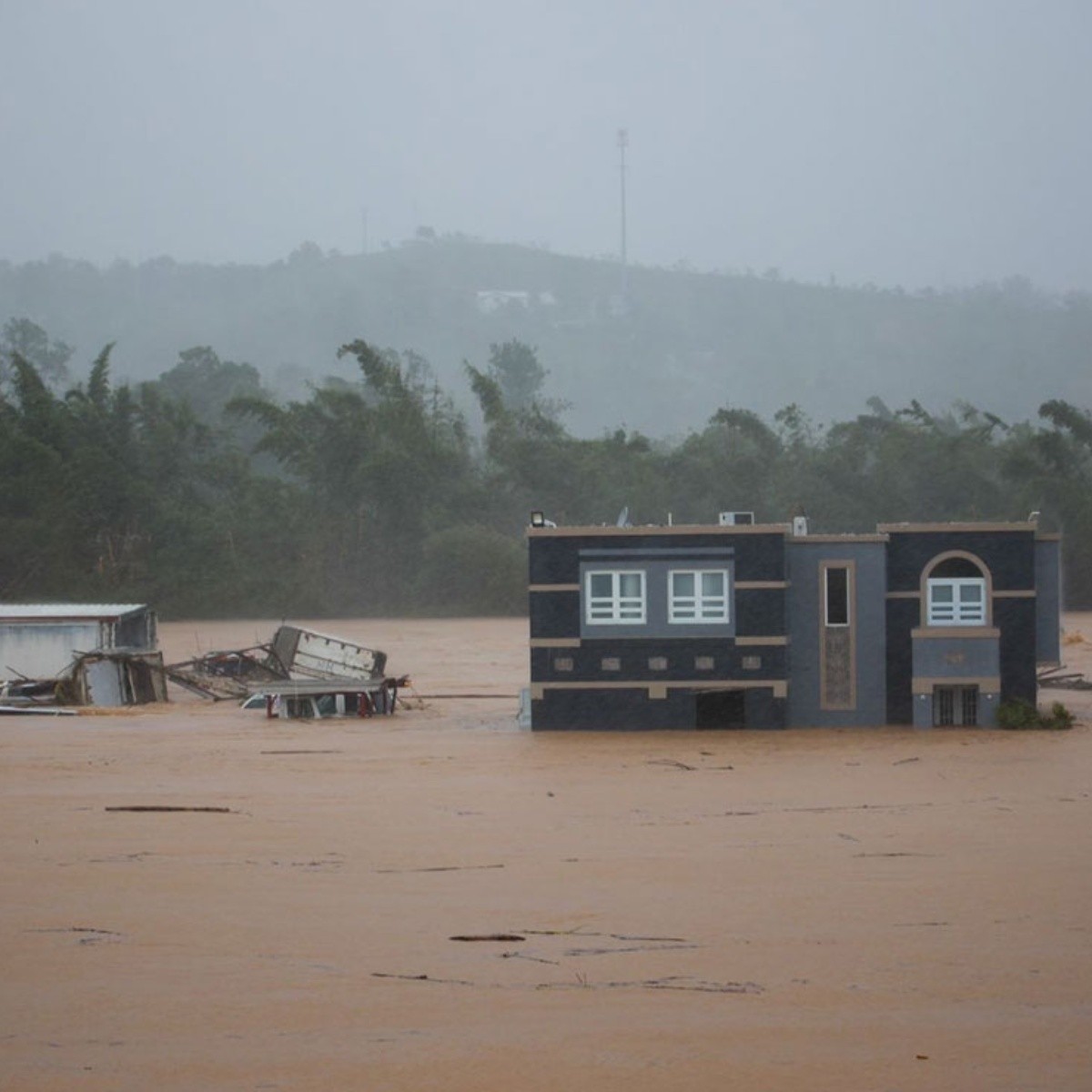 Hurricane Fiona made landfall Sunday on the southwestern coast of Puerto Rico, causing avalanches and a widespread blackout, ripping asphalt from roads and scattering debris.

Forecasters said the storm would cause catastrophic flooding and “historic” levels of rainfall, up to 25 inches (64 centimeters) in isolated areas.

“The damage we are seeing is catastrophic,” said Governor Peter Pierluisi. In the northern city of Caguas, at least one large mudslide was reported, in which water passed through a broken asphalt slab and fell into a ravine.

The storm also washed out a bridge in Utuado, a mountain town in the island’s center. The police indicated that the National Guard had installed the bridge after the passage of Hurricane Maria in 2017.

The vortex of Fiona was located 85 kilometers (50 miles) southeast of Punta Cana, Dominican Republic, and had maximum sustained winds of 140 kilometers per hour (85 miles per hour), according to the United States National Hurricane Center (NHC). , for its acronym in English). It was moving northwest at nine mph (15 km/h).

Fiona landed on the 33rd anniversary of Hurricane Hugo, which hit Puerto Rico as a Category 3 storm.

Clouds from the meteor covered the entire island, and tropical-storm-force winds extended up to 220 kilometers (140 miles) from Fiona’s vortex.

US President Joe Biden declared a state of emergency in Puerto Rico as the eye of the storm approached the southwestern tip of the island.

Hurricane Fiona made landfall along the extreme southwestern coast of Puerto Rico near Punta Tocon (15 mi southeast of Mayaguez) at 320 PM EDT. Maximum sustained winds at landfall were 85 mph and the central pressure was 986 mb or 29.12″. Fiona is moving to the northwest at 9 mph pic.twitter.com/TMFDQXNO9z

“Current weather conditions are extremely dangerous and are hampering our ability to assess the situation fully,” the company said, adding that it will take several days to fully restore power.

The health centers were operating on generators, some of which had broken down. The Secretary of Health, Carlos Mellado, indicated that the service crews are working to repair the generators in a center for cancer patients.

Fiona arrived just two days before the anniversary of Hurricane Maria, a deadly Category 4 storm that hit the island on September 20, 2017, destroying its electrical infrastructure and killing 3,000 people.

Over 3,000 homes still have tarps as roofs, and infrastructure remains weak.

“I think that all of us Puerto Ricans who live in María have that post-traumatic stress of what is going to happen, how long it is going to last, and what needs we could go through,” said Danny Hernández, who works in the capital San Juan, but had planned to weather the storm with his parents and his family in Mayagüez.

The mood was somber at the supermarket as he and others ensured they had everything they needed before the storm hit. “When Maria, we all experienced scarcity to some degree,” he recalled.

The hurricane is forecast to hit cities and towns along Puerto Rico’s southern coast that have not yet fully recovered from a series of strong earthquakes that began in late 2019.

Authorities reported the closure of several roads on the island, as fallen trees and small landslides prevented access.

More than 780 people with about 80 pets had gone to shelters across the island by Saturday night, mostly on the south coast.

Puerto Rico’s electrical grid was devastated by the passage of Hurricane Maria and remains fragile, as its reconstruction only recently began.

In El Combate, a town in the southwest of the island, Tomás Rivera, a hotel co-owner, said he was prepared but worried about the “giant” amount of expected rain. He noted that a nearby wildlife refuge was eerily quiet.

“Here, there are thousands of birds, and they are not seen,” he said. “Even the birds have realized what’s coming and are getting ready.”

Rivera said that his employees took some of his relatives to the hotel, where he stocked up on diesel, gasoline, food, water, and ice, considering how long it took the government to respond after Hurricane Maria.

“What we have done is prepare ourselves to depend as little as possible on the central government,” he said.

It is something similar to what Ana Córdova, 70, thinks. She arrived at a shelter in the town of Loiza, in the north of the island, on Saturday after buying large amounts of food and water.

“I don’t trust them,” he explained, referring to the government. “I lost confidence after storm Maria passed.”

Pierluisi activated the National Guard as Fiona approached. “What worries me the most is the rain,” said meteorologist Ernesto Morales of the National Weather Service in San Juan.

Forecasts indicated that Fiona would drop between 30 and 41 centimeters (12 and 16 inches) of rain in eastern and southern Puerto Rico, with up to 64 centimeters (25 inches) in isolated areas. Morales noted that rainfall from Maria in 2017 reached 102 centimeters (40 inches).

Pierluisi announced on Sunday that public schools and government agencies would remain closed on Monday.

According to forecasts, Fiona would brush the Dominican Republic on Monday and later northern Haiti and the Turks and Caicos Islands with threats of heavy rain. On Tuesday, she could pose a risk to the southern tip of the Bahamas.

A hurricane watch was issued for the east coast of the Dominican Republic, from Cabo Caucedo to Cabo Francés Viejo.

Authorities said that Fiona previously hit the eastern Caribbean, leaving one dead in the French territory of Guadeloupe, after a flood swept away her home. The storm also damaged roads, downed trees, and destroyed at least one bridge.

Flooding and downed trees were also reported in Saint Kitts and Nevis, but authorities announced that the international airport would reopen on Sunday afternoon. According to the Caribbean Disaster Emergency Management Agency, dozens of customers remained without electricity or water service.

In the eastern Pacific Ocean, Tropical Storm Madeline was expected to cause heavy rain and flooding in parts of southwestern Mexico. On Sunday morning, the vortex of the meteor was located about 250 kilometers (155 miles) south-southwest of Cabo Corrientes, with maximum sustained winds of 75 km/h (45 mph).