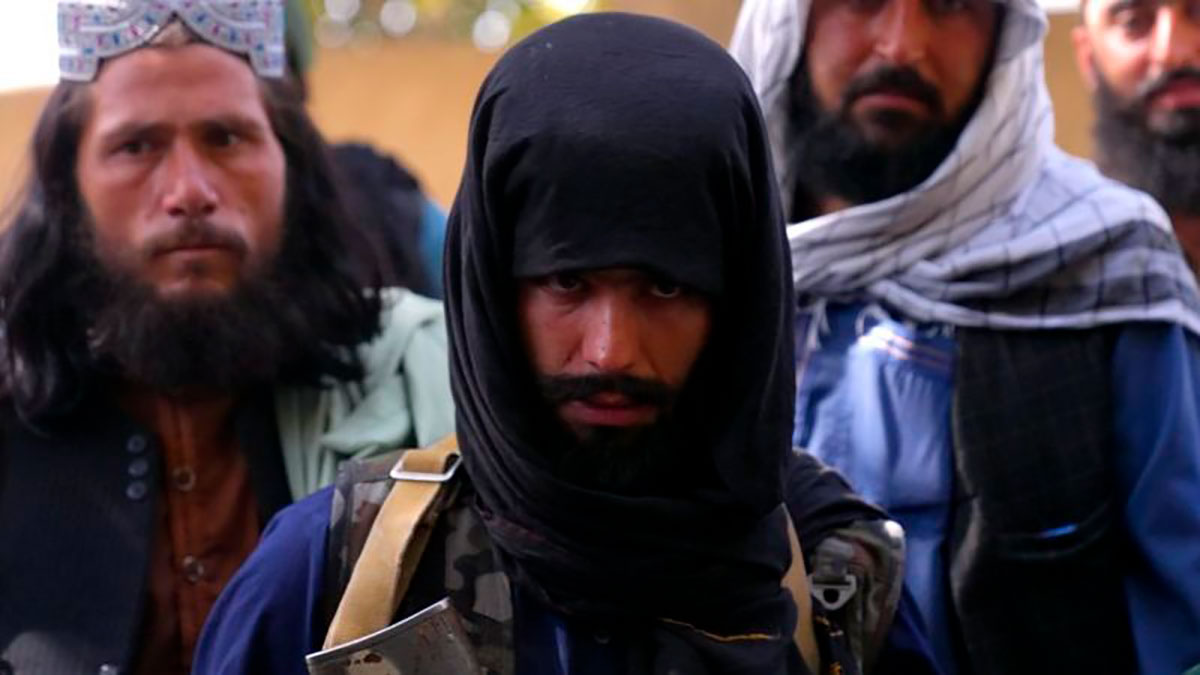 The Taliban fighters we met are only half an hour from one of Afghanistan’s largest cities, Mazar-e-Sharif.

The “ghanimat” or spoils of war that they show us includes a war vehicle, two trucks and a series of powerful machine guns.

Ainuddin, a former madrasa (religious school) student who is now a military commander, stands in the center of this heavily armed crowd.

The insurgents have captured new territory. International troops have been withdrawing. And, in the middle, there is a terrified population.

Tens of thousands of Afghans have fled their homes, and hundreds of them have been killed or injured in recent weeks.

I ask Ainuddin how he can justify the violence, considering the pain it is causing in the people on whose behalf they claim to fight.

“It’s a fight so people are dying“, He responds coldly, adding that the group is doing everything possible” not to affect civilians.

I tell him that it is the Taliban who have started the fighting.

And he replies: “No, we had a government and it was overthrown. They [los estadounidenses] the fighting began ”.

Ainuddin and the rest of the Taliban feel they are in for a good time: They are on the cusp of re-dominating Afghanistan after being toppled by the US-led invasion in 2001.

Kabul’s “puppet government”, Ainuddin tells me, “has not renounced Western culture … and if it does not, we have to kill them.”

Shortly after we finished speaking, we heard the sound of helicopters above us. Cars and Taliban fighters are rapidly dispersing. It is a reminder of the continuing threat posed by the Afghan air force to the insurgents, and that the battle is still far from over.

We are in Balkh, a city with ancient roots; the birthplace of one of Islam’s most famous mystical poets, Jalaluddin Rumi.

We passed through here earlier this year, when the area was still controlled by the government, but the villages on the periphery were in the hands of the Taliban. Now this is one of 200 districts that have been captured by militants in this latest offensive.

Haji Hekmat, a local Taliban leader and our host in Balkh, is determined to show us that everyday life goes on.

The bazaar is still packed with people, both men and women.

There are places where women can only attend the market with a male companion, but here, although they wear the full burqa, which covers their hair and face, many are seen.

Haji Hekmat insists that no one is being “forced” and the Taliban are simply “preaching” that this is how women should dress.

I have also been told that taxi drivers have been instructed not to take a woman into town unless she is fully covered.

The day after our departure, a young woman is reported to have been murdered because of her clothing. But Haji Hekmat rejects the allegations that Taliban members were responsible.

Many in the bazaar express their support for the group and their gratitude to them for improving security. But with the Taliban fighters accompanying us at all times, it is difficult to know what the residents really think.

What changed and what didn’t

The government remains in control of Mazar-e-Sharif, the country’s fourth-largest city, and almost everyone I spoke to expressed concern about what the resurgence of the Taliban will mean, especially for “freedoms” with those that the younger generations have grown up with.

But in the Balkh district the Taliban are formalizing their own government. They have taken all the official buildings of the city, except a large police complex now abandoned.

It used to be the headquarters of a staunch rival, the local police chief, and was partially destroyed in a suicide bombing by Taliban militants as they were fighting for control of the area.

The face of the Taliban district governor, Abdullah Manzoor, lights up with a wide smile when he talks about the operation, as his men laugh. The struggle here, as in so many places in Afghanistan, is personal as well as ideological.

Some things have not changed since the Taliban took office. Orange-clad street cleaners continue to show up for work, as do some bureaucrats. Only they are supervised by a different mayor: a Taliban militant.

Here you can see the military everywhere, even some who supervised the interviews we did.

On radio stations that used to play a mix of Islamic music with popular hits, now there are only religious songs.

Haji Hekmat, the Taliban leader, says that have banned music promoting “vulgarity” from being played in public, but he insists that people can, privately, continue to listen to whatever they want.

However, I was told of a man who was caught listening to music in the bazaar and, to punish him, Taliban fighters are said to have made him walk barefoot in the scorching sun until he lost consciousness.

Hekmat insists that no such thing has happened. As we leave the station, he points to some of the young men who work there, indicating that they do not have beards.

“You see! We are not forcing anyone, ”he says, smiling.

It is clear that the group wants to give a softer image. But in other parts of the country the Taliban behave much more strictly. The differences may depend on the attitudes of the local commanders.

With reports of extrajudicial killings for revenge and other human rights abuses, the Taliban have been warned by Western officials that they risk turning the country into a “Pariah stateIf they try to take it by force.

What many associate with the Taliban’s previous stage in power are the brutal punishments applied based on the sharia.

Last month, in the southern province of Helmand, the group hung two men accused of child abduction from a bridge, justifying it by saying they had been convicted under sharia law.

In Balkh, the day we visit a Taliban court session, all the cases are related to land disputes. Although many fear its form of justice, for others at least it offers the possibility of a faster resolution than the government system, which is notoriously corrupt.

“I have had to pay a lot of bribes,” complains one of the litigants, commenting on his previous attempts to solve the case.

Taliban judge Haji Badruddin says he has yet to order any corporal punishment in his four months in office, stressing that the group has a system of appeals courts to review the most serious verdicts.

Badruddin defends even the harshest penalties. “In our sharia it is clear: for those who have sex and are not married, be they a girl or a boy, the punishment is 100 lashes in public.”

“But those who are married must be stoned to death … For those who steal: if it is proven, their hand must be cut off.”

The judge opposes the criticisms that dismiss the punishments as incompatible with the modern world.

“The children of the people are kidnapped. Is that better? Or is it better to cut off a person’s hand and thus give stability to the community? “

For now, despite the rapid advance of the Taliban, the government continues to control Afghanistan’s largest cities. Prolonged and increasingly deadly violence is likely in the coming months.

I ask Haji Hekmat if he is sure that the Taliban can win militarily. “If he responds. “If the peace talks are unsuccessful, we will win, God willing.”

Those talks have, in effect, stalled, and the repeated demand by the Taliban to create an “Islamic government” appears to amount to a call for their opponents to surrender.

Hekmat concludes: “We have defeated both the foreigners and our internal enemies.”