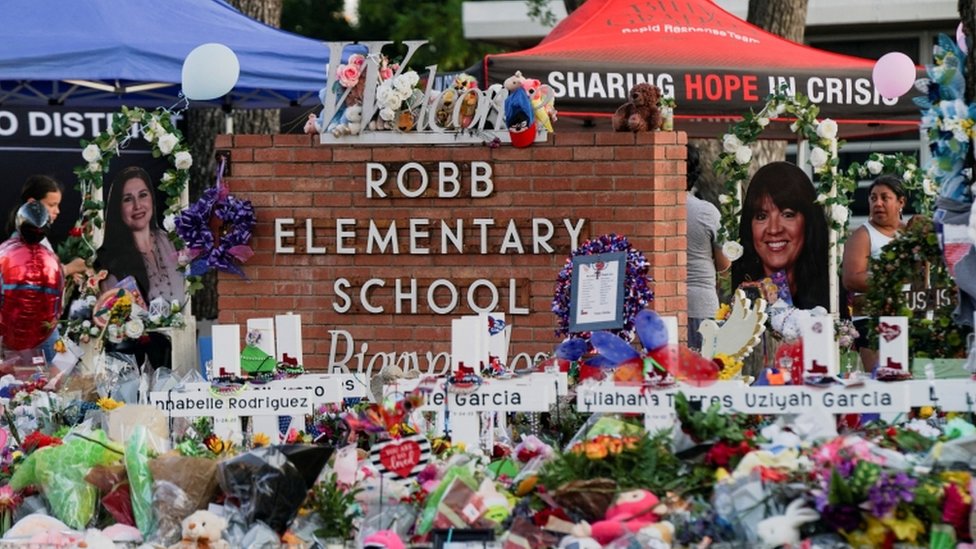 The massive attack at Robb Elementary School in Uvalde, Texas, which left 19 children and two teachers dead on May 24, reignited the debate about what measures to take to stop the violence.

The Ohio State Congress reacted quickly and passed a controversial law on June 1 that will allow teachers and other school personnel carry weapons at school.

The rule overturns a 2021 state Supreme Court decision that required teachers to receive weapons training equivalent to that received by police officers.

If the governor signs the law, teachers who voluntarily choose to carry weapons in schools will be required to complete only 24-hour training.

But What do teachers think about bringing weapons to school?

We asked Puerto Rican teacher Rosa Morales Cruz, who has been teaching Spanish as a second language for a decade in Cleveland, Ohio, and who is the executive director for educational issues of the teachers’ union in that city.

after this last shooting massive in Texas, are you afraid to teach?

Not because we have created a positive environment in the school. We have taken it upon ourselves to prevent these situations by building a good connection with our students. So I’m not afraid of them attacking the school.

It is very terrible and unfortunate what happened in Texas, but I believe that a connection between the community, the school and the students is needed for them to feel good and to prevent these things.

But I am afraid because we don’t feel safe in general. These events have not only occurred in schools. They are happening in the cinema, in the squares, in the shopping centers, in the churches, in the hospitals, in the places where you have to feel safe.

Is arming teachers a good solution?

Arming the teachers is a very bad idea. We already have the concern of meeting the standards required by the State, which are, for example, making sure that students have an appropriate reading level.

Our duty as teachers is to educate students. If they had told me that to be a teacher you need to be armed, I would not have become a teacher.

Today we teachers have become psychologists, parents to our students, we have cooked when they are hungry, we have been doctors… the role of teacher is not simply that of teacher. They keep demanding more and more of us and it exhausts us.

It is very sad because so much is already being asked of the teacher, that now we are also required to carry a weapon. They bring out that ambition and passion that we have for being educators. 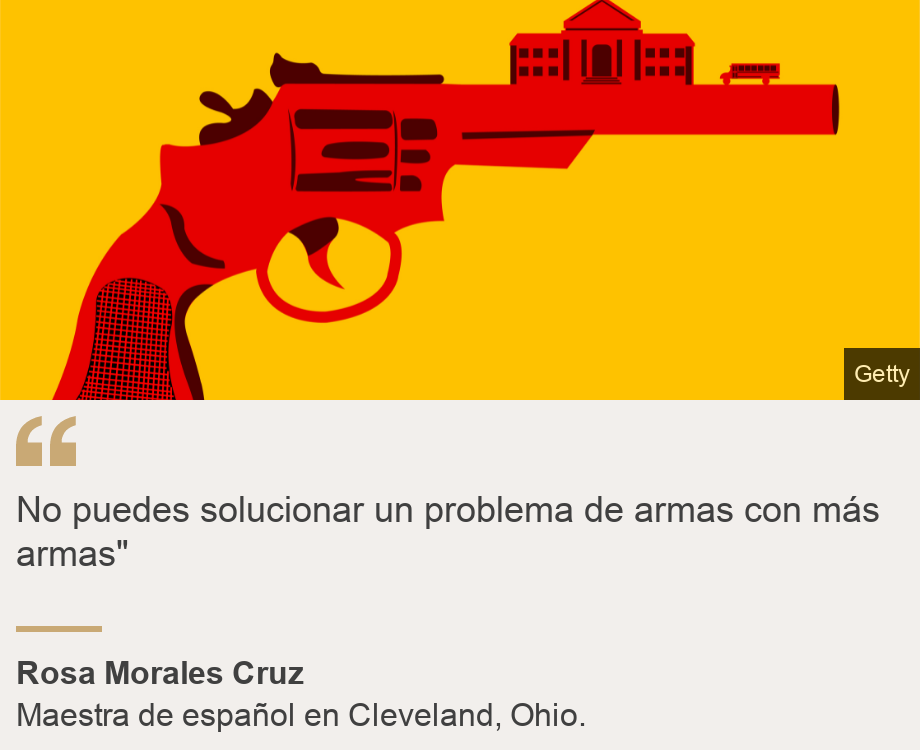 We are talking about training individuals in an educational area to carry deadly weapons. If I had wanted to train to kill or protect, I would have been a soldier.

We already have a protocol in case something like this happens and know what to do. But loading a weapon during the hours that we are in our educational environment is dangerous.

Can you imagine a student stealing our gun or fighting with us to get it? Or that we leave the weapon unattended for a moment and someone else picks it up? Or that the school becomes a battlefield?

You can’t fix a weapon problem with more weapons.

Telling teachers that they need to have guns and weapons to protect students and to prevent mass shootings is like telling victims to put on more clothes so they don’t get raped.

The problem is not the victim. The problem is the law that we have with which people acquire weapons. Why can a student at 18 buy guns but not alcohol?

If the governor promulgate this law, would you feel obliged to carry a weapon?

No. I would stop being a teacher.

And it would force me to take my children out of public school and put them in a private school where I know that there is a security system with people trained to protect my children and that the teachers can teach and provide the education they deserve.

It is so sad that our youth today see so much gun activity in the community that they also have to see their teacher carrying guns.

I don’t think that makes a student feel safe, but it makes them wonder: why is he carrying a gun? Will I be safe at this school?

Do you know teachers whoYo would they arm themselves?

No. I am part of the teachers’ union and the executive committee of the school district, and no teacher is willing to have weapons in school.

Even those who have guns in their homes say they don’t feel safe bringing their guns here.

I believe that we would not be worried about educating our students, but worried about our weapon. They are a distraction in an environment that is supposed to be positive and welcoming.

(The reasoning is) I carry a gun because if someone comes I will protect you. But that person should not come to my classroom. The entrance and exit areas are the ones that have to be protected. Police are needed around the schools to make sure this doesn’t happen.

And why do you think that for many people, including legislators, arming teachers is the solution?

Recently there was a massive attack on a hospital. Did they ask the doctors to have weapons? No. They acquired more police and more security for the hospitals.

Why do these rulers like weapons and seek a quick solution without studies, without analysis and without evidence?

They create laws that do not affect them. They are not the people who are inside the classrooms listening to the stories and trauma that our students experience. 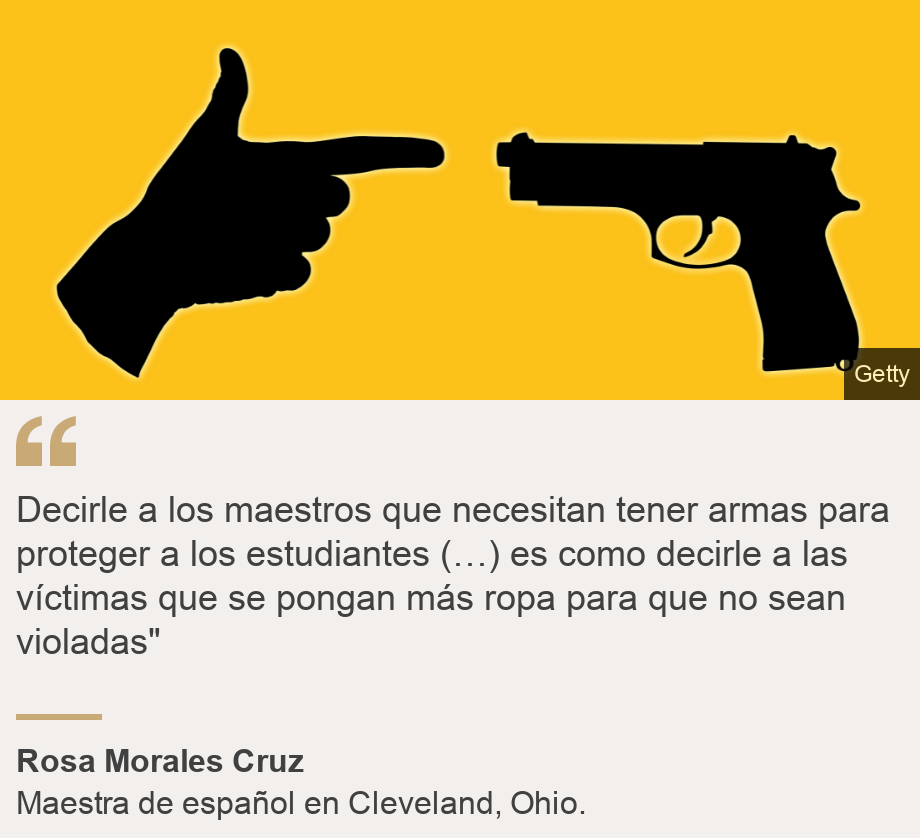 what do yous would you ask the authorities?

I would ask the governing authorities to implement this program that they are imposing on teachers in the security department of the educational system.

There are no funds for school resources but there are funds for weapons training. That they give that training and license to carry weapons to the people who are in charge of security. That’s the solution.